A ‘Breathtaking’ Day: The past and future collide on an unforgettable hike to Breakey Lake and a piece of family history 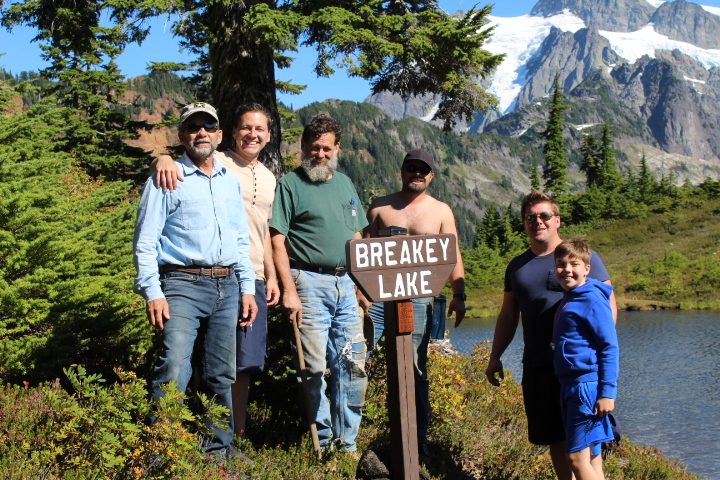 Buck and all the Breakey men can recall in vivid detail the feeling of stepping into a clearing and seeing Breakey Lake for the first time. Months of planning and frustration melted away when they finally got out on the trail and the picturesque backdrop came into sight. All that was left was a moment of great clarity and emotion for generations of the family.

Breakey Lake was named some 90 years ago after Glenn Breakey, a teacher from Bellingham and the first cousin of Buck’s father, who is affectionately known as just “Pop.” The lake is a landmark and a connection to decades of family history, so the chance to see it and swim in its waters again was moving.

“I think I was the most excited breaking out at the end of the trail at the lake,” Buck said. “I had fun swimming in the lake for the first time, but breaking out of the trail, seeing the lake, and going, ‘WOW, this is Breakey Lake.'”

Buck wanted his own sons Andy, Bud and Caleb to experience that piece of history, but he also wanted to share an experience with them like the many he shared over the years with Pop and his uncle Bud.

Those memories were on Buck’s mind as he worked tirelessly to make the hike happen and got choked up at several points throughout the day. He and his brother, Lee, were like kids again and got to recreate some of their best memories with the next generations.

“It was reminiscent of the Breakey men going on a hike together,” he said. “We started Breakey hikes with Pop and Uncle Bud. We had a great time doing that together for about 15 years. And then about the time Pop and Uncle Bud got a little too old to hike, is when Andy, Bud and Caleb got old enough for it.”

The Breakey Lake hike was a year and three postponements in the making, and it came on the heels of a previous hiking experience where Buck and his sons had to be found and rescued. They were 12 miles into that hike when a storm came and washed away the trail, leaving them stranded with no indication of where to go next.

“We didn’t have the best experience with hikes,” Caleb said with a laugh.

This time, the hike was shorter and the traveling party was bigger.

Lee brought his son, Jake, and his grandsons, Bronson and Luke, and Chris Hoag made the trip with his sons, Hunter and Fisher. The biggest challenge was getting everyone together, first through their own busy schedules, then through a storm, then lingering snow that closed the trail, and later a global pandemic that changed everything.

“I kind of had to resolve myself and I said, ‘You know, I’ll anticipate it for another year,’” Buck said. “Then the COVID thing happened and I was getting kind of discouraged. But the day we hiked, it worked out perfectly.”

Buck has never been the overly excitable type, but it was clear all along how much the hike meant to him. That was especially true when the elements failed to cooperate and threw the whole thing into question.

“It’s really rare for me to see my dad genuinely oozing with excitement,” Caleb said. “When I looked at Dad and heard him talk about the hike, planning details for it, and going the extra mile, I said, ‘Oh my goodness, this is very important to you.’

“It was pretty cool to see it mean so much. It also made it pretty hard when we had to cancel.”

In typical Breakey fashion, their arrival at the path to Breakey Lake wasn’t the end of their troubles. When they got there, the trail wasn’t visible and a distinct “Here we go again vibe” set in as they hunted for a starting point, which Buck eventually found.

“There was some growing anxiety and frustration,” Andy said. “But as soon as we found the direction, the first time he saw it, he threw his hands up in the air and screamed, ‘Yahoo!'”

The hike was a little tougher than most of them expected, including the final descent to the lake down a rocky hillside, but it was infinitely more rewarding. The magnitude of the experience and the history they were experiencing was apparent every step of the way.

Buck’s sons also couldn’t help but watch and appreciate the experience even more for their dad. In Bud’s eyes, the Breakey family’s past and future were colliding.

He felt the nostalgia of the hikes he shared with his Pop and Uncle Bud, and also soaked in the joy of the next generations.

“It’s neat to see a guy who has been to almost every single state in the U.S., who has traveled immensely and done a lot of things in life, get to see something that was more than just a lake or hill,” Bud said. “It was like stepping back in time.”

“It was awesome to be part of history. When you’re flashing back, you’re walking someplace where some of our family did 70-90 years ago. We were walking that exact same path and swimming in the same spot other Breakeys pioneered.”

The whole crew descended the hillside and took a brisk swim in Breakey Lake. They marveled at the unbelievable view that Bud said reminded him of a “fairytale,” and they put up a new Breakey Lake sign to mark the occasion. It was an incredible experience for all of them that was magnified by the powerful surroundings.

“It was just breathtaking and jaw-dropping,” Bud said. “It was neat to step back and really see the glory of it. I believe God created everything out here. When you get that view, it gives you a little more taste of how big He is and how little we are.”

A couple weeks after the hike, Andy’s family went back on a hike of their own with plans to try and make it an annual family event. Maybe some of the others will try and hike the trail more often, which is perhaps the real gift that came from Breakey Lake.

Buck and Lee shared that piece of family history, and they spent the better part of the day reliving some of their favorite memories.

“The fun and exciting part of it for me personally was to take my son up there and be able to tell him about the history of it, especially seeing my dad,” Andy said. “It’s always fun seeing your dad in his 60s with his brother acting like little kids. The first thing they did was drop their drawers and take a leak in Breakey Lake, but it was fun sharing all that.”

What a time for a Breakey family reunion and a renewed appreciation for a bit of history that can make the family a little stronger for years to come. Andy, Bud and Caleb will share those laughs and stories with their kids, just as Buck and Lee did so often with Pop.

“There’s this great quote that goes, ‘I wish someone would tell you that you are in the good old days before you actually leave them,’” Caleb said. “That’s what this felt like.” 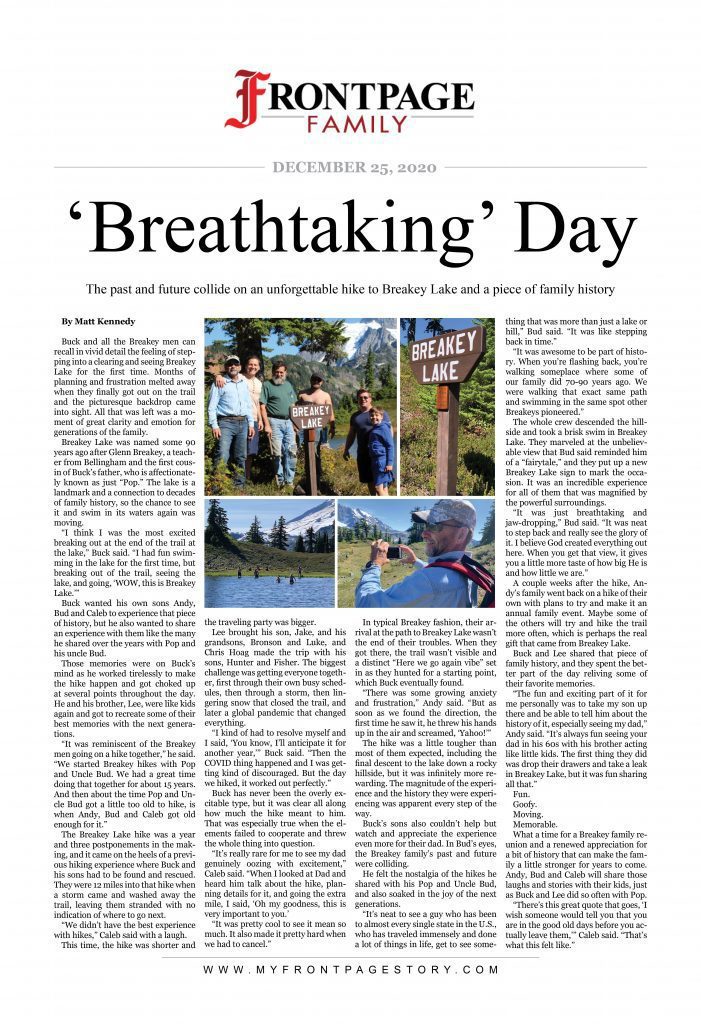