Alyssa Williams: Supermom – “She has been the glue that has held our family together”

He was the football player, and she was the cheerleader. Raycell and Alyssa’s love story began in high school and will live on for eternity.

Although the two weren’t friends at first, in their junior year they began talking and immediately hit it off. For Raycell, Alyssa was unique. Not only did she have a lot of strength, but she had compassion that was immeasurable.

Since then, the pair made it official. First, in dating, and then in marriage. Over the years, Raycell and Alyssa have shared memories that will never be forgotten. From vacationing in the Bahamas, long drives to Las Vegas, and everything in between, Raycell has never felt happiness that equates to making memories with Alyssa. No matter the event, it becomes something that the two will share forever.

On the contrary, Raycell admires that in addition to making memories with him, Alyssa always makes time to hang out with friends, family, and herself.

In fact, he especially appreciates the time that she puts into crafting and hosting craft fairs. After putting all of her effort into their family, Raycell is overjoyed to see Alyssa make time for herself happy as well.

As a mom of three with twins, it is no easy task to ensure that everything runs smoothly in their household. But Alyssa does it with ease and never complains. “She does it better than any parent in the world with amazing patience and compassion,” Raycell said.

Even when exhausted at times, Alyssa can always be seen lending a hand to others and extending herself to help her family. Her son, Rayden, especially loves the time that his mom spends helping him with stuff for his classroom.

Alyssa’s perseverance to juggle it all inspires Raycell every day. Extremely hard working, she refuses to quit, “which is highly commendable,” Raycell said.

And for this, Raycell is inspired by Alyssa every day for her strength, kindness, and enormous heart. Not only is she the lifeline that pulls the family out of tough times, but she is the light that always brightens up their home.

She means the world to both Raycell and the kids and they love her more than she can ever imagine. After everything that she does for them, they hope to return the favor by emphasizing the love that they have for her.

“With all the ups and downs she has been the glue that has held our family together and we are truly blessed to have a woman like her in our life.” – Raycel 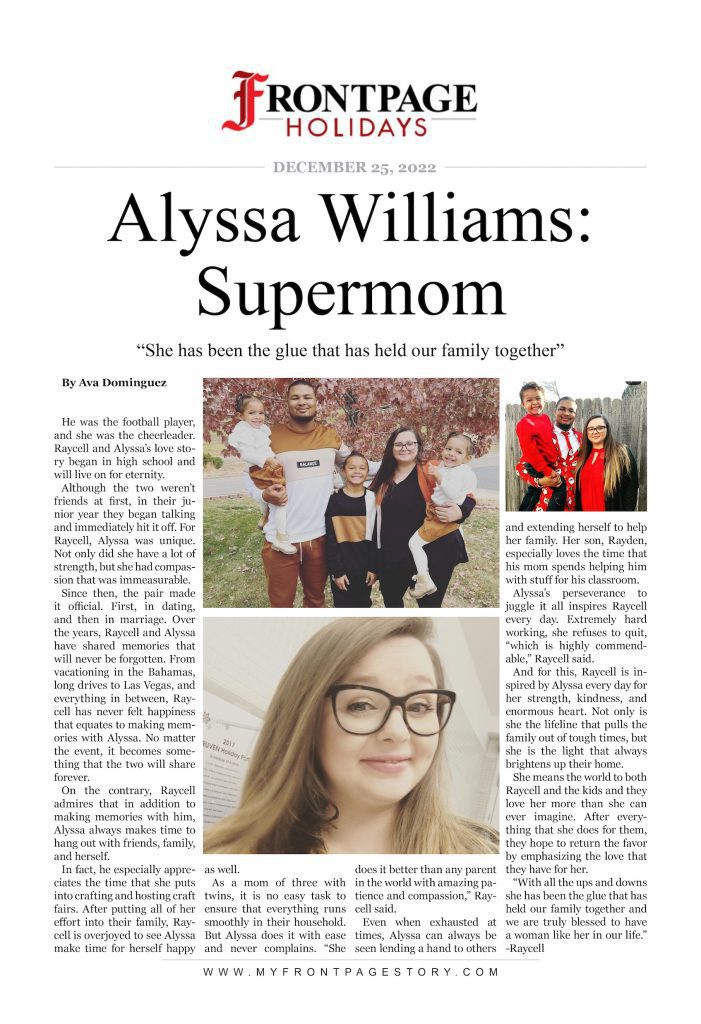