Amazing Dad: Stephen Groven is a friend, a mentor, a listener and a rock of support for his family

Joseph Groven will never forget one of the biggest moments of his life because of the privilege he had of sharing it with his father. Even if going “blue” with the Army made Joseph the black sheep of an Air Force family, Stephen Groven listened to his son, bought into his decision and was there to swear him in.

Stephen’s role in the buildup to that moment wasn’t unlike many others before it, either.

He was military tough, but was also comfortable in his own skin and a tremendous listener who was there for his kids however they needed him to be. Joseph had to do a little convincing about joining the Army while the United States was at war, but Stephen heard him and gave him his full blessing to chase the dream.

“Once he started to understand that was something I needed to do for myself, he was right there with me,” Joseph said. “He was there for my swearing in, then when I became an actual infantryman.

“They call it turning blue where you get the blue chord, and he was able to do that as well. It’s one of my greatest moments to have my dad there with me and to see the aura of pride coming off him. It was pretty deep.”

Depth is a good word to begin describing Stephen Groven and his approach to life. Charismatic would be another, along with friendly, spiritual, honest, attentive, down to earth and emotionally available.

He set boundaries for his kids — Tim, Dan, Stephanie, Jessica and Joseph — but was sure to guide them and explain why. The kids felt loved, but understood what the rules were. His communication was impeccable.

“If there’s ever something he wants to get across, he’s able to communicate it,” Joe said. “It’s not clear as mud. It’s shinier than a diamond.”

Stephen has taken all those parenting skills and applied them now as a grandfather to 13 grandchildren who run a full range from 21 years old to not-yet-born. He isn’t the type to fill them up with sugar, say yes to everything, then hand them back to his kids. Stephen connects with all of them and still relishes his role as a teacher.

More than anything now, Stephen and Marilynn are enjoying their well-earned retirements, though Stephen’s is more of a semi-retirement as a part-time postal clerk in tiny Hartland, Minn. He spends his time now kayaking and chatting up postal customers who walk into the building with letters and walk out with a new friend.

Boiled down, that’s exactly what Stephen has been to his family: A friend who supported, encouraged, listened, loved and handed out tough love. This Father’s Day is a perfect time to sit back and reflect on the impact he has had on their lives. For Joseph, it was simple.

“My father gave me the greatest gift anyone could give another person: he believed in me,” he said. 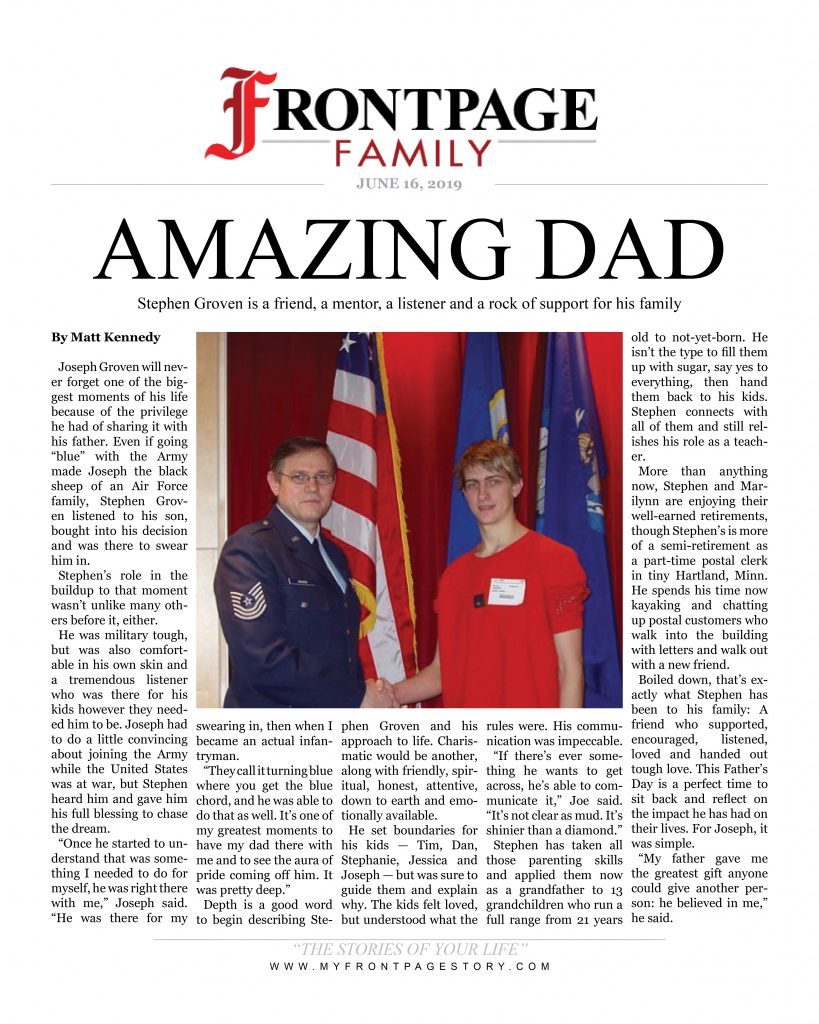