Dan. Freakin. Bailey.: Mike White made the fantasy football trade of the century when he met Heather, his future wife 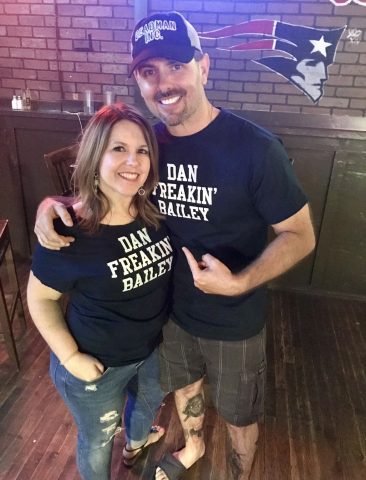 It’s unclear which is the more … unusual … aspect of Mike and Heather White’s relationship?

Is it how they met — him getting her number in a fantasy football trade for Cowboys kicker Dan Bailey?

Or is it their nicknames for each other — he is “Dragon” and she is “Taco?”

Regardless of which side of the fence you fall on, both are unusual. And that fits the couple just fine as they celebrate their third wedding anniversary this year.

“Heather is the one I would follow to the end of the Earth, the one who holds my love and life in her hands, and the one who I want to live, love and laugh with through this charming life,” Mike said recently.

Those who know these two best probably aren’t surprised by anything Heather and Mike have done together.

The relationship started from a joke. Mike threatened to draft Bailey, much to the chagrin of Heather’s aunt, who Mike had known for more than a decade. So they haggled.

“How about my niece’s number?”

The comedy of a stranger getting a text from Mike is what intrigued him the most.

“It’ll be really funny to get a text saying, ‘Hey, you don’t know me, but your aunt just traded you in fantasy football,” Mike said.

What he didn’t expect was for the trade to alter the course of his life.

Mike and Heather texted the rest of the day while watching the Connor McGregor-Floyd Mayweather fight. And he flew back home from Atlanta, where the draft was held, the next day. He expected that to be the end of it.

“The joke, in my opinion, had run its course,” Mike said.

But a funny thing happened after he landed at the airport — she texted him again.

So, they kept talking. And talking, and talking.

About the most random stuff, too. Like, how quickly do crows in Game of Thrones fly? They seem to get there in the blink of an eye, right? That doesn’t seem right. How quickly could a dragon deliver the mail?

The first time Mike flew up to visit her, Heather had a book, ‘Dragons Love Tacos,’ a stuffed animal and a care package waiting for him.

“When we were having our nightly conversations, we’d hang up and send each other a text,” he said. “I’d always send her, ‘Dragon loves Taco,’ and she always texted back, ‘Taco loves Dragon.’”

Six months later, they were married in Las Vegas. Four months after that, they moved in together.

Oh, yes. That’s another unusual nugget in the ‘Life and Times of Mike and Heather White.’

Even after cashing in on the best fantasy trade of his life and marrying Heather, the couple spent four more months living long-distance until she was able to transfer from her job in West Virginia down to Florida.

“Truthfully, it’s a perfect match,” Mike said. “She is my perfect match. She makes me laugh when I’m in a bad mood. She brings out what people call the ‘cackle laugh,’ people say the hyena in me. She knows me without saying a word.

“I’ve become a better person. I truly know what living for someone else means now. Kids aside, I live for her.” 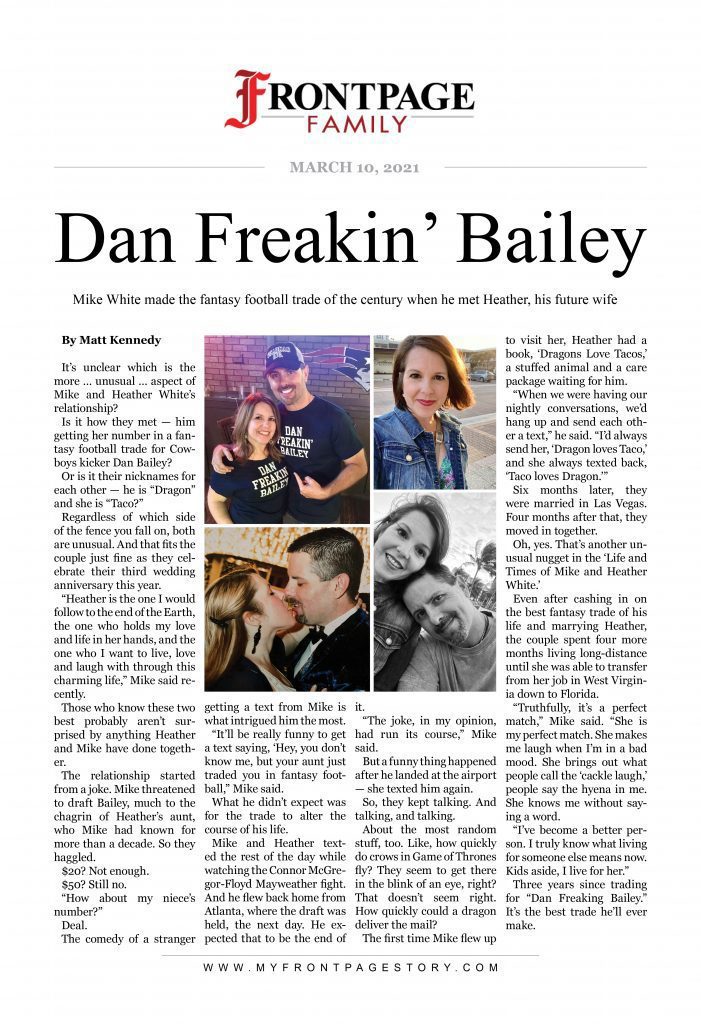