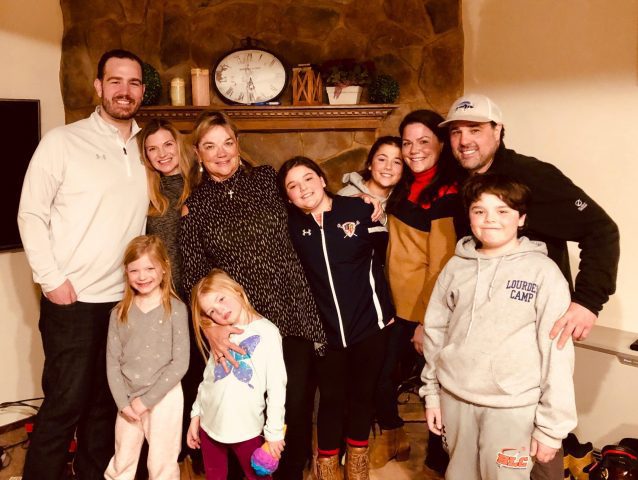 Sandee Tucker has always been the biggest fan that her kids, Ross and Bryn, have ever had. She has left no questions about how important they are to her or how far she would go to make sure they were happy.

Sandee projects love and positivity, and she might be the most outgoing person in the history of Wyomissing. But at the heart of all those good vibes is something much deeper and foundational to her children’s many successes in life.

That over-the-top enthusiasm has given Ross and Bryn a sense of belief that has made them who they are.

“I’m a pretty confident person, and I attribute most of that to my mom,” Ross said. “She was so supportive. She really made it a point to make sure my sister and I felt good about ourselves.

“I’m a big believer that confidence and work ethic are the most important aspects in life, and she instilled both, but especially the confidence. She was so overwhelming in terms of making me feel good about myself that it would have almost been impossible not to. She had constant words of affirmation.”

Sandee was a do-it-all mom who took her job seriously, and she was able to teach Ross and Bryn how to be confident, humble, caring and kind at the same time. That’s exactly what she demonstrated to them every day by combining an unreal level of support with kindness and a protective instinct.

“She was just a voracious mom to me,” Bryn said. “If anyone ever looked at me sideways, she would be calling moms and grandmothers. She’s an incredibly loyal person. She had just a fierce love and always a hug and a kiss and knowing she had my back.”

For Ross, the confidence he got from his mom was everything and helped him go from a non-starter early in his high school football career to a Princeton graduate and an undrafted NFL free agent who carved out a 7-year career. That confidence is also a defining quality in his career as a football analyst.

He owes both of those opportunities to Sandee and wants nothing more than to see his daughters Tess and Helen get to chase their dreams, too.

“She just really wants her kids to be happy,” Ross said. “And she knows that I’m really happy doing what I’m doing, but I know when I did my first NFL game on FOX and she was watching on TV, she got choked up. When I made the NFL, she got choked up.

“Just saying that, my eyes start filling up immediately. I can’t imagine what it’s like to see your child’s dream come true. If I could wish for anything right now, it would be for Tess and Helen’s dreams to come true. She got to see that, which has to be really, really cool.”

Sandee was probably born with the personality that influenced Ross and Bryn so much, but she also honed it through her childhood as an Army brat.

Sandee moved from state to state and lived in Germany twice, making her way from kindergarten through graduation at 10-plus schools. She is proud to this day that even after she bounced from school to school, she managed to leave high school with a little hardware.

“She was voted best looking in high school,” Bryn said with a laugh. “It’s like the best thing to ever happen to her.”

Sandee overcame those childhood challenges by being outgoing and learning how to make friends. Even now as she celebrates her 70th birthday, her heart still goes out to both family and strangers alike.

“I’m not kidding when I say there have been multiple times where people have gotten off elevators saying, ‘It was so great to meet you!’” Ross said. “She’s simply the most outgoing, friendliest, happiest person I know. There’s at least 10 people who would tell you that she is their best friend.”

Sandee’s friendliness and happiness didn’t come from living a charmed life. Rather, she brought the charm as she worked through obstacles and stayed positive along the way. She reaped what she sowed by finding love again with Dave Bosler and saving some of her best memories for life’s amazing “third act.”

“Her third act is pretty amazing,” Bryn said. “It’s one of the biggest blessings in our lives. We always say, ‘God bless Dave’ and thank God because I would worry about her. The fact she’s in such great place in her life is like the biggest gift ever.”

If anybody deserves that gift, it’s the woman who spent a lifetime sharing hers with others. Ross and Bryn know they wouldn’t be who they are today without that kind of influence and support, and they love the “Grammy” and “Grandma” she is to Ross’ daughters Tess and Helen and Bryn’s kids Caroline, Whitney and Tucker.

“She has just been such an incredible mom,” Ross said. “She’s been the biggest positive influence on my life, and I really can’t imagine life without her.”

“I feel lucky to always have been exposed to such love,” Bryn added. “Ross and I know we’ve been loved in our life, and even in our worst times we’re so confident because we know we had this lioness love us unconditionally. The sense of security you get from that, you take it into world and can deal with everything.”