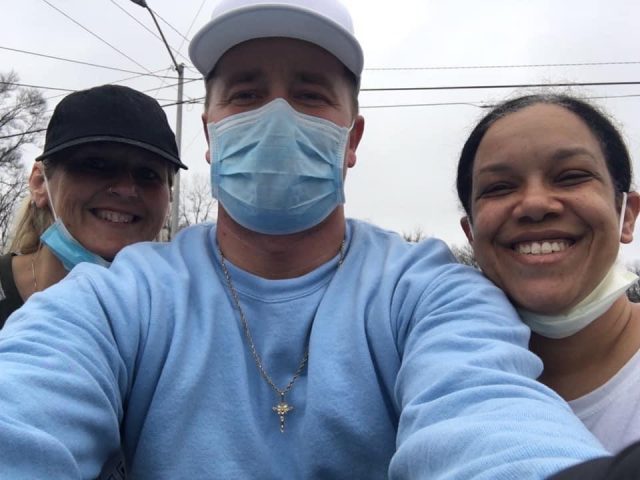 People in the Richmond community would recognize Shawn Wright’s face — and that blue sweatshirt of his — anywhere. Wright is a fixture in town and a man known to deliver during times of need, and the only thing he has ever wanted in return is a chance to do it again.

The front of his famous sweatshirt says, “For the love of Richmond,” which is a motto that drives him every day.

Wright has done it all, from odds and ends to deliveries and helping children in need through his Santa’s Secret Angels group. He is a “ninja” in the way he knows who has needs, then shows up to help and fades away to do it all over again, says friend Angela Robertson. She first met Shawn through a rummage she and her realty group organized to raise funds for him.

Even as the beneficiary of the fundraiser, Shawn was the first one there and the last one to leave, which Angela has come to know is the norm for him.

“You’ll never meet a more generous person,” she said. “He does all of this without wanting any acknowledgement. He’s always said that he’s been there before and needed help so now he can help others. That’s just the kind of guy he is, and he never stops smiling.”

A pandemic has put a growing number of people in position to lean on people like Shawn as they try to pull through sickness, loss of work and a major need for basic supplies. Shawn continues to answer that bell, whether it’s a toilet paper drop-off or collecting all the materials necessary to build masks for healthcare workers.

The Richmond community is following Shawn’s lead and rising to the occasion in a very big way.

A long, devastating fight against the coronavirus again revealed the depth of Shawn’s character in a brand new way. Months earlier, his home was gutted by a fire and the whole community jumped at the opportunity to feed a GoFundMe to help him cover some of those costs. As a new wave of devastation hit the town, Shawn swiftly gave every cent of that money back to the donors.

“He wrote a huge post about it and said, ‘With everything going on, my stuff is the least of my worries,’” Angela said. “‘Everybody that donated, you’re going to need your money.’ He returned everything to everyone who helped him. He didn’t keep any of it. He returned it all.”

It was yet another opportunity for Shawn to put his money where his mouth is, and yet another time where the generosity of his spirit shined through. He didn’t ask for the money in the first place, and he couldn’t fathom holding onto it with so many families hurting.

Call him a ninja or or just a good samaritan, Shawn will flash that trademark smile without letting the compliments sink in. He doesn’t do anything he does for recognition or credit, and he doesn’t want to be lifted up above anyone else. Instead, Shawn uplifts everyone around him and sets the kind of example that makes Richmond a better place.

“He’s just been someone that we all can look up to,” Angela said. “His devotion to our community is very outstanding. There’s not a lot of people who don’t know who he is. If they don’t know him personally, they have heard of him or seen him.

“He always has that ‘For the love of Richmond’ sweatshirt on. That’s what he represents. I think I speak for everyone with just a huge Thank You for everything he does. It’s really remarkable what he does.”