Love & Support: Cynthia walked into Sean’s life 11 years ago and changed everything with her love, compassion and unwavering support

Sean Carney once saw himself as a rock and roll “legend” who ran into hard times and believed he might have been on the road toward something even harder. He went out to blow off a little steam with a buddy after work 11 years ago, which is when Cynthia, quite literally, walked into his life and changed everything.

Within moments of that first conversation, they had nicknames for each other.

Carney, Sean Carney, was 007, and Cynthia was “Moneypenny.” Neither of them were there looking for love that night, but it just kind of found them anyway. Looking back, the whole night was like something out of a Hollywood script that was too storybook to believe.

“It was like a movie or something,” Sean said. “I was like, ‘No way, this ain’t Lifetime.”

The way their relationship has grown might suggest otherwise.

Sean played the role in this story of the down-and-out musician who had all but given up on love. Cynthia was the forward-thinking career woman who was unafraid that night of breaking free from traditional gender norms to get what she wants.

They were both there with friends, so they had a few drinks as a group, and Sean and Cynthia danced. They swapped phone numbers, and the rest quickly became history. For Sean, there’s a real feeling that they were both sent to each other at the exact right moment.

“I think she was sent to me and meant to save me,” Sean said. “I was heading in a bad place. Things started looking up. I honestly think if it wasn’t for her, it would have been death or jail. She instills self-confidence in me, like I’m valued again.”

Within the first year they were together, Cynthia opened her door to Sean when a bad loan collapsed and he was suddenly about to lose his home. That was a big moment for them, and it was one of countless instances where Sean knew he could lean on Cynthia.

Reliability is an ongoing theme in their relationship. Sean drives a dump truck by day, continues to work on his music by night, and has launched a voiceover business as a side project that keeps growing. Sean comes home mentally and physically exhausted and gets right to work again with total support from Cynthia, who is a successful accountant.

“She’s kind, caring and compassionate, a do-anything-for-you kind of person,” Sean said. “When I come home, she’s like, ‘All right, don’t worry about this or that. I’ll take care of it.’ She’s been ultra supportive in all my endeavors.”

Cynthia and Sean moved from California to Arizona to get a fresh start on life. They have their challenges like anybody else, but they also have each other’s back without question. They love to golf and go out on kayaks and their pontoon boat, and otherwise just focus on each other and the simple things in life.

Eleven years after they met in such profound and spontaneous fashion, they’re the same as they’ve always been. Cynthia continues to show with her actions that she is ready and willing to be there for Sean however he needs her to be. For that, he is grateful to have her in his life and excited for what the next 11-plus years hold for them.

“Thanks for always being there, and thanks for always supporting me,” Sean said. “It’s weird to be doing something like this because it’s an 11-year anniversary, not 10 or 20, but we’re weird like that. Here’s to 11 more.” 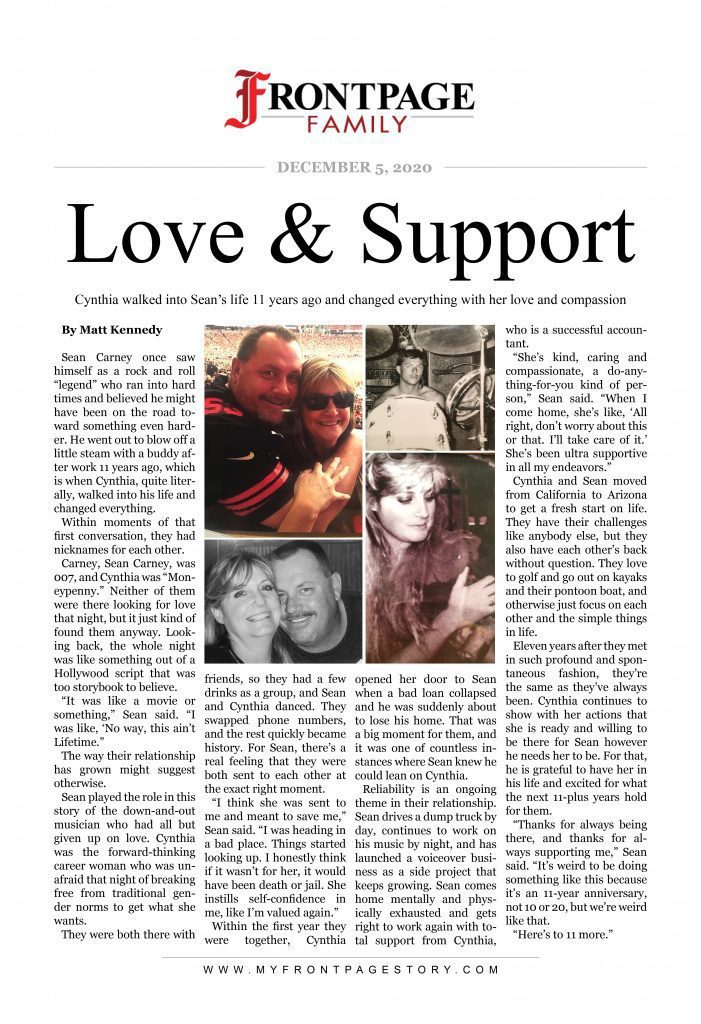