‘Love Yourself’: Charlotte Wallace has the talents and attitude to be the change she wants to see in the world

When Charlotte Wallace fell on hard times, she found a message that changed her life. “Love Yourself” from her favorite band, BTS, spoke positivity into her life when she needed it most.

Don’t even think about telling her it’s just a band or just a song when listening to it brought Charlotte closer to her family. It might have even helped her find the full depth of her own character.

Charlotte does love everybody. She also loves art, and she has a diverse set of interests and skills. She is empathetic, gossip-free and focused on finding the beauty in everything. Charlotte celebrates her 14th birthday with two parents, Chris and Kristin, who couldn’t be more proud of who she is and the wonderful things she stands for.

“We’re both very proud of the person she is,” dad Chris said. “That goes beyond the books, the art, the learning and all that stuff. It gets down to the nitty gritty with her. She tries to see the beauty in things. She’s a kind person. She’s supportive of people. She’ll look at differences in people and see the beauty in it and not the negative it can be.

“She does not jump in with the crowd when someone is being hurt or things like that. I’m really proud of her and the fact she’s an honor student and all that, but the person behind that is who I’m most proud of.”

Music has brought the Wallace family even closer together through sharing and watching BTS videos. They have created an environment where openness and sharing are made easy, but they’ve also worked to take an active role in Charlotte’s interests.

Through all that, Kristin got one of her favorite moments as a parent when she and Charlotte went to a BTS concert at the Prudential Center in Newark, N.J.

“Oh my god, it was awesome,” Kristin said. “It was great. It was really cool to know that I was part of my daughter’s first experience at a concert and she really started to share a lot of their music with us, where at night after dinner, she’d come down and say, ‘Oh, I have to show you this new video they have out.’ The three of us watch together at night.

“She primed me for the concert. I downloaded albums on my phone, so that by time we got to the concert, I knew a lot of the songs. It’s really important to Charlotte, so I wanted to make sure to be able to engage in that as well. It’s something very special to both us.”

Likewise, Chris and Charlotte got a chance to share an experience at a Philadelphia Eagles game that was just as special to both of them. The trip wasn’t about the football as much as it was a father-daughter bonding moment that both will remember forever.

“Right before Christmas, she always brings that up,” Chris said. “Whenever it comes up, she smiles. It was just really one of our best bonding moments. I could see how happy it made her. I was happy. iI could go really bad or really good, but thank God it was really fun for both of us. We both kind of cherished that moment.”

Charlotte and her family likely have plenty of those shining moments ahead, and Charlotte’s future is bright regardless of which interests she chooses to pursue. In addition to art and music, she loves writing and has a sharp sense of humor that can make her parents and best friend Larissa howl.

There’s still plenty of time to figure out her path in life, of course, but Charlotte already has a head start. Good genes might be on her side, too. She is a descendent of Scottish national hero Sir William Wallace, a man who changed his country and fought for freedom for his people.

Charlotte might not show up in war paint anytime soon, but she has a chance to affect her own type of change with her mind, her attitude and her talents as an artist. 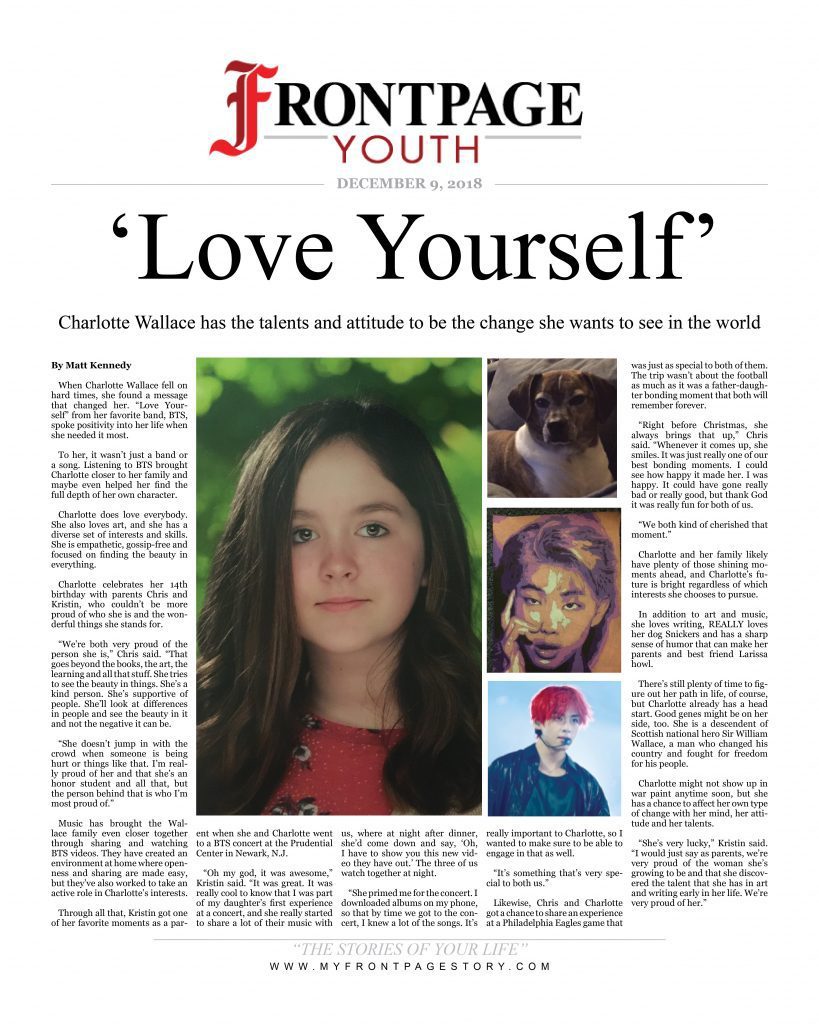