More Cowbell!: Terence Stalder is a Dad of four who has no shortage of Dad sayings 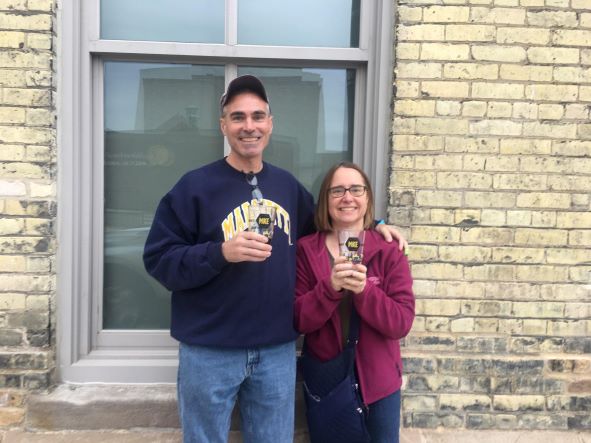 Terry Stalder is a born and bred Clevelander, and that loyalty pours into his wife and kids.

From spending time with his brother and three sisters, to his wife and four kids, to his four grandchildren, Terry is a family man who loves the family he has been gifted.

“My dad is the dad of our family,” his oldest daughter, Sarah, said. “My dad has always had very high expectations for my siblings and me. He thought we should all be engineers (or priests or nuns), and though he was disappointed up until the last one, he was always proud of us no matter what paths we ended up taking.”

Terry has always taught his children the importance of independence, and though his two daughters may have taken their independence a little further than expected, he still loves them for who they are. But that’s certainly not the only thing Terry has taught his family over the years.

“I learned to not take life too seriously,” his oldest child Bradley said. “I get my tendency to use puns and jokes from going back & forth with him. He would have funny nicknames for my siblings – Sarah-Bear-a; Emma-Doodles; Caleb-binski.”

When you think of dad jokes and puns, Terry could be considered the master of them. One of the things his kids really remember him for are his certain saying that he uses, such as:

“Don’t put all your eggs in the same meat grinder.”

“I went to high school with Abraham Lincoln.”

“We love the babies.”

“Don’t spit at the llamas!”

“We run for popsicles.”

“Everything is a scam.”

“There’s no cryin’ in baseball.”

“You scratched my anchor.”

“I forgot my wallet.”

But his sayings are not the only things that stand out to his kids. He is a family man who is very loving of his wife, and he shows a constant love for her every day.

“I admire how my dad loves my mom,” Bradley said. “He has supported her during the time she stayed home to watch me and my siblings growing up and also supported her in going back into the workforce. He respects her opinions, intelligence, and her hobbies.”

Terry and his wife have been married for 32 years, and he has not let her opinions get in the way of love, even if it means she is watching her Green Bay Packers on Sunday afternoons.

“My dad is a strong believer in the importance of a family unit,” Sarah said. “He chooses my mom every day. I can never recall a time where he has said anything other than praise for her. He loves, values, and respects her with his whole being.”

He shows loyalty to his wife and his family every day, and that is something that has always stood out to his kids. Bradley even mentioned how his parents are a model for what his wife, Elizabeth, and he want to show their children.

“My dad means the world to me and my family,” his younger daughter Emma said. “He is a role model on how to love and be loved. Without him, I wouldn’t be as good as I am at rolling my eyes at every single joke that comes out of his mouth or getting triggered by Bruce Springsteen’s Greatest Hits that I need to clean the house.”

“I’ve learned how to drive,” Bradley said. “Dad works for Ford Motor Company and would test drive an E-150 van every week for a vehicle evaluation. He taught me to mind the dimensions of especially large vehicles – two of the first cars I drove were vans.”

Terry has been a mechanical engineer at Ford Motor Company for over 20 years, so there has never been a shortage of Fords in the Stalder driveway. Sarah said he would convince management to let him test drive vans for long trips for “quality purposes,” when in reality it was to teach his kids how to drive big vehicles and not put miles on their family vehicles when they went on vacations.

Beyond that, Terry is a man of faith with no shortage of positivity.

“Faith saved my dad’s life,” Sarah said. “When my grandfather passed away my dad was just 16. My grandfather’s passing left my dad, and much of his family, with quite a bit of trauma and my dad’s faith is what has helped him to find hope again.”

“When it comes to my dad, the first thing I think of is his enthusiasm and energy,” Emma said. “He gives his all in whatever he involves himself in and leaves nothing on the table. Whether that be running, coaching, fathering, his faith, or making the best mashed potatoes known to man – he puts his whole heart into it.”

Bradley mentioned Terry’s four main qualities as being family-centered, thoughtful, humble and patient, and he appreciates his father for all of these qualities that he exudes and shows on a daily basis.

One other thing that sticks out to Terry’s children is his passion for running. It’s inspiring to see him and his brother, Craig, run both the 100th and 125th Boston Marathon together.

“I think my dad enjoys running because it allows him time to decompress from life,” Emma said. “That could be by himself trying to breathe and reflect or with friends that he can talk through life’s ups and downs.”

Everyone needs time to themselves, including strong family men like Terry, and his kids are appreciative of that. That time to self-reflect helps to strengthen his faith and makes time spent with family even more special.

His kids are glad to celebrate another birthday with their favorite dad.

“Dad, thank you for giving up so much for us over the years,” Sarah said. “As a parent myself now, I appreciate everything you did for us so much more now than I could ever comprehend before. I am so thankful that I have had so much time with you, and I am so lucky that I get to share Jack with you. You made it, dad. Cheers to 56 years (and many more)!”

Oh, and Caleb wants his dad to know that he’s renewing his contract for another year… 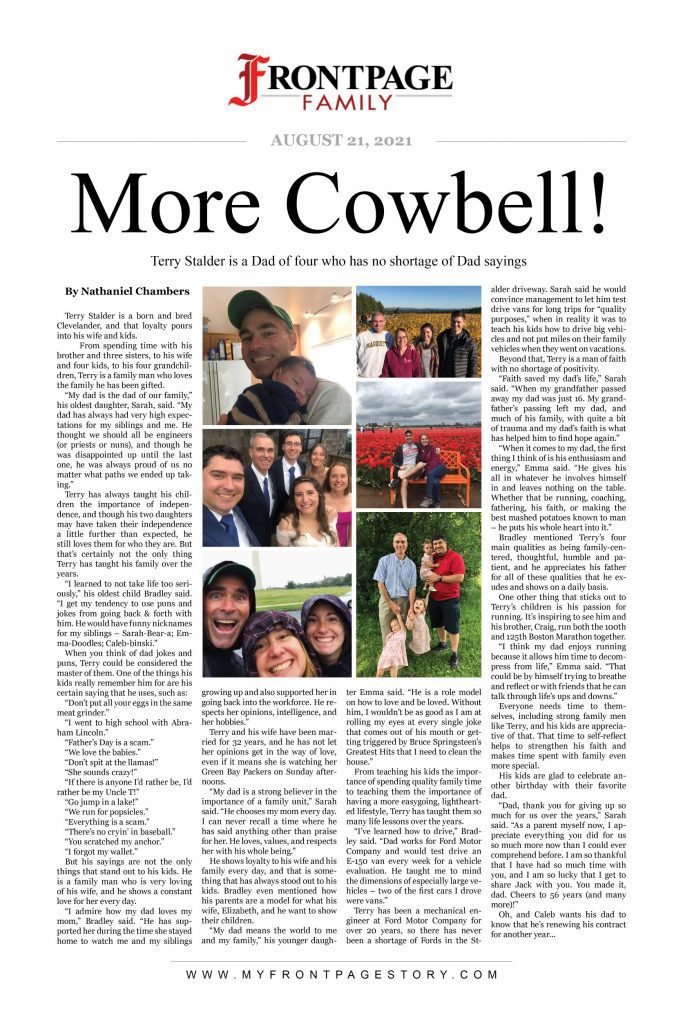