‘My Lobster’: Mel Shaiboon can’t wait for the future with Chrissy, his quirky, supportive and loyal fiancee

Mel Shaiboon has learned a thing or two about the definition of sacrifice from his fiancée, Chrissy Tate. That applies to their relationship and the loyalty she has for family and friends, but also had the courage she showed, as a lifelong Pittsburgh Steelers fan, to march on the Baltimore Ravens’ drumline.

That’s not an easy commitment for anyone who bleeds black and yellow to make, but Chrissy did it. That probably says everything about Chrissy, but Mel could go on and on about everything he loves about her. She is dedicated and loyal, intelligent and relaxed, and beautiful in every sense of the word.

Mel knows he’s a lucky man to be loved by someone who has so much to offer. He has never known someone to have so many surprising interests and talents all rolled into a selfless and hard-working package. She’s full of surprises, and each one is better than the last.

“Chrissy is truly unique,” Mel said. “She is my best friend, and I look forward to spending the rest of my days with her. She is my lobster!”

Mel has two kids, Kaid (11) and CC (7), and Chrissy has an 8-year-old Delia, so there’s no shortage of craziness happening around the house. Mel loves that Chrissy is there for all of it and that she insists on raising the kids with the right values and habits to be successful in life.

Just like her career or anything else worthwhile to her, Chrissy takes no shortcuts as a mother.

“Chrissy is a good mom because she is not lazy,” Mel said. “She is focused on the details. Chrissy teaches our kids the importance of eating healthy. She encourages lessons to develop their minds and growth for life, but she is also extremely caring and involved with their lives.”

Nikki Evers knew early in her friendship with Chrissy that she had met her quirky match. She says they are both “amazingly odd” and similar in lots of ways, which makes the time together an uproar for both of them.

But what Nikki says sets Chrissy apart is her depth and support in their relationship. She’s not just a good-time friend who disappears when things get hard, but a dependable listener who rises to every challenge that Nikki might face, and vice versa.

“I’m thankful daily for Chrissy’s friendship,” Nikki said. “It’s hard to speak of a time within the past year that she hasn’t been there for me or helped me through quite literally some of the most exciting and challenging times of my life. I never have to worry about judgement or scrutiny when it comes to our friendship. I always know that I will be heard and loved no matter what.”

That sentiment perfectly encapsulates the role Chrissy plays with Mel and the kids, too.

She is faithfully by their side no matter what is happening, even if her default position is to be goofy and fun. The daily grind of life doesn’t have to be serious, but Chrissy is always ready to lend a hand and be there for everyone in both the highs and the lows.

“To say that our friendship has been life-changing for me is putting it mildly,” Nikki said. “I appreciate her listening to me and loving me the way only a real friend could.”

Mel was pretty much smitten by the whole package of kindness and fun from the very start.

And for her part, Chrissy laughs that she had some kind of mystery attraction that, even if Mel couldn’t understand it, he wasn’t about to argue, either.

Mel couldn’t have imagined from that first meeting at AT&T until now that he would have gotten exactly what he wanted. He feels incredibly fortunate to have a lifetime of tomorrows where he never stops wanting more.

It’s an insatiable feeling that can only be appreciated by someone who has been through it before. Like, for example, a vampire in the presence of an open wound.

“She needs to know how simply amazing she is,” Mel said. “I do know that I look forward to spending the rest of my days with her. Chrissy is my better half, tag team partner, partner in crime and adventure, best friend, and lover.

“Chrissy makes me want to be a better man. I cannot put into words how in love I am with her.” 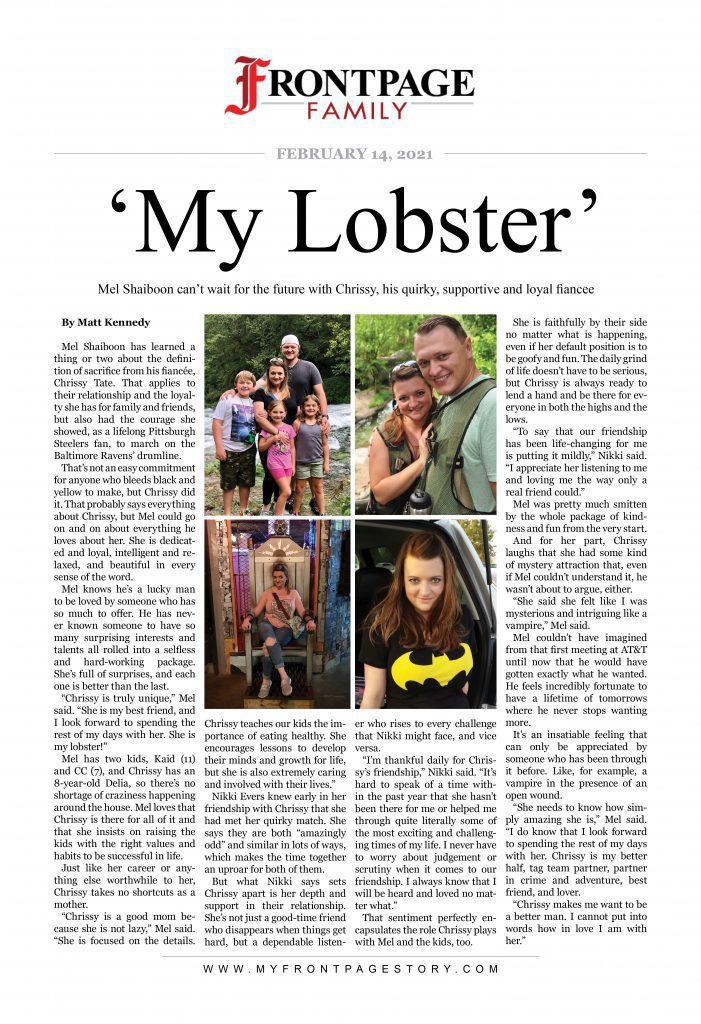