‘Our Rock’: Robbi Logan is a loving wife, supportive mother and the glue that keeps her family together 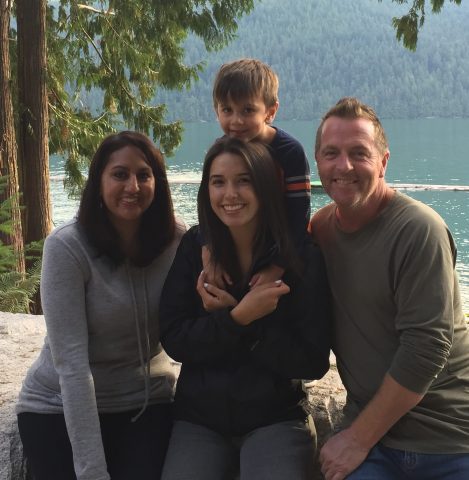 Craig and Robbi Logan came from polar opposite backgrounds, which made the love they found in each other just as unlikely as it was beautiful. Their relationship was also something they kept a secret for two years before they made it known to their families, at which point, the collective response was, “What took you so long?”

Craig and Robbi found love and support, which helped them get to where they are today in their 11th year of marriage. Robbi’s parents immigrated from India and Craig was just out of a previous marriage, but they were committed from the start to loving each other and nothing else.

Robbi has made that easy for Craig by being supportive, loving, positive and fun at every stage of their relationship. That also goes for their 7-year-old son Cameron and for Craig’s 22-year-old daughter Faviana, who counts Robbi as not just a stepmother but a friend and a trusted confidant who is always there to listen.

“She’s just so positive,” Craig said. “She really is rarely in a bad mood. She makes everybody feel better because she’s always so upbeat and loving, and she’s just a fabulous mom and wife. She puts the family ahead of herself in so many ways. It’s truly special. She’s got a great sense of humor, and she’s beautiful.”

From Craig’s perspective, what’s not to love? All those good things were apparent on their first date, which Craig booked for a hockey game to make sure they had something to watch if the conversation fizzled out. Turns out, they connected in a way where hockey was just background noise for the main event.

“We connected so well, and we just talked the whole game,” Craig said. “We can’t even remember who won.”

Robbi and Craig weren’t completely homefree at that point, but they had a feeling that something special was happening. Craig still had to reveal his odd side job as a driver for an escort service, and he had to twice explain away mystery facial injuries he suffered. He had to do some convincing that he was, in fact, struck twice in the face by a car door.

Robbi stuck around and stayed by Craig’s side through dating, marriage on August 1, 2010, and the arrival of Cameron. Not every day has been easy along the way, including three years of trying for a baby before that dream finally materialized, but they’ve worked through their challenges as a team.

As a mother, Robbi insisted on going through all the hard work — the needles, the appointments, the blood work — to have Cameron, and she has treated her boy like the gift he is every single day since.

Robbi has also been patient and understanding in every other facet of their marriage. Craig feels whole again after struggling in the months leading up to meeting Robbi, and he feels grateful for the chance to meet her and for the fact that she has changed his life.

Robbi’s love and support mean everything to him, to Cameron, and to Fabiana. Whatever she’s doing, whether as a mother or wife or friend, Robbi just has a way of making everything — and everyone — around her better.

“When I met Robbi, I was a broken man, but she just believed in me,” Craig said. “And because she believed in me, she just gave me the confidence to start achieving all the goals I wanted to achieve. She is my rock and my foundation. I look at her as my hero, and she picked me up, dusted me off and showed me what it would take to be the man I am today.”