‘All about family’: Ralph Snyder will be remembered for pride he had in being a husband and father 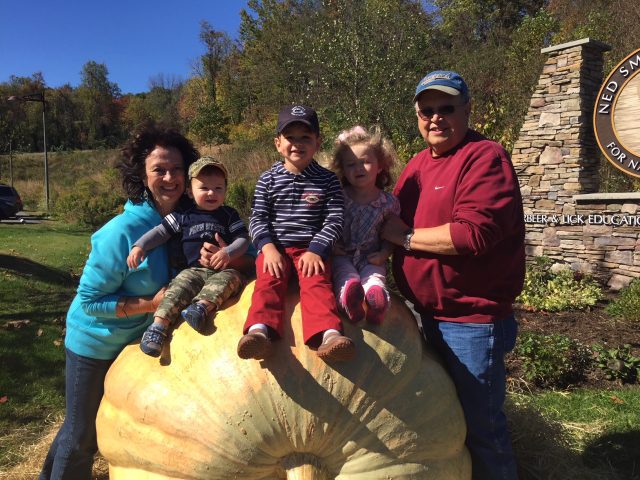 Ralph Snyder left behind perhaps the single most important legacy a father could ever hope for: He ALWAYS showed up for his kids.

Snyder didn’t talk much about his fatherly exploits. He was the opposite of boastful, but he never missed a sporting event and he often coached his kids in a variety of sports. He showed up for dance recitals too, even if they made him the slightest bit uncomfortable.

“He was all about family,” his wife Vicki said. “That was the most important thing to him. He was a very, very dedicated father, absolutely dedicated. He was involved with all the activities, which were numerous, that they were involved in.

“He never as I recall missed a sporting event they were in. He was a baseball coach. He labored through many a dance recital. He was very, very proud of Amber, she’s our oldest, but it wasn’t his forte always to go.”

With that ironclad dedication to his children, Snyder set an example that can make his family better for generations to come. His children Amber, Brock and Colby now prioritize the same things with the family’s four grandchildren, and their children will probably pass it on to their kids, and so on and so on.

Put simply, Ralph Snyder made the world a better place, and he did it all with a smile.

“I told him, ‘They want be like you,’” Vicki said. “Brock has often said that. His dad was there for him, and now he’s such a good dad.”

The Snyders’ young grandchildren were only starting to see Ralph’s attentiveness when he passed away. Halle, 4, and Jack, 6, got soccer lessons. Sebastian, who turns 4 in March, has memories of him, and baby Sawyer, who turns 1 in March, will be told all about him.

Ralph had the same passion — perhaps even more — for his grandchildren as he did his own children.

“They were his everything. Everything. It really hurts because he was looking forward to the kids playing sports, not going to dance recitals,” Vicki said with a laugh. “Our only granddaughter is doing dance, and he said, ‘Oh no, do I have to do dance recitals again? I’ll do it for her.’ I can’t tell you how much he loves these kids and how much they love him.”

Brock remembers the small-town humility with which his dad lived his life. From tiny Rough And Ready, Pa., Ralph was college educated and had a lengthy career at AMP Incorporated before he ventured out on his own as a financial advisor. 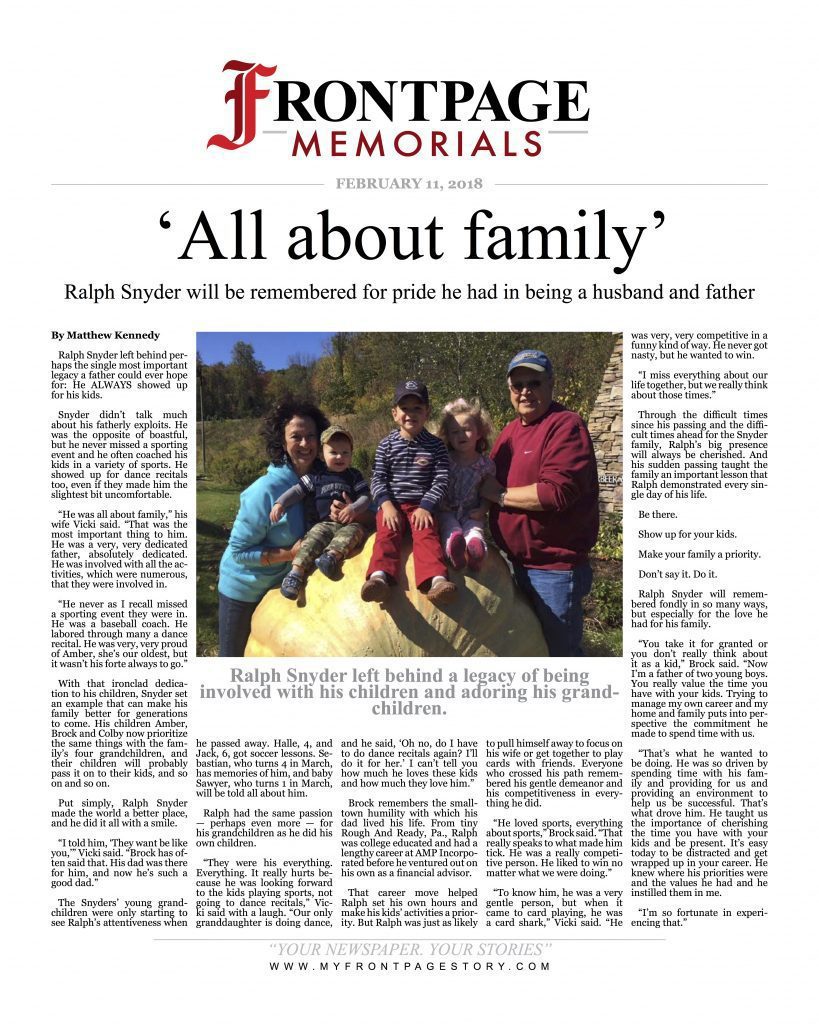 That career move helped Ralph set his own hours and make his kids’ activities a priority. But Ralph was just as likely to pull himself away to focus on his wife or get together to play cards with friends. Everyone who crossed his path remembered his gentle demeanor and his competitiveness in everything he did.

“He loved sports, everything about sports,” Brock said. “That really speaks to what made him tick. He was a really competitive person. He liked to win no matter what we were doing.”

“To know him, he was a very gentle person, but when it came to card playing, he was a card shark,” Vicki said. “He was very, very competitive in a funny kind of way. He never got nasty, but he wanted to win.

“I miss everything about our life together, but we really think about those times.”

Through the difficult times since his passing and the difficult times ahead for the Snyder family, Ralph’s big presence will always be cherished. And his sudden passing taught the family an important lesson that Ralph demonstrated every single day of his life.

Show up for your kids.

Make your family a priority.

Ralph Snyder will be remembered fondly in so many ways, but especially for the love he had for his family.

“You take it for granted or you don’t really think about it as a kid,” Brock said. “Now I’m a father of two young boys. You really value the time you have with your kids. Trying to manage my own career and my home and family puts into perspective the commitment he made to spend time with us.

“That’s what he wanted to be doing. He was so driven by spending time with his family and providing for us and providing an environment to help us be successful. That’s what drove him. He taught us the importance of cherishing the time you have with your kids and be present. It’s easy today to be distracted and get wrapped up in your career. He knew where his priorities were and the values he had and he instilled them in me.

“I’m so fortunate in experiencing that.”

MyFrontPageStory.com specializes in telling stories about major life events. If you have an anniversary, birthday, graduation, birth or any other life event, we have writers who can bring your cherished memories to life. Click here to learn more.