‘She’s a fighter’: Erin Sherry perseveres through cancer and loss to lead a business and family 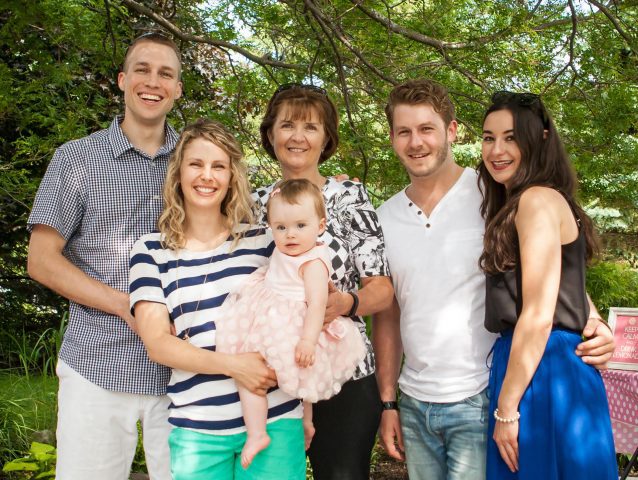 In her darkest hour, Erin Sherry made a conscious decision to fight like hell. Two decades ago, doctors gave her a terminal diagnosis that changed her life. It was also perhaps the last time anyone underestimated her will to survive.

Erin took everything cancer threw at her and prevailed because that’s who she is. She fought for herself, for her kids and for her family, and she did it with the same determination she applies to every part of her life. She’s never been one to back down from a challenge.

“They didn’t give her a very good prognosis,” daughter Megan said. “She’s 39, got two young kids, and doctors are telling her the outlook was not great. Mom said to the doctor, ’Is there a person on this planet who has beaten this particular type of cancer?’ The doctor said yes. She said, ‘That’s all I need to know.’”

Erin’s extraordinary stubbornness, how her family so lovingly describes it, is part of a persona that allows her to make calculated business decisions one minute and cuddle her “grandbabies” the next. She is a CFO for a company she co-founded, a mother and a grandmother who balances her worlds masterfully.

Erin is a trusted advisor whose opinions are valued by all, but she saves the fuzzy feelings for “her people,” Megan said. And the more adversity she faced in her life, the warmer and fuzzier she got.

“It’s almost like Jekyll and Hyde in a work capacity versus family,” Megan said. “At work, she’s extremely professional and disciplined. She’s a warm, fuzzy person with us. Outside of work with her people, she’s able to show a softer side and be open with those she loves.”

Megan and her brother Craig were 12 and 10 years old, respectively, when Erin was diagnosed with non-Hodgkin’s Lymphoma. The disease was uncommon at the time and the diagnosis was frightening.

Erin was faced with her own mortality and the livelihood of a business she and her late husband Dave built from the ground floor. But through stress and fear came fresh eyes that endured through her recovery.

“We became very good friends from that point on,” Megan said. “Although it was a stressful time with her cancer diagnosis, the business and everything going on I often view her cancer diagnosis as a blessing in a way because our relationship changed and it brought us closer.” 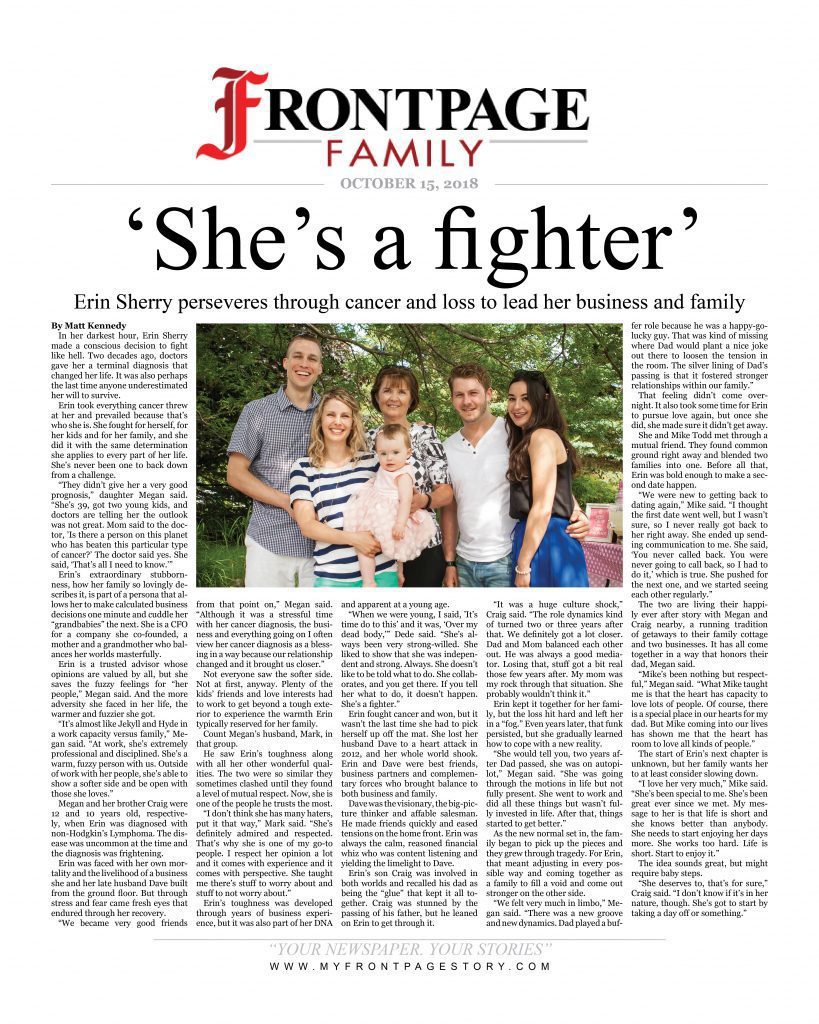 Not everyone saw the softer side. Not at first, anyway. Plenty of the kids’ friends and love interests had to work to get beyond a tough exterior to experience the warmth Erin typically reserved for her family.

He saw Erin’s toughness along with all her other wonderful qualities. The two were so similar they sometimes clashed until they found a level of mutual respect. Now, she is one of the people he trusts the most.

“I don’t think she has many haters, put it that way,” Mark said. “She’s definitely admired and respected. That’s why she is one of my go-to people. I respect her opinion a lot and it comes with experience and it comes with perspective. She taught me there’s stuff to worry about and stuff to not worry about.”

Erin’s toughness was developed through years of business experience, but it was also part of her DNA and apparent at a young age.

“When we were young, I said, ’It’s time do to this’ and it was, ‘Over my dead body,’” Dede said. “She’s always been very strong-willed. She liked to show that she was independent and strong. Always. She doesn’t like to be told what to do. She collaborates, and you get there. If you tell her what to do, it doesn’t happen. She’s a fighter.”

Erin fought cancer and won, but it wasn’t the last time she had to pick herself up off the mat. She lost her husband Dave to a heart attack in 2012, and her whole world shook. Erin and Dave were best friends, business partners and complementary forces who brought balance to both business and family.

Dave was the visionary, the big-picture thinker and affable salesman. He made friends quickly and eased tensions on the home front. Erin was always the calm, reasoned financial whiz who was content listening and yielding the limelight to Dave.

Erin’s son Craig was involved in both worlds and recalled his dad as being the “glue” that kept it all together. Craig was stunned by the passing of his father, but he leaned on Erin to get through it.

“It was a huge culture shock,” Craig said. “The role dynamics kind of turned two or three years after that. We definitely got a lot closer. Dad and Mom balanced each other out. He was always a good mediator. Losing that, stuff got a bit real those few years after. My mom was my rock through that situation. She probably wouldn’t think it.”

Erin kept it together for her family, but the loss hit hard and left her in a “fog.” Even years later, that funk persisted, but she gradually learned how to cope with a new reality.

“She would tell you, two years after Dad passed, she was on autopilot,” Megan said. “She was going through the motions in life but not fully present. She went to work and did all these things but wasn’t fully invested in life. After that, things started to get better.”

As the new normal set in, the family began to pick up the pieces and they grew through tragedy. For Erin, that meant adjusting in every possible way and coming together as a family to fill a void and come out stronger on the other side.

“We felt very much in limbo,” Megan said. “There was a new groove and new dynamics. Dad played a buffer role because he was a happy-go-lucky guy. That was kind of missing where Dad would plant a nice joke out there to loosen the tension in the room. The silver lining of Dad’s passing is that it fostered stronger relationships within our family.”

That feeling didn’t come overnight. It also took some time for Erin to pursue love again, but once she did, she made sure it didn’t get away.

She and Mike Todd met through a mutual friend. They found common ground right away and blended two families into one. Before all that, Erin was bold enough to make a second date happen.

“We were new to getting back to dating again,” Mike said. “I thought the first date went well, but I wasn’t sure, so I never really got back to her right away. She ended up sending communication to me. She said, ‘You never called back. You were never going to call back, so I had to do it,’ which is true. She pushed for the next one, and we started seeing each other regularly.”

The two are living their happily ever after story with Megan and Craig nearby, a running tradition of getaways to their family cottage and two businesses. It has all come together in a way that honors their dad, Megan said.

The start of Erin’s next chapter is unknown, but her family wants her to at least consider slowing down.

“I love her very much,” Mike said. “She’s been special to me. She’s been great ever since we met. My message to her is that life is short and she knows better than anybody. She needs to start enjoying her days more. She works too hard. Life is short. Start to enjoy it.”

The idea sounds great, but might require baby steps.

“She deserves to, that’s for sure,” Craig said. “I don’t know if it’s in her nature, though. She’s got to start by taking a day off or something.”