For 50 years, David and Robyn Alspach have been partners who never believed in putting each other in tidy, traditional boxes.

They have both maintained successful careers — David as an attorney and Robyn in  information technology — while also taking their turns handling the nitty-gritty of raising their kids, Anne and Clay. Their 50 years of marriage are marked by love, trust, respect and a mutual love for adventure. They also aren’t afraid of giving each other the occasional tough love.

“I think they’ve learned to live with one another and just know how they are,” Anne said. “For example, my dad loves to tell a story. He will get on a roll and then my mom will say, ‘Talk faster, Dave.’ She never calls him Dave except for that. She calls him David and is busting on him when she says it, but it’s all in good fun.”

David is an accomplished attorney who has made a difference in the lives of countless children in abusive situations. Still, Robyn likes to needle him about the skills that were so valuable in the courtroom not being necessary at home.

David launches into one of those detailed stories when he talks about the first time he met Robyn. It was a blind date at the request of his fraternity brother that pulled him back to Cornell the fall after he graduated. His buddy needed a wingman, so he showed up as a favor without a real thought that he might be taking a step toward changing his life forever.

“I got a call and this guy said that he had gotten a date with a girl from Wells College, but she would not come to Ithaca alone,” David said. “She had to have these other two girls with her. They asked if I would come up there and be the date for one of these girls. I figured what the heck. I went up there and Robyn was one of the three girls, and that was that.”

David would come to get used to making that drive in his 1965 Mustang.

He drove back to see Robyn, who was still an undergrad at Wells College, for the frat’s next big event a few weeks later. He asked Robyn to come to Ithaca for it, and just like that, they were on the road toward 50 years together.

David recalls how “proper” Robyn was when they first met, and they both paint a picture of a relationship that felt seamless from the start. They spent most of their time together in upstate New York as David eagerly made the long drives back and forth from Lancaster, Pa.

With Robyn waiting for him on the other side, the drives usually felt like a breeze. They later relocated to Philadelphia for David to go to law school and were married Sept. 12, 1970.

That same easy tone was set early in their relationship, and it was a common thread in the 50 years that have since come to pass. The sacrifices they made together were always easier because they knew they could trust each other and that they were both invested.

“We both had careers and respected each other’s careers, so that it gave us each some independence,” Robyn said. “We weren’t in each other’s pockets. I did some traveling in the beginning, and David was the home person when the kids were younger and I traveled a week or two a month. I had that flexibility to do that. He had his legal career here in Lancaster and he could do that at the same time.”

David had his legal career and didn’t think twice about giving Robyn the runway she needed to build the career she wanted. He also took an introductory class on computers just to better connect with what she was doing.

On the opposite side, Robyn has always gone with the flow on road trips and vacations, which almost always take them on detours to the nearest historical sites. It was all part of the air of cooperation that filled their 50 years together with genuine happiness and fun.

“They’re quite supportive of each other,” Anne said. “They support each other’s interests. My mom has probably gone to more World War II sites than she would care to, but she knows that’s my dad’s thing.”

Of all the trips and all the sites together, one particular adventure rises to the top of David’s list. He loves history and values the opportunities to see places like Waterloo and Normandy where major world events happened, but none of it measures up to the most special experience he has shared with the whole family.

“The neatest summer was when we saw all the Halls of Fame with the kids,” he said. “We basically hit them all. It was fun and it started off just because Robyn had a business meeting and we were going to be going through the area where the football Hall of Fame was, so we stopped there.”

David and Robyn both ensured that they made memories with each other, but even more so with the kids. The hustle of life didn’t always make that kind of commitment to quality time easy, but they worked together to get them to their sports and activities. They were active participants, too, from scouts to soccer and everything between.

“Mom and Dad were always involved in our activities,” Clay said. “They drove us everywhere, coached soccer, served as leaders in cub scouts and boy scouts, among other things. It wasn’t until I got older that I realized how special it was to have them so involved. They have extended their love and support of me and Anne to our spouses and kids. That love and support means the world to my wife and kids, and I’m sure Anne would say the same”

David and Robyn have always been good at sharing the gift of their attention and a sincere effort, which is a common thread through their 50 years together. David and Robyn still embrace the notion that neither of them is perfect, but they don’t expect each other to be.

So, they work at it. They put in the effort. They compromise, and they show up for each other and 100 percent of the time. Their 50 years of marriage are a product of that unwavering commitment, which is worthy of a celebration from the people who love them the most.

To so many of them, David and Robyn are a working example of what marriage should be: perfectly imperfect.

“As they’ve gotten older, they’ve needed to be patient or I felt like they would have killed each other a long time ago,” Anne said. “They care about each other. There’s bickering or whatever, but it’s clear they adore each other. They’re supportive of one another. The fact they’ve been together so long is kind of amazing.” 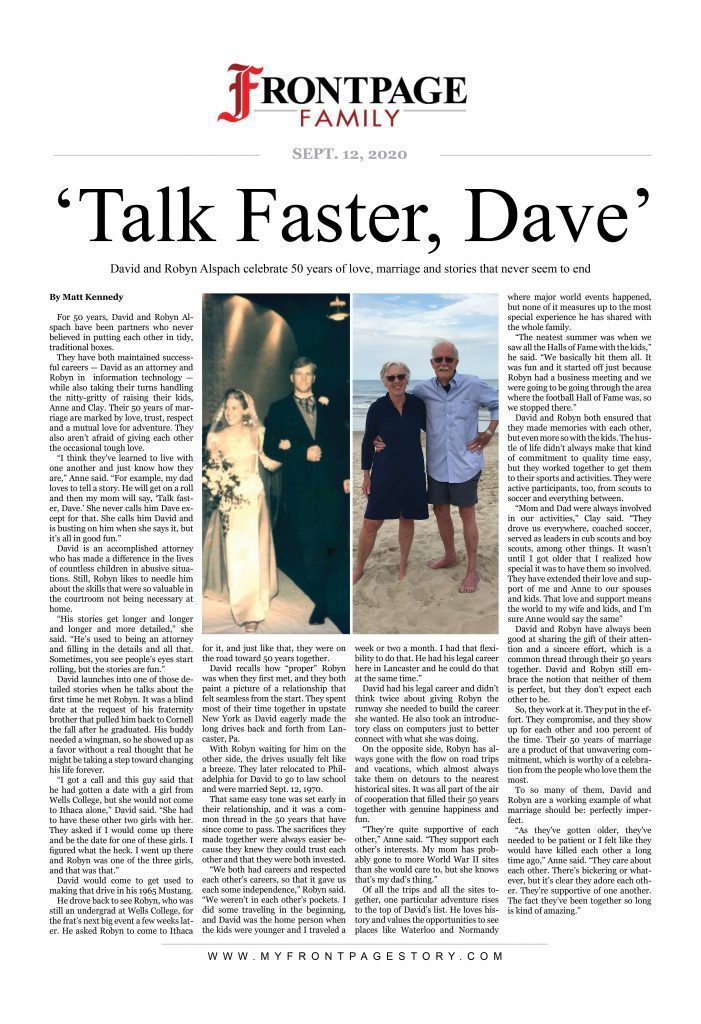