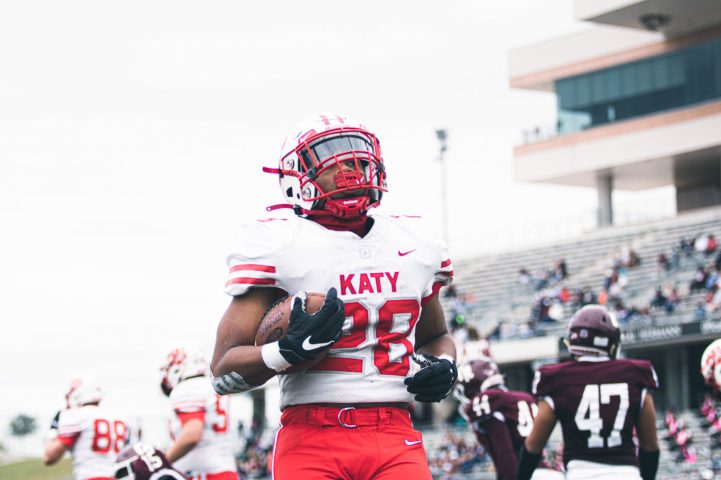 Arkansas State is a small FBS school with big goals and a bright outlook with the arrival of first-year coach Butch Jones. Katy High School running back Jalen Davis connected with the Red Wolves’ ambitions and their desire to punch above their weight, so he jumped at the chance to link up with Jones and slay some giants together.

Davis is a Texas all-state running back and a big-time player who is still very much on the upswing in his football career. He has always been comfortable with the ball in his hands, where he can take the game to defenders, but Davis has also prioritized winning over his own personal preferences.

He was happy to move to the defensive side of the ball for his freshman and sophomore seasons when his team needed reinforcements.

“Coach thought I was good at DB, and I just played wherever the team needed me,” Davis said. “I just feel more comfortable in the backfield. The decision is in my hands instead of reading off people. I still have to read, but I can make them react.”

Davis is a full-go in the backfield now and on the cusp of making the drive to Jonesboro to take the pursuit of his dreams to the next level. He’ll classify as a redshirt freshman when he gets there.

Where he was once committed to play at Stephen F. Austin, Davis bought into the vision that Jones and his staff shared for the program. He also saw incredible passion for the game of football all through the university community. There’s a clear expectation to win big games and an even clearer sense of support from the school and fans.

Davis was thrilled to find a school and a program that thinks as big as he does.

“Everybody is really supportive of the team and all the players have got their heads on straight and they’re not doing anything too wild,” Davis said. “I just liked the community there.”

Davis is listed at 5-foot-10 and 190 pounds and has all-state credentials in Texas, where he helped lead Katy to a Class 6A Division II state title and ran for 1,518 yards with 25 touchdowns in 13 games.

Katy coach Gary Joseph has praised Davis’ talent and his work habits while also leaning on his versatility and his eagerness to win. Davis spent time at safety and even got some run at linebacker before returning to his home in the backfield.

The results since then speak for themselves, but Davis also believes he’s still just scratching the surface of his abilities. Since the end of his senior season, Davis said he has worked tirelessly to become a better, more complete back so he can compete from Day 1 at Arkansas State.

“I’ve been training and trying to be versatile and just contributing to the team and helping us win,” he said. “If I’m putting in work to help the team positively, I feel like everything will be great. I want to work on everything. I don’t want to settle.”

The desire to work harder and go bigger is what drew Davis to Arkansas State in the first place. Jones arrives fresh off winning a national title as an assistant to Nick Saban at Alabama, and he takes the reins of a program where he has expectations for his team to hang with powerhouses.

Davis shares that mindset and is driven by the chance to come together and build a winner. Arkansas State is scooping up all kinds of talent with the idea in mind to do it quickly. Davis is ready to do his part the moment he steps on campus, whether that means starting or learning on the job, and his big-school experience in Texas should help.

“He can hit the ground running based on the level competition he played in Texas,” his dad, Don, said. “Arkansas State is serious about football. They had a very strong team last year, but they were just short on running backs. Jalen was the perfect pick for where they were hurting.”

From the small-town atmosphere to the Red Wolves’ need for a complete running back and all the other pieces coming together, Arkansas State also proved to be the perfect fit for Davis.

The work begins now to make the most of the opportunity ahead of him.

“It’s excitement,” Davis said. “It’s mixed emotions. My family is all here, my friends, everybody I grew up giving attention to and spending all my time with. I leave that all behind and go focus on myself.” 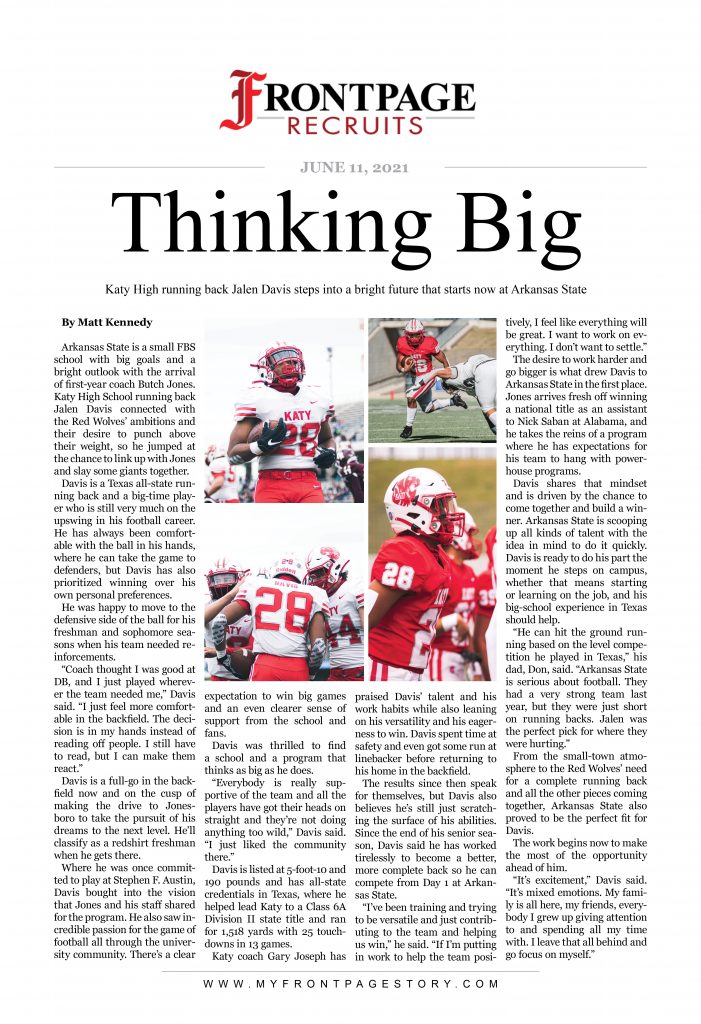