‘Truly amazing’: Brandy Miller is the wife and mother her husband Jeffrey always dreamed of 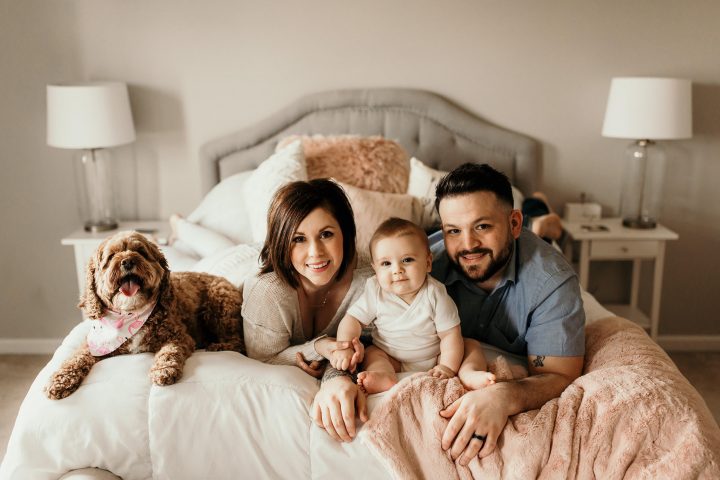 Jeffrey Miller can only shake his head sometimes. When he looks back at the chain of events that led to his first conversation with his wife Brandy, he feels grateful and lucky. But when he tries to comprehend how or why she thought to choose him, Jeffrey still can’t come up with a good explanation.

Their road to love started with a random nicety that Jeffrey never saw coming. It all began at a time when he was searching for himself. He didn’t know what he was doing or where he was going and he didn’t care about much, but then Brandy came along and changed everything.

“I met her, and she was in school and had goals and plans for herself,” Jeffrey said. “She knew what she wanted and who she wanted to be, and that motivated the hell out of me. All of a sudden this amazing woman who has plans for herself is interested in me. It made me want to be better.”

Jeffrey was working part-time in electronics at Walmart at the time and often made his way to the front of the store to catch a glimpse of Brandy in the vision department. It was innocent enough, but Jeffrey was too shy to strike up a conversation and couldn’t even fathom the idea that Brandy would ever know who he was.

Unbeknownst to him, she was doing the exact same thing. Out of nowhere, she reached out to him on Facebook to wish him a happy birthday after she overheard a coworker earlier in the day. She ended the stalemate before Jeffrey even realized there was one.

“I get this message from her on Facebook saying happy birthday, and I was like, ‘Oh, I didn’t realize she knew I existed,’” Jeffrey said. “We started talking on there after she was the one to reach out to me. She asked if I wanted to hang out, so that’s kind of how it started.”

Jeffrey wasn’t quite himself back then after returning home from the Marine Corps, but the fact that a beautiful woman he admired saw his potential, it helped him snap out of a funk. He still counts his blessings for being with her and has been a different person ever since.

Where Jeffrey once felt lucky to even graduate from high school, he is now pursuing a masters degree and getting straight A’s doing it. Jeffrey doesn’t know — or probably doesn’t want to think about — where he would be without Brandy, but he can be pretty sure this wouldn’t be it.

“That’s all a credit to her for believing in me and motivating me,” Jeffrey said. “Even now she works full time and we have 7-month-old child. If it wasn’t for her and the way she supports me, I wouldn’t be doing this now, either.”

Jeffrey has always known Brandy to be an exemplary person, but she has taken it to another level as a mother to their son Carter. She was ready for motherhood and showed right away instincts that blew her husband away.

“It’s truly amazing to see her, even with little things, little noises he makes that she somehow realizes what it means and can make him feel better,” Jeffrey said. “Being next to her makes him feel super comfortable. It’s just amazing to see her do what she does.”

None of this comes as a surprise to the people who know Brandy best. She is a successful MRI tech who works hard and provides for her family, but she was built to be Carter’s mom.

“I’m very proud of her accomplishments, everything she has done and her career,” Pam said. “She is just such a wonderful gift in my life, and I’ve watched her grow as a wonderful daughter and mother. I’m so proud to be her mother. She has such a kind, sweet heart.

“She’s so happy to be a mom. Carter brings so much joy to her life.”

But the same can be said for Brandy to her family and friends. She has been a kind and gracious friend, wife and daughter who makes all of their lives better by being in it.

“I love her more than I have ever loved anything,” Jeffrey said. “I am the luckiest person in the world. I got to marry my best friend and soulmate. She makes me want to be better.

“She knows me better than I know myself. And on top of being an amazing wife, she is the best mother. I can’t wait to live the rest of my life trying to make her happy.”