What is the history behind Weddings? Wedding season is upon us, which means you have probably received a few Save The Dates and invitations in the mail.

If you have not received any, that is okay too.

That said, since it is wedding season, we wanted to take a look into a topic that might not be talked about quite as much with weddings. Today, we are going to dive into the history of weddings, how they came about and what the point of them is.

If you want to look for a simple definition of marriage, then look no further than the first book of the Bible. In Genesis it says, “Therefore a man shall leave his father and his mother and hold fast to his wife, and they shall become one flesh.”

When two people wed, they are making vows to love one another in sickness and in health, and they are promising to be by each other’s side and never have these same feelings toward someone else. Well, that’s where things get a little tricky, as that is the cookie cutter version of what we think of as marriage today, but the reality is that is not how weddings and marriages used to end up. The true history of marriage is a lot trickier than one may think, and the evolution of marriage and weddings is actually very interesting.

In the earliest days of weddings, most marriages were arranged. The concept of marriage was more about “survival” than anything else, as many people were getting married in their teens so they could reproduce and carry on their family history. In fact, many times these marriages wound up being more about the union of two families rather than two individuals, and love and attraction was on the back-burner.

“Betrothal” was also often involved, as families took as long as a year to put together a contract for their two children to become one in marriage. They then had a beautiful ceremony with a huge feast, and the husband and wife lived happily ever after. Well, that is a very moot point, but it is something that we will leave here.

Yes, there are reasons other than love and arranged marriages as to why two people wed one another, but the concept of love being at the center of many marriages and falling in love is something that was truly not seen until much later in history. For many people, thinking about getting married for reasons other than love is a crazy concept to them, and they are glad they have the freedom to marry who they want to.

When you look at weddings overall, there is so much that goes into them as well. While it is widely regarded as the union of two people who love each other unconditionally, there are so many different types of weddings and marriages that couples consider and that are seen as “norms” today, albeit some are much more controversial than others.

White wedding – Better known as a traditional, formal or semi-formal wedding, this is the most common wedding type in the world. The white wedding originated in Great Britain and, while everyone puts their own twists on this wedding type, the most significant part is the white wedding dress the bride puts on. The first look has become a widely regarded tradition within white weddings as well, as it is the last time the groom will see his bride as two individuals and the first time he will see them as a unionized couple.

Civil wedding – This is a wedding that is seen as more of a nonreligious marriage, as it often constitutes the use of a government official to officiate and record this type of wedding. This would be the drive-through and Vegas-style weddings, but outdoor weddings can fall under this umbrella as well. Sometimes the type of wedding someone has is up for discrepancy, as some people will consider all outdoor weddings a civil wedding, while others will consider the ones with a pastor or priest marrying the couple as an outdoor white wedding.

Common Law marriage – This type of marriage is only allowed in a handful of states, as it is considered informal and is merely a word-of-mouth marriage. There are no certificates involved, as this is a marriage that is more of a formality.

Cousin marriage – This marriage type is considered a consanguineous marriage in some places, but overall it is a type of marriage that is frowned upon in different places depending on the cousin type (first, second, third, etc.).

Double wedding – This is as straightforward as it sounds. It is a shared ceremony between two couples.

Elopement – Some people may consider an elopement an unplanned wedding with a few guests, but elopements can also be planned out. The most important thing here is an elopement is always going to have minimal guests as it makes the wedding planning a lot more simplified.

Endogamy – This is marrying within one’s social group. This is widely popular in certain religions and countries.

Exogamy – This is marrying outside of one’s social group or tribe.

Handfasting – This is a Celtic ritual where the hands of the couple are tied together to represent the union of a couple.

Highland or Scottish wedding – This is another wedding where many rituals are involved, and many Scottish weddings in particular have a mix of modern and traditional rituals nowadays.

Mass wedding – This is a wedding where an innumerable number of couples gather together in the same space and have a collective wedding. It is a way to save money and time, and it is something that is a well-known tradition in Korea.

Microwedding – This is a wedding with no more than 50 guests, which keeps the wedding simplified and intricate. While many weddings nowadays have hundreds of people, the microwedding cuts off at the solid number of 50.

Military wedding – Some of the traditions within the military wedding include the men and their mates wearing their service uniforms, the saber arch that the couple walks under and carefully considered reception seating.

Monogamy – This is where you are only allowed to be married to one spouse at a time. This is considered a tradition within most weddings and marriages, but not everyone believes in this.

Polyandry – This is mainly concentrated within the Himalayas and is when one woman is married to multiple men at the same time.

Polygamy – This is widely popular within the Mormon community, as it is when a man has cowives. Oftentimes, the previous wives will all join hands during the ceremony.

Polygyny – This is another marriage type where two or more women share a husband.

Same sex wedding – This is a marriage between two people of the same sex.

Shotgun wedding – This is a wedding where the couple will “rush” their marriage in a way because they learned they are pregnant, and oftentimes they do not want to embarrass their family by people knowing they got pregnant before the wedding.

Wedding weekend – A wedding weekend involved elongating the wedding across an entire weekend, rather than having it as a one day affair. This allows for more time for the guests to get to know one another, as well as giving more than just the bridal party one last opportunity to spend time with one or both of the people getting married while they are still single people. This turns your wedding into something more than something your guests travel to the day of.

Of course, all these wedding types are viewed differently by different religions, countries and social groups, but the important thing to note is that there are a wide variety of wedding ceremony options that people choose from. There is so much preparation involved, and it is a big deal to many people, and having friends and loved ones there to celebrate with them makes all the difference in the world.

Each wedding also has a combination of important people involved as well, from the bride bridegroom – better known as a groom – marriage officiant, the best man, the mother(s) and father(s) of the bride and groom, the maid of honor, the bridesmaids, groomsmen, pages and flower girls. At the end of the day, the people involved all depend on the type and size of the wedding, but these are the traditional top people involved in a wedding. 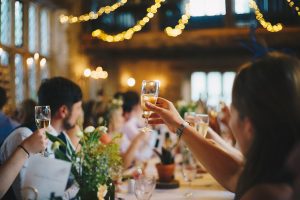 Many weddings also tend to follow certain traditions as well, from the importance of picking out and hiding the wedding dress from the spouse to the wedding reception and wedding cake smashing, as well as the couple’s first dance and them going on a subsequent honeymoon.

For many weddings, different professionals are hired as well. This can include wedding photographers, videographers, wedding planners, a DJ, an officiant, caterers and many other people.