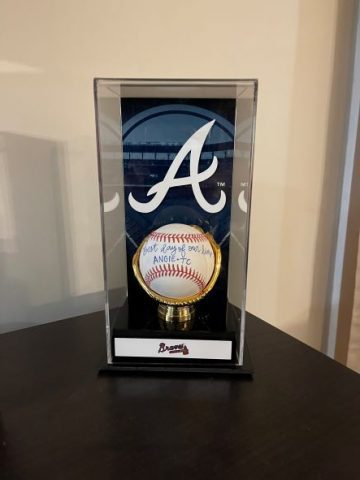 Tim Sirmans and Angie Rutland met at a Blue Angels Air Show Tim had set up as part of a tour of around 20 emergency managers and healthcare workers from the local community. Tim found her to be the most beautiful girl in the world, and he asked her out after the event. Their first date was to a Travis Tritt Concert, where they had their first kiss as Travis was playing one of their favorite songs, “Anymore”. This was the beginning of their love story.

“Her eyes are by far her best feature to me,” Tim said. “You can look into those eyes and you can see compassion, and when she looks at me, love! Her other great feature is her hair. It is the most beautiful whitish silver color. It is completely natural and almost no day goes by that we are out in public, that someone does not compliment her on it.”

“Tim means the world to me,” Angie said. “There are no such words that could ever describe what and how much he means to me. I can’t imagine my life without him in it. I have found everything I could ever possibly want or need in him. With him, I have true and unconditional love, the perfect man for me to spend forever with and my best friend.”

These diehard Braves fans are a perfect compliment to each other, and they could not be happier that they found each other in the middle stages of their lives.

Angie admires Tim’s outlook on life, as he has the most positive outlook on everything and always tries to see the good in everyone and everything. He can turn any negative situation into a positive one, and she truly admires that about him.

“Tim is unlike anyone I have ever known,” Angie said. “He is always trying to make me feel special, which he does, each and every day.”

Tim knows the exact way to Angie’s heart, and the way to her heart is her family. Early in their relationship, Tim planned a ‘lady day’ weekend for Angie, and had a weekend filled with events for her to enjoy. Tim planned a surprise for Angie by inviting her son, Dallas, and his wife, Taylor, over to have supper with them. The next morning, Tim took Angie for breakfast and surprised her by inviting her daughter, Alyssa, her husband, Cam, and Angie’s grandson, Cason.   Tim then treated her to several things throughout the day and then topped it off by cooking a nice supper and having his nephew, Jonah, perform live music for them.

“Angie is so sweet and nice, and caring,” Tim said. “At work, she holds her employees to a high standard, but she leads them to easily reach it. At home, she is so sweet, and caring. She loves to sit in her recliner and wait for me to walk by and kiss her. She smiles every time.”

Angie is also the perfect mom, and Tim admires that about her. She loves her family so much, and she would not trade spending time with them for the world.

“My mom represents strength and courage,” Alyssa said. “Over the years I have seen her fight and go through more than one person should. She’s always put her children first and never made us second guess her love. Through the hardest times she has always been my rock and the backbone of the family.”

Angie is a family-first woman, which is why they have involved as many of the family members from both sides in the wedding festivities, from Alyssa serving as the maid of honor to Dallas walking her down the aisle (she wanted both sons to walk her down the aisle but unfortunately her son Austin is in Alaska). Tim’s brother Scott married them and Jonah provided the music entertainment. The grandsons, Cason and Issac, served as the ring bearers, and Angie’s niece, Addisyn, as the flower girl.

For Tim, he has fit right in with Angie’s family. They adore him and care about him, and are ecstatic for him to officially become part of the family.

“My family adores Tim,” Angie said. “My children think the world of him and they can see how extremely happy he makes me. He fits in perfectly with my family.”

Tim even calls Angie’s grandson, Cason, his buddy. He loves wrestling with Cason and Cason makes Tim feel young again, even though it may make him sore for a few days after hanging out with him.

“Tim means thoughtfulness and loving,” Alyssa said. “He has brought so much light into our family in a short amount of time. He has an unconditional love for my mother and my son. We are thankful to be bringing him into our family.”

“I love his sweet and kind nature, and of course his very funny personality,” Angie said. “He makes me laugh and smile so much each and every day, even when I don’t feel like it. I have laughed more in the short time we have been together than I have probably my entire life. He also makes me a better person just by being himself. He makes me want to be the best version of myself because he deserves no less than the absolute best.”

From helping Tim with his minor PTSD to having each other to go to a plethora of Braves games with, Tim and Angie are a great duo.

“I think the most memorable story is my asking her to marry me,” Tim said.

In February, they decided to combine their finances, so Tim had to make a choice. Ultimately, he bought the ring before the process was complete, and he called Alyssa and asked if she knew what ring Angie would like. She knew the exact ring and knew it was the ring that would mean everything to Angie.

Tim topped off their relationship by proposing to Angie at a Braves game. Angie does not like a lot of fanfare, so Tim knew it had to be simple. He waited between innings, got down on one knee and asked her. The Braves organization made it their most special day ever by providing them with a game ball with their saying “Best Day of Our Lives”

These two Braves fans have a lifetime of happiness ahead of them, and they are so happy they found each other. They are soulmates who cannot wait to spend the rest of their lives together.

“For me, I think the most memorable part of our wedding day was when we were standing before God, each other and our families exchanging our vows,” Angie said.

“I just wanted to say how thankful I am of my mother and Tim for everything they do for me and my family,” Alyssa said. “I can’t wait to watch them grow older together.” 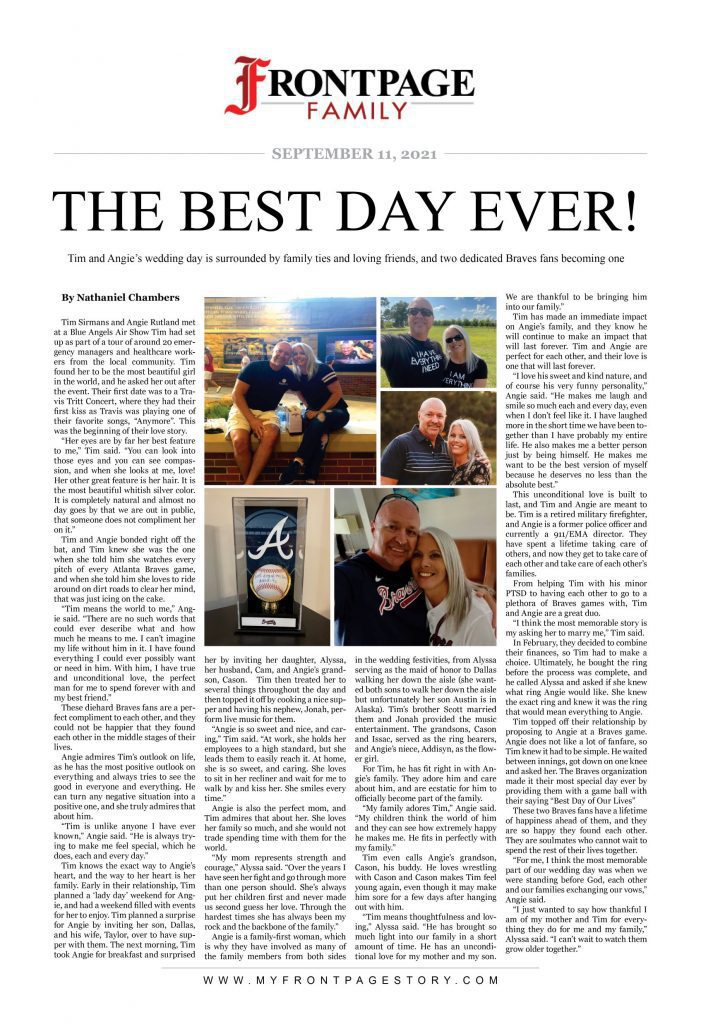