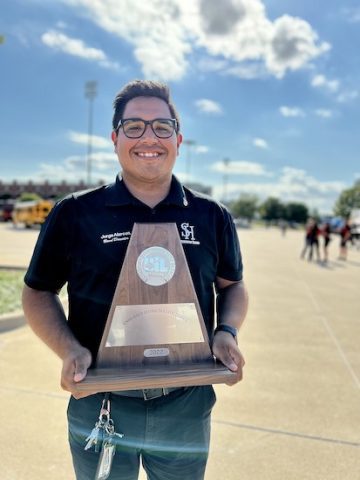 Don’t believe us? Just ask Jorge Alarcon and his family.

Jorge just accomplished one of the most remarkable things in marching band. He led the South Hills High School marching band to a 4A Division I finish during the field championships. Not only was it their highest finish in school history, but Jorge was able to help them accomplish this feat in his first year as a head director.

“My brother is a Head Band director at South Hills High School,” his family said. “He teaches music, marching, concert music as well as jazz music. He is extremely involved with the band’s booster club as well. He takes charge and goes above and beyond in creating extracurricular activities for his band students as well.”

Jorge has the ability to lead and he is not afraid to step into any role he is needed in. He is a very accomplished young man who recently graduated college… the first person in his family to do so.

Jorge’s always been an overachiever… in a good way. He has always gone above and beyond his goals and aspirations, and he has his parents in particular to thank for this trait. His parents have been his biggest inspiration and support throughout his entire life, and his siblings know he is thankful for them.

“My brother is the joint hardest worker I’ve ever seen in my life,” Jorge’s brother Abraham said. “There is zero doubt he got that trait from Dad. He takes on any task that is presented and always overachieves to levels I didn’t think was possible. I know my brother is always inspired to do the best job he can because of our parents who have always supported him and have always given him love and support since we were kids.”

There is not a challenge Jorge cannot conquer. From moving out of state to attend college to being the first to graduate from his family, no challenge has been too tough for him to face.

And now he is leading a high school’s marching band in his home state to levels they have never reached before. He elevates the people around him, and Jorge’s life is a success story.

He is also someone who is very caring as well. The Alarcons are all better people because of who Jorge is, and they are thankful to call him son and brother respectively.

“He’s never stopped caring about our parents or my sister and myself,” Abraham said. “The same way he means the world to us, I know we mean the world to him. He’s never been a troublemaker either, and he has always been focused on being the best person he can be.”

Jorge is a special soul. He loves his family – including his dogs Charger and Annie – and they love him. He has accomplished so much and he is just constantly making the lives of those around him that much better.

“Our parents, my sister and myself are so so so so extremely proud of all the hard work he has done, and most importantly we are extremely proud of who he has become as a person. His achievement of leading his marching band to his school’s first ever Division 1 rating in a UIL marching competition is the culmination of his work ethic and of our love and support for him. We love him so so so much!”

Congratulations on everything, Jorge!