A Star is Born: Herbie and Maggy Rinaldo Sax feel lucky to have a daughter of their own 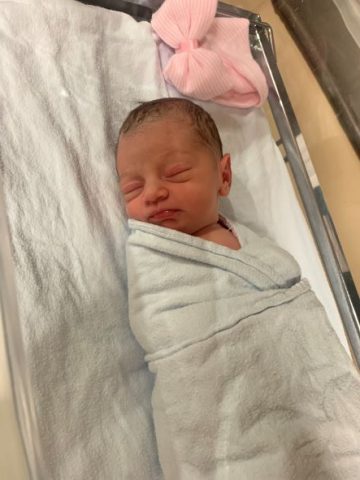 Avery Mila Rinaldo Sax was born yesterday evening, August 22, 2021, at 6:41 p.m., at a healthy 5 pounds 7 ounces. She is named after her great-grandmother, Eva Sax, while Mila is in honour of her Geebee (grandfather), Michael Rinaldo.

“Avery is so special because she has changed our lives and allowed us to be parents,” her father, Herbie said. “We feel so incredibly lucky to have a little girl of our own.”

Her parents, Herbie Sax and Maggy Rinaldo Sax, met back in 1998, when they were nine and seven years old, and their fate was seemingly set from an early age. They played Simba and Nala in a production of “The Lion King” at Camp Wahanowin, and they remained acquaintances for years after that. Herbie and Maggy were even on stage a few more times together, but never played love interests again.

After losing touch for around eight years, Avery’s parents reconnected in 2014. They went on a first date soon after and many more dates would follow.

“I fell in love rather quickly,” Herbie said. “I moved into Maggy’s condo in late summer of 2015.”

After Maggy saved Herbie’s life when he suffered a health scare back in 2017, their love deepened. He proposed a year later and Maggy happily obliged.

“I had a choir of kids come out and sing a mashup of ‘Can You Feel the Love Tonight’ and ‘Thinking Out Loud’ in the same spot where Maggy and I sang our first duet at Wahanowin 20 years earlier,” Herbie said.

The couple married less than a year later on June 23, 2019, and they have been there for each other ever since.

“Maggy was super supportive of my career,” Herbie said. “I went through many career changes, and she was understanding and encouraging every step of the way.”

In everything, Herbie and Maggy always make sure to support each other and that’s how they plan on operating as parents.

“I want Avery to love to watch sports with her Daddy,” Herbie said. “Specifically, my Raptors, Rams and Jays. But I think both of us would love to see our daughter involved in theatre. We won’t force her into anything, but we both love to sing and would love to see her take after us. She would be a star!”

While her parents dream of sharing the stage with Avery, they will be proud no matter what hobbies she takes up and no matter the career path she chooses. They don’t want Avery to feel pressured to do anything, but want to always encourage her and push her in the right direction.

“We want our daughter to know that we’ll always be there for her and support her in everything she does,” Herbie said. “We are both incredibly proud and excited to be her parents.”

Avery’s Mother, Father, Bubie, Zaida, Mimi and dog Lowry are so proud of the amazing little girl she is. They know Geebee is looking down on her with a smile on his face as well.

“We are so excited to watch you grow and we will love and care for you every step of the way,” Herbie said. “You have changed our lives and we are so incredibly lucky to be your parents. We love you so much already and always will!”