‘She Makes Me Better’: Kristen makes a huge impact on Chad’s life

“She makes me want to do better things for us to make her proud of me.”

When you hear Chad Lauga say that about his fiancé, Kristen Cowen, you can tell that he really means it.  Chad is so in love with and enamored by Kristen that, more than anything else, he wants her to know that and make her proud.  You don’t hear guys say that making their significant other proud of them is their priority but for Chad it’s true.

Really, it’s been that way since their first date at Nocello’s on April 10th, 2013.  And yes, Chad does know the exact date which is another example of something most guys wouldn’t or couldn’t do.

“I liked her so much, I had to go out on a date with her again, like the next day,” he said.

“It didn’t take long to know that she was the one.”

The way Chad describes Kristen, how can she not be the one?

“She’s independent, beautiful, and a rocket scientist. I love her more now than the day I met her.”

Kristen is an amazing mom to her daughter Haley and about to become an even better grandmother in March if that’s even possible.

“Everybody knows that her daughter comes first.  She will and has done whatever it takes to make sure her daughter had everything she could want and more.  Kristi can’t wait to be a grandmother!”

One of the ways you can tell Chad’s love for Kristen is so genuine is the incredible pride he has in Haley’s accomplishments and the joy he had in watching her play volleyball in the SEC for the LSU Tigers.

When you care for your significant other’s children like they were your own you know it is the real thing and Chad could talk about Haley for hours.

Whether they are drinking wine going down the Grand Canal in a gondola under the Rialto Bridge in Venice or just going to Rocky & Carlo’s for Friday night dining, Chad is happiest when he’s with Kristen.

“I wish I would have met her sooner in life so we could have spent that much more time together,” he said.

They are making up for that lost time now.

Whether it’s the festivals in New Orleans or going to the camp on Lake Catherine or even playing aviator games at an Air Force Museum between Gainesville and Columbia, South Carolina, Kristen always has Chad both laughing and content.

“I want her to know that I love her more than I’ve loved anybody else in my lifetime and that she makes me want to do all of the right things to keep her loving me.”

“And most of all that I love her daughter and can’t wait to be her kids Papan!” 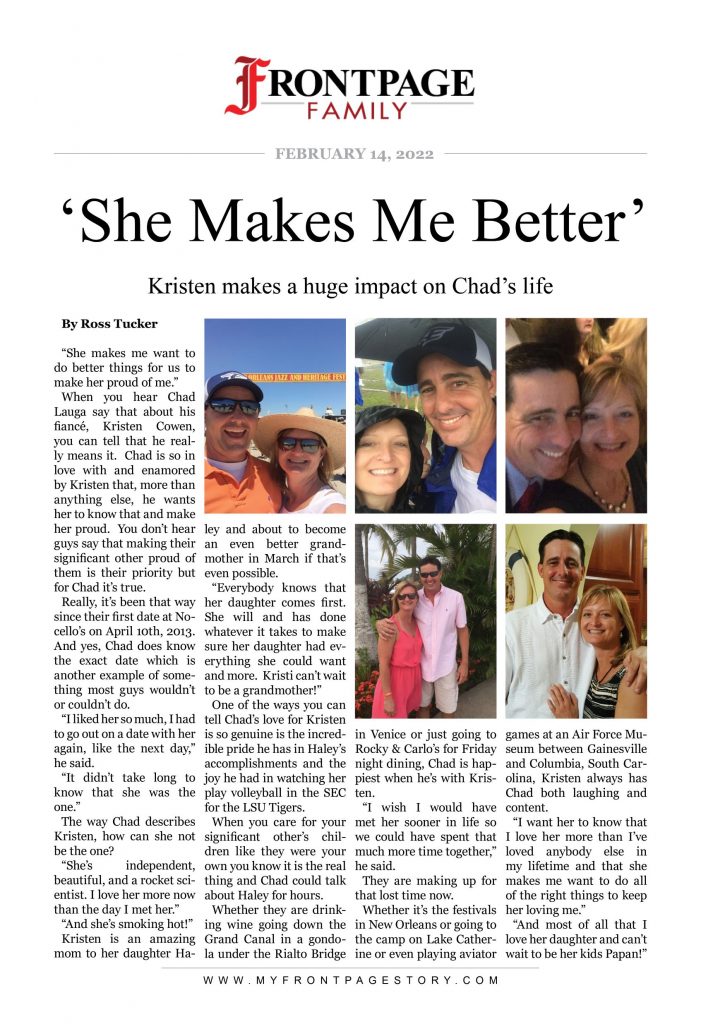