For every prudent choice Jonathan Wylie has made in his lifetime, there’s a Red Granite stunt tape or a little brother who reigned over his tricycle ready to strike if his sister dared to even look at it.

And for all the stories of the gentleman he is now and the beyond-his-years kid he once was, there’s a Jonathina who was held down and forced to paint his nails.

Jo learned from his hardships and mistakes, and through the example of his parents, David and Ruth. He also got all the priceless “perspective” he could handle from his older sisters Sarah, Rebecca and Deborah.

Jo celebrates his 30th birthday as a man of many sides, but one who is also universally admired for the investment he makes in what matters most in life. He is an adoring husband to his wife Heidi and their daughter Claire and their soon-to-arrive son.

He is also a hard worker, a wise decision-maker, and a top-secret goofball who manages to not take all the serious stuff in life — or himself — too seriously.

“He’s driven, and he’s always been wise beyond his years,” Sarah said. “He’s also responsible. He bought his first car when he was 15 with cash he saved up from his paper route and doing odd jobs. He’s goal-oriented, fun, adventurous. He’s just an impressive person and someone you can always rely on, trust and confide in.”

Before he grew to be a 30-year-old father of faith and values, Jonathan was a tiny troublemaker who was known to pop out of laundry baskets to scare his sisters. He could also be found scaling the kitchen cabinets in search of peanut butter he loved to dip in sugar.

Jonathan showed signs along the way that he had a heightened understanding of life, but he also couldn’t help himself at times.

Deborah had perhaps the best seat in the house to watch Jonathan’s growth from the naughty kid with “MacGuyver” hair to now being the portrait of a good, Christian family man.

“He was bad,” she said. “He would never smile for pictures. He would throw temper tantrums. One day, he wanted a banana and the only one we had left was rotten and had to be thrown out. I said, ‘You can’t eat that, it’s disgusting.’ He started banging his head against the wall until we gave it to him. I don’t know how he switched, but he was a bad little kid.”

The paper route was a perfect example of the tiny adult in him that was always looking to get out. He got that first job as a teenager, not to buy candy or toys or video games, but to save up all the money and buy his first car with straight cash. The only occasional setbacks along the way were his sisters “borrowing” from him.

That anecdote says a lot about Jo’s priorities, but there’s so much more to the story. As a kid, he learned by watching as the family immigrated to the United States from Oranjemund, Namibia, ran into hard luck, and struggled at times to make ends meet.

Jo observed and learned from that experience, and he began applying those lessons at a young age. Now, he works as a financial advisor and values the chance to lead others down a path toward financial freedom and success.

“Jo always said he was going to make a good living so his family would not be stressed out financially, like how we grew up as first-generation immigrants,” Becca said. “He has stayed focused and worked hard to get to where he is now. He was given nothing and earned everything.”

Once described as the “golden child” of the family because of how easily life seemed to come to him, Jo has never stopped working to be the best brother, son, brother, husband and father he could possibly be. Faith and family are cornerstones of who he has always been, but so is a good, honest effort in everything he does.

As he celebrates his 30th birthday, Jo has made the full transition from the good-hearted kid who dabbled in mischief into the gentleman whose focus and priorities are unshakable. Jo works hard to lift up those around him, most of all his family.

“He’s a sacrificial husband, for sure,” Sarah said. “He does the dishes every night, and he always praises Heidi for her dinners. He’s constantly thinking, ‘How can I put them first?’ He proves they are the most important thing to him, and he does that through his actions.”

Actions have always spoken the loudest for Jo, and his whole family has a clear sense of pride in watching him grow into the man he is today. He is the younger brother whose example inspires even the older sisters who once tormented him.

For Becca, Jo is a tremendous example of living in the moment and living for others.

“He taught me YOLO, you only live once!” Becca said. “He has challenged me to love others, be patient and generous in spirit, and try to see from others’ perspectives. Most parents realize too late how quickly the time goes and then your kids are gone. Jo does not. He cherishes his time with his family and always puts himself last.

“His is a life that changes the world for the better through daily interactions and kindnesses. He’s the youngest of us all, but we all look up to him. I couldn’t ask for a better brother. Love him forever.”

Balance comes to mind for Deborah, who is the closest in age.

“I would say just how impressed I am and inspired by what a good dad and husband he is,” she said. “He takes all of his roles in the family and his life seriously, and he does them well with a great sense of humor and lightness.”

Where Sarah once was pretty open that she wished Jo were a third sister, she added that she couldn’t have asked for a better brother.

“Of his numerous accomplishments and achievements, none compare to the strength of character, integrity, and genuine compassion he models in his daily life,” Sarah said. “I admire and am inspired by his selfless leadership in serving others. I just love my little brother, truly the best brother in the world!” 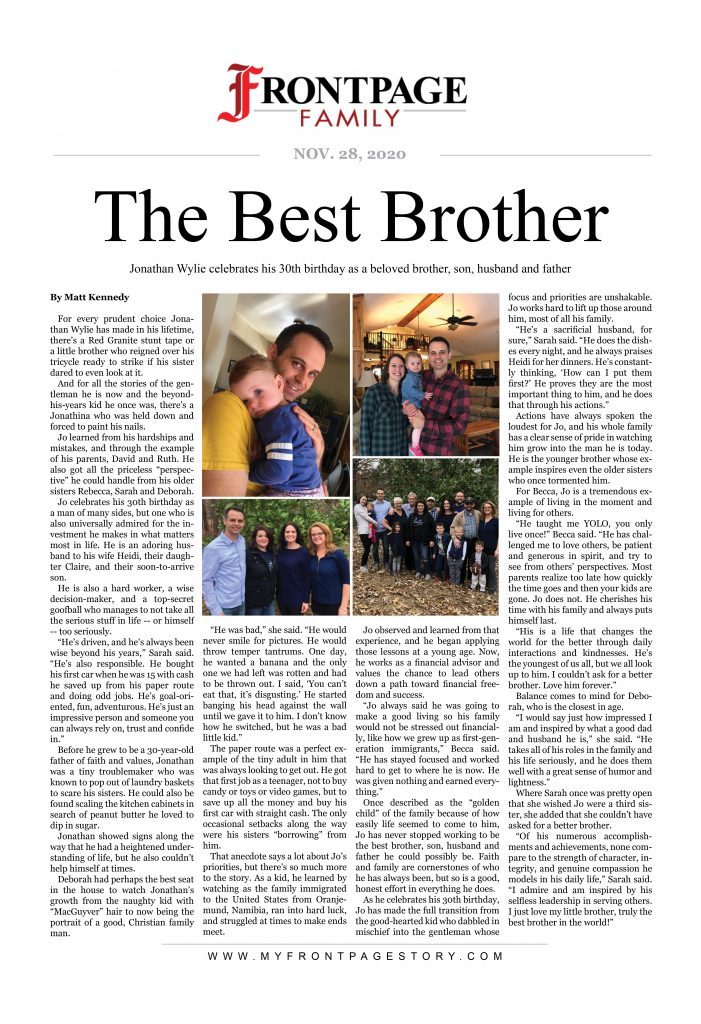