‘Always Giving’: Kim Zaayer is loving, dedicated and always ready to sacrifice for her Brian and their sons, Xander and Jaxon 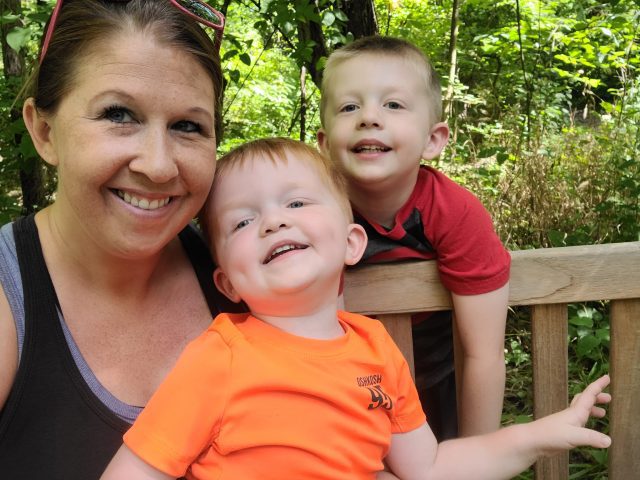 Kim Zaayer is a believer in keeping her two boys, Xander (5) and Jaxon (3), in constant motion. They are always learning or doing something constructive, and Kim is teaching them to seek out adventures instead of plopping them down in front of a screen. Doing so requires her best effort and a commitment to the boys’ future, which is one she gladly makes every time.

Kim’s job raising young sons isn’t for the faint of heart, but she makes it a little easier on herself by genuinely putting Xander and Jaxon’s needs ahead of her own. She does the same thing for her husband, Brian, and is happy to sacrifice her time, her energy or her career if it can benefit anyone in her family.

“She always puts the boys first and is always loving,” Brian said. “Before the pandemic, it was, ‘What can we do today? Where can we go?’ She does everything she can to enrich their lives and make sure they have a wonderful day.”

This day, Christmas, is a perfect example of Kim’s effort to make every occasion wonderful for her boys. She was born on Christmas Day and grew up with two of her best holidays always being combined into one day.

That wasn’t easy to navigate as a kid, but now as a mom, Kim is totally satisfied with the day being all about her kids. All she needs is a Dairy Queen ice cream cake and, pandemic aside, maybe a nightcap with friends. The rest of the day is a celebration for Xander and Jaxon.

“She always gives a lot more than she gets,” Brian said. “She’s always giving and always thinking of other people.”

Under trying circumstances, Kim is giving even more to her sons than ever. She gets Xander’s mornings started with virtual kindergarten, then hustles around the house, cleans and takes care of Jaxon until Xander’s day is done. Then, the real adventure begins with activities, games and outings.

Xander learns all day and looks forward to the chance to have fun with his mom when the time comes. He is also getting old enough to see a situation where he looks forward to returning the favor and starting to help her instead.

“I do like when she brings us to the park,” he said. “And some day I am going to make her a sandwich all by myself. I love her more than anything in my entire life.”

Brian made that same proclamation of love not long after they met playing volleyball, which is still one of their favorite things to do together. Brian and Kim were friends in the same circle until they started talking and everything clicked.

While that realization set in for Brian, Kim was already making plans. According to Brian, Kim told friends that she was going to marry him some day, which is exactly how it played out as she pursued him. Years later, the roles are now reversed.

“She really pursued me, and I quickly succumbed,” Brian said. “And now, I’m the one who follows her around like a little puppy dog. She is the nicest person to me in my life.”

Brian, Xander and Jaxon all follow Kim’s lead now because she is at the heart of everything the family does. Kim is a great mom and an influence on Brian to be a better, more considerate person. So much is made possible for the whole Zaayer family because Kim works so hard to make it happen.

She is organized and dedicated, and she walks that line between being the center of Xander and Jaxon’s universe while still giving them the structure they need. All Kim asks in return is a glass of wine once in a while and a date with “The Bachelorette” or “Dancing With The Stars” on her back porch.

“She is the center of our family’s world,” Brian said. “She does everything for us. She keeps us all in line and we revolve around what she does for us, which is everything.”

And whether Kim is with Xander at the park, teaching him or playing Transformers with him, there is truly nothing he loves more in this world than his mom.

“I love you more than the Earth!” he said. 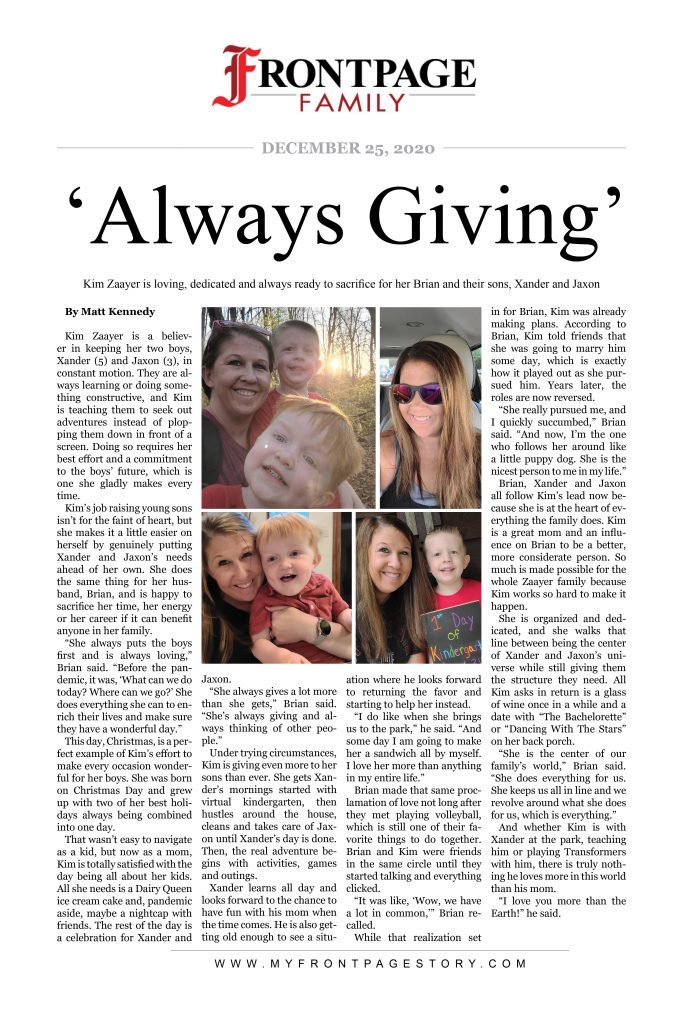