‘She’s not only our backbone, but our heart’: Dianna Appel would move mountains for her family

From the first time that he spoke to Dianna, Charlie Appel knew that they had a special connection.

“I met Dianna in 2015, we have been inseparable ever since,” Charlie said.

From texting each other endlessly to yearning for more time to spend with each other, it wasn’t long until Dianna moved into Charlie’s apartment.

Quickly after, the pair bought a house together in 2017 and married in 2018. Charlie will never forget the moment that he asked Dianna to marry him in front of their future home. As the video stopped recording, Charlie knew that this would become a cherished moment for just the two of them to share and remember.

Since then, Charlie has never been happier sharing his life with Dianna. “Any memory with her is a good one,” he said. “Whether it’s exciting, or just relaxing on a hammock, a night in, or just hanging around the house with our boys.”

Some of his favorites, however, are dancing all night at the carriage house while Stevie Swags was hitting on older women, the trip to Maine during a monsoon, and the chocolate teeth incident where they all ended up looking like a bunch of idiots.

The time that they spend together is both treasurable and priceless. Charlie says that they always have a great time even doing the monotonous things such as running errands.

Yet, he also enjoys spending time with Dianna and their two kids, Harrison and Charlie, as well. Watching her with the kids always puts a smile on Charlie’s face.

Her selflessness doesn’t go unrecognized as it is apparent in her motherly dynamic. Never failing to put her family’s needs before her own, she goes above and beyond for them and only then thinks about herself after.

“She is the best mother and wife we could ever hope for,” Charlie said. “She shows so much love to us.”

Even when Charlie fails to be serious at times, Dianna’s superb sense of humor always manages to uphold her patience with him.

“Her ability to put up with my nonsense and tomfoolery is unmatched,” he said. Above all, “she lets me be me, unfiltered, and has fun doing it.”

For that, Charlie believes that Dianna elevates him as person each and every day. Accepting him for the way that he is, she is able to tell him when he is wrong, and he is extremely grateful for that.

“She’s not only our backbone, but our heart,” Charlie said.

Without Dianna, their family wouldn’t function the way that they do, and Charlie wouldn’t be the man that he is today.

Teaching him forgiveness and acceptance, Dianna exudes a light in Charles that he didn’t have until he met her. 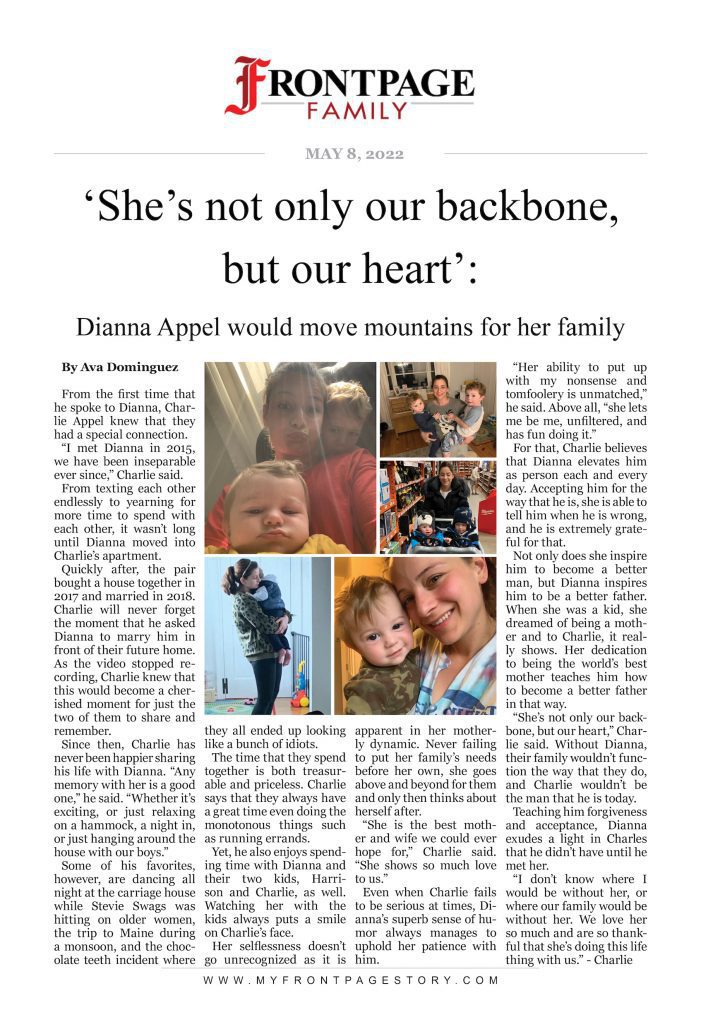