Everyone’s ‘Oma’: Helen Koppenhaver laid a foundation of hard work and a focus on family 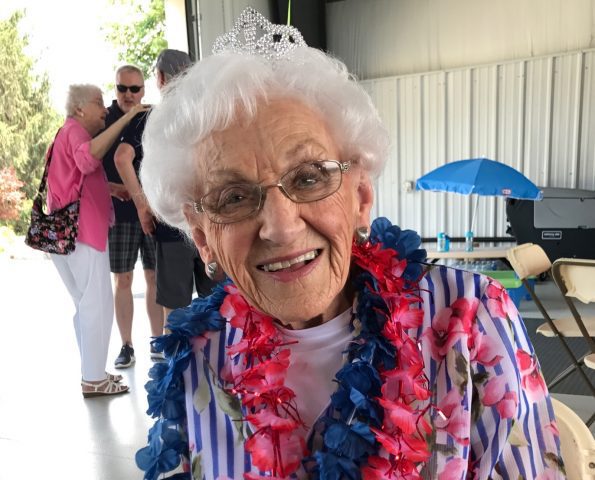 “Oma” is a German term with a simple translation, but its meaning runs so much deeper for Helen Koppenhaver.

Oma is how Helen’s 10 grandchildren and seven great grandchildren so fondly refer to her. It’s a statement of fact, sure, but also a symbol of love and respect for a woman whose shining qualities have changed a family forever.

As a mother to four children, Oma set a tone of positivity and of valuing relationships above all else. She was a business owner who dedicated her life to serving her customers, but she and her husband “Opa” Carlos were also active in their family, showed up to everything and played valuable roles in their community.

“She’s not Oma to just her kids and her grandchildren and great grandchildren,” daughter Mary Field said. “She’s Oma to the community. She loves to cook. She loves to bake. She’s crazy for sports. She always went to all of the local high school’s baseball, softball, basketball and football games, and all the kids waited for her because they knew there would cookies.

“She’s Oma to a lot of people in the community. She has a really, truly fabulous outlook on life and she’s always seeing the glass half full. She’s always being kind. She always treated everyone the same whether it was a janitor or if she met the president of the United States. It’s the same.”

That attitude can be found in the generations to follow. It was also the foundation of Oma’s marriage and at the heart of their general store, where customers always came first. Oma and Opa sold just about everything at the store, and they built a business with a core mission of serving their customers, regardless of what their needs were.

“People in the community often fell on very hard times,” daughter Jane Weigel said. “I remember somebody’s dad would get hurt in the coal mine and they’d give them groceries. They would keep track of it in this little book. I remember seeing Dad years later would crumple it up and throw it away. They didn’t have the heart to collect in hard times.” 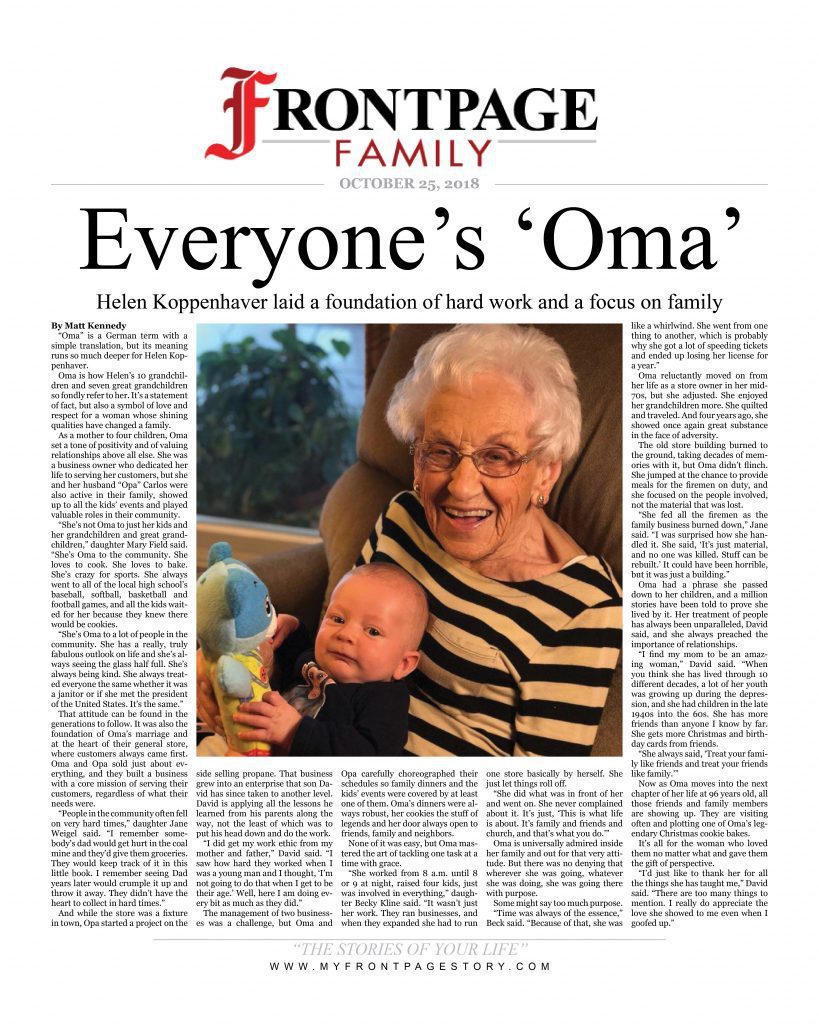 And while the store was a fixture in town, Opa started a project on the side selling propane. That business grew into an enterprise that son David has since taken to another level. David is applying all the lessons he learned from his parents along the way, not the least of which was to put his head down and just do the work.

“I think I did get my work ethic from my mother and father,” David said. “I saw how hard they worked when I was a young man and I thought, ‘I’m not going to do that when I get to be their age.’ Well, here I am doing every bit as much as they did.”

The management of two businesses was a challenge to the family’s day-to-day life, but Oma and Opa carefully choreographed their schedules so family dinners and the kids’ events were covered by at least one of them. Oma’s dinners were always robust, her cookies the stuff of legends and her door always open to friends, family and neighbors.

None of it was easy, but Oma mastered the art of tackling one task at a time with grace.

“She worked from 8 a.m. until 8 or 9 at night, raised four kids, just was involved in everything,” daughter Becky Kline said. “It wasn’t just her work. They ran businesses, and when they expanded she had to run one store basically by herself. She just let things roll off.

“She did what was in front of her face and went on. She never complained about it. It’s just, ‘This is what life is about. It’s family and friends and church, and that’s what you do.’”

“Time was always of the essence,” daughter Rebecca Kline said. “Because of that, she was like a whirlwind. She went from one thing to another, which is probably why she got a lot of speeding tickets and ended up losing her license for a year.”

Oma reluctantly moved on from her life as a store owner in her mid-70s, but she adjusted. She enjoyed her grandchildren more. She quilted and traveled. And four years ago, she showed once again great substance in the face of adversity.

The old store building burned to the ground, taking decades of memories with it. But Oma didn’t flinch. She jumped at the chance to provide meals for the firemen on duty, and she focused on all the people involved, not the material that was lost.

“She fed all the firemen as the family business burned down,” Jane said. “I was surprised how she handled it. She said, ‘It’s just material, and no one was killed. Stuff can be rebuilt.’ It could have been horrible, but it was just a building.”

Oma had a phrase she passed down to her children, and a million stories are told to prove she lived by it. Her treatment of people has always been unparalleled, David said, and she always preached the importance of relationships.

“I find my mom to be an amazing woman,” David said. “When you think she has lived through 10 different decades, a lot of her youth was growing up during the depression, and she had children in the late 1940s into the 60s. She has more friends than anyone I know by far. She gets more Christmas and birthday cards from friends. I can’t imagine having that many.

Now as Oma moves into the next chapter of her life at 96 years old, all those friends and family members are showing up.

They’re visiting often and already plotting another one of Oma’s legendary Christmas cookie bakes. It’s all for the woman who loved them no matter what and gave them the gift of perspective.

“I’d just like to thank her for all the things she has taught me,” David said. “There are too many things to mention. I really do appreciate the love she showed to me even when I goofed up.”