Full Circle Of Love: After years apart, Lauren came back into Jay’s life and changed his trajectory forever 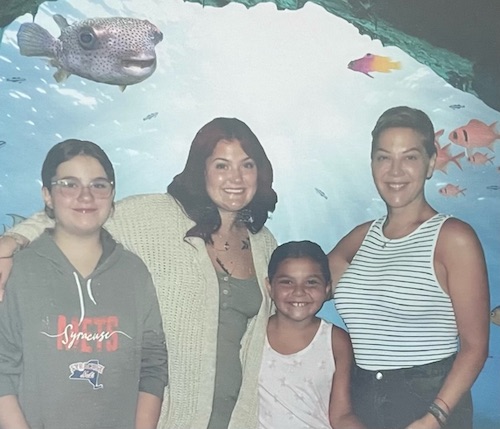 Lauren Angelone is the light of Jay’s life. She has helped him through so many things, and he knows he could not get through life without her. She brings his life meaning and fulfillment as she is his absolute world.

“She is the pillar of strength for me,” Jay said. “She makes me feel good and strong and loved; and beautiful and relevant and supported. She means everything to me. I would not even be here had she not come back into my life.”

Lauren and Jay actually knew each other growing up. However, they had gone their separate ways for 24 years before finding their way back to one another. And ever since that first reencounter, Jay will tell you he has not looked back since.

“She saved my life, literally,” Jay said. “She is beautiful, strong, spiritual and intelligent. She is an empath for all! She cares for all! She is an amazing, loving mom to her three daughters – Nina, Sofia and Harlow. She has the singing voice of an angel. We enjoy playing music together as I am a guitar player.”

The impact Lauren has had on her Jay’s life is truly irreplaceable. He knows that she has helped turn his life around, and he is thankful for that.

But who exactly is this woman who Jay loves and appreciates more than anything in the world?

Well, Lauren is someone who has a great personality for starters. She is a genuine person who cares for all people. She has the ability to be there for everyone and makes so many sacrifices for others.

“What stuck out to me right off the bat was her kindness,” Jay said. “Lauren has a lot of empathy. I was a project, and she couldn’t shy away from it. She knew I needed help and she was there. And she does that for anybody. She was there for me just as a friend, and I love her for that.”

Lauren has the backs of the people she cares about, and that is something that Jay nor anyone else take for granted. They appreciate just how hard Lauren loves and they are thankful for the great things she does for people.

“She raised her daughter Nina basically all on her own,” Jay said. “Lauren was 22 years old when she had Nina, and she put herself through school while raising a kid. People were ducking out of her life so often, but her girls remained her constant. She graduated and got a masters degree in social work. All her kids are just as strong as she is too.”

Lauren has a lot of perseverance and a whole lot of dedication. She does not give up on anything in life, and while having a daughter at just 20 changed her life, she did not let it be anything but a blessing. Going through school while raising Nina was something remarkable and something that showed a lot of determination, which is why it is no wonder Lauren was able to do it all.

Lauren’s daughters are her world, and she certainly makes that known, but Lauren is also a people person as was mentioned before. She treats everybody right and is a great person to be around, and that’s why so many people are drawn to Lauren.

“Aside from being kind and open-minded, she tries to treat everybody with kindness,” Jay said. “Even when they don’t deserve it, she tries to be that kind person.”

Lauren is willing to give people the benefit of the doubt. After going through so much adversity throughout the course of her life, she has realized that everybody makes mistakes, but everyone also deserves to be forgiven.

Lauren is also someone who is a force at her workplace. She started by working with younger kids but has now moved up to more of the adult realm of social work, and she excels everywhere she goes.

“She gets the opportunity to work with people of all ages,” Jay said. “She started out with children and leaped this year into the medical field at Upstate University Hospital. She completes the circle. She tries to bring everything in life full-circle. She started with kids but now works with adults who have seen trauma. Given her kindness, people see her and they want to talk to her. She wants to impact their life somehow and they look to that.”

No matter where she goes, people are drawn to Lauren. She has been through a lot and wants to help others get through whatever it is they are going through. She treats everyone so well, and Upstate University sees her for it!

“Lauren’s compassion and her strength is powerful,” Jay said. “She can make conversations with anybody. She is a quite amazing piano player and singer too. When she was younger that’s what she wanted to be. She then was going to be a nurse like her mother, but she decided to roll it over in social work.”

No matter how you look at it, Lauren has always had a heart for taking care of others. It is her passion and lifelong mission to help people out, which is of course what she has done with Jay and numerous other people as well.

She is also very talented, as she can sing and play the piano. That is something that Jay enjoys doing in their free time, as he will pull out his guitar and they will strike up some tunes.

Though that is not the only thing Jay enjoys doing with Lauren. Anything he gets to do with her is time well spent, but there are some things that he just cherishes a little bit more.

“We love sitting outside and having coffee,” Jay said. “She loves to be outside. We enjoy going to see live music. We’ll spend weekends in the woods, just being outside. She never misses an opportunity to dress up either.”

Lauren has a knack for adventure and she loves nature, but she also loves to be formal as well. There is nothing not to appreciate about this woman, as she is multi-faceted and has a well-rounded personality.

Jay loves Lauren more than anything, and he is so grateful that she came back into his life. “It’s like the universe has conspired to make it happen”, to quote The Alchemist. He would be lost without her, and that is why he celebrates and cherishes her every day. 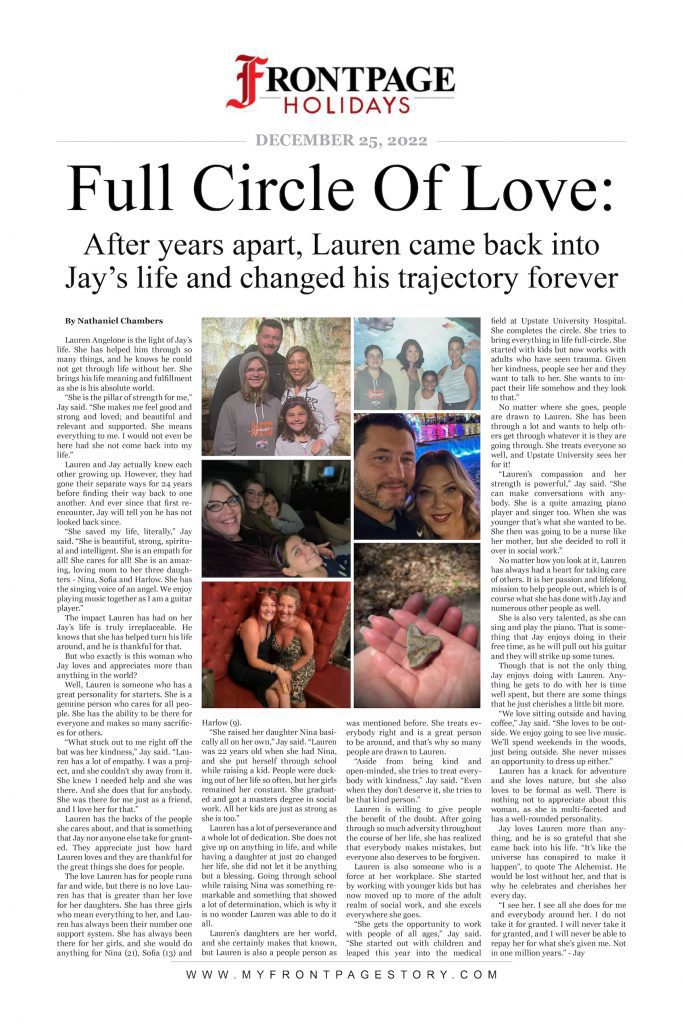