‘God’s Plan’: Doug and Anna believe that it was a higher power that brought them together, and they are thankful for that fact

Some couples believe in fate. Others believe God brought them together.

Doug Rice and Anna Cunningham fall in the latter category, as they both know that being together is all part of God’s plan.

When Doug talks about his wife, he points out the fact that she is a strong believer who attributes everything to God, and on top of that she is a wonderful wife and mother. She would do anything for Doug, their son and her stepsons, and she is always making sure that her family is her top priority.

“Anna is selfless and adores our son Erik,” Doug said. “She loves animals and the environment. She sees beauty in a desert as well as the tropics. She adapts to hardship and looks for the bright side of situations. She is beautiful and kind. She loves her heritage and tries to pass on her Swedish traditions to our son.”

Anna wants what is best for Erik in every situation, and she is always doing whatever she can to support him.

She hails from Sweden, and she believes in the importance of remembering where you came from. She is proud of her heritage, and she wants her son to appreciate where his mother came from.

She is also a hardworking individual who is highly sought after in the travel industry, as she is one of just a handful of people in this country that has the know-how of the system operations. She is trustworthy as well, which has made her perfect in her role in corporate travel.

“I admire her tenacity,” Doug said. “She is always truthful and never lies. She notices when people are sad or angry when it is not obvious and wants to help. She maintains deep friendships too.”

Anna is someone who can always be counted on, and she is someone who has such selfless ambition. People love being around her, and people definitely love getting to know Anna.

She is also someone who has so many hobbies, and Doug says her interests are a big part of what makes her who she is.

Anna is such a well-versed person, and it makes sense why Doug loves her so much.

She is also a fun-loving individual who loves to poke fun at people in the most loving way possible, and her lighthearted attitude toward life makes her such an interesting person… in a good way.

“One memory that sticks out is when Erik won the school spelling bee and went to the county finals,” Doug said. “He was so nervous he spelled shepherd as ‘sherpherd.’ We gasped and were so sad for him. Now whenever he tries to say he is smarter than his parents, we ask him to spell shepherd.”

This, of course, is all in good fun, and it goes to show how much fun and enjoyment Doug and the entire Rice family gets out of spending time with Anna.

Doug loves his wife so much and is glad that he gets to spend the rest of his life with her.

“Our lives didn’t come together by accident; God aligned our lives to be together,” he concluded. 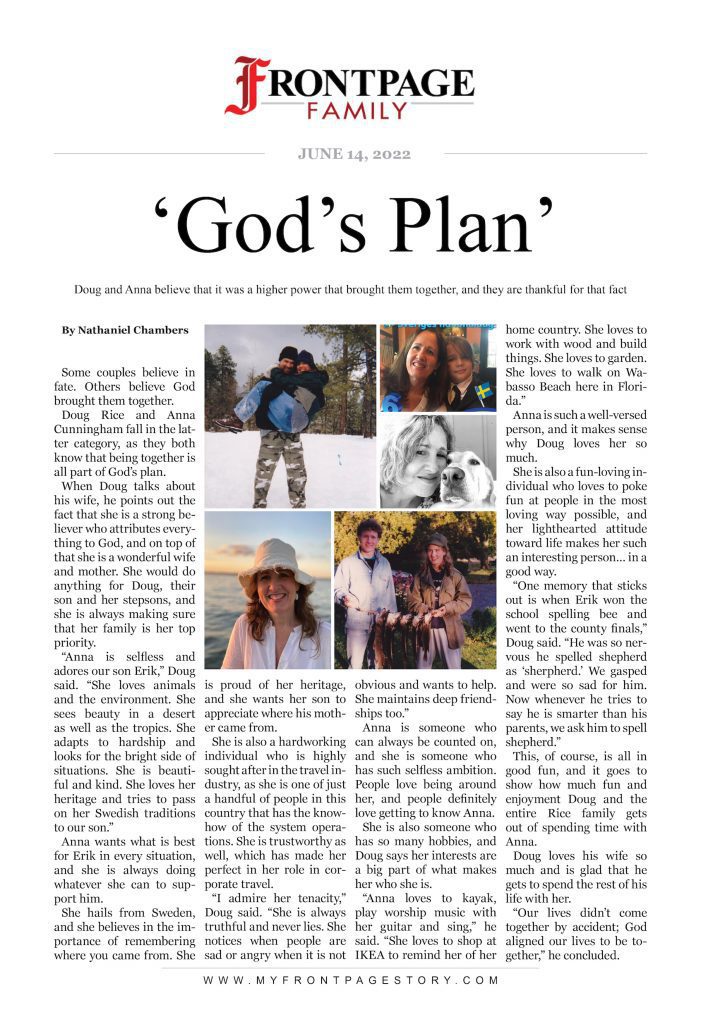