Honesty & Compassion: Demi means so much to Andrew, and he is grateful for her every day

When Demi Eason became the youngest branch manager ever at her bank, it was definitely a sign of things to come.

She has proven time and time again that no matter what she sets her mind to, she can find success in it. Demi is a hardworking individual who is always looking for the next challenge to take on, and she is someone who is truly admired by many people.

One of these people she is admired by happens to be her boyfriend, Andrew, as he is always in awe of the many things his girlfriend is capable of, and he knows that there are no limits to the heights she can soar to.

Demi is also someone who is always looking out for others, and she truly knows how to take care of everybody all around her.

“As a daughter, Demi has taken care of her mother, even at a young age of 19 when her mom moved in with her and Demi provided support,” Andrew said. “Demi does have brothers and sisters, but everything always fell on Demi to take care of everything.”

Demi was up for the task, and that opportunity that fell on her lap at such a young age prepared her and motivated her to get her to where she is at today. She has always been a provider, and she has always been the person who was willing to step up to the plate, and her being a constant in so many people’s lives has made a world of difference to those people.

One of these people that Demi is a constant for is her daughter, Kennedy. Demi has been a solid rock for Kennedy, and she is always loving and nurturing her in any way that she can.

“Demi has always put her daughter first and made sure she had it better than she did when she was a kid,” Andrew said. “Even though Kennedy did not see it or probably appreciate it at times, Demi always made sure she was pushing her academically, socially and athletically.”

Demi also wants what is best for everyone around her as well. She is someone who is going to lift up those around her and help make them better versions of themselves.

Being in the role she is in at work can be a tall task at times, but she knows how to handle it with integrity and with the utmost respect for everyone who works under her. She truly wants to see everyone succeed, and people are better off because they have Demi in their corner.

“Demi is the most accepting and open minded person I have met,” Andrew said. “She is not quick to give out love, but when she does, she loves that person with everything… and you know it is genuine. She puts others ahead of her needs and makes sure everyone is always taken care of. She is also the most honest person I know, which at times can be too honest. She’s very patient too.”

No matter how you put it, the traits Demi possesses help make her one wonderful woman.

Andrew loves every moment he gets to spend with her, from getting her to play hooky from work so they could go to a Tigers game and walk downtown together, to all the family trips they have taken together with the kids. As long as Andrew is with Demi, he is happy.

He is also appreciative of her beyond words, as she helps bring out the best in him.

“Demi has taught me so much about myself and opened my thinking up to see other points of view and look at situations from different angles,” he said. “Being with her makes me want to be a better person.”

Finding Demi was the best thing that ever happened to Andrew, and he is grateful for everything. He cannot wait to see what is in store for them, and he cannot wait to grow old with her.

“I would like her to know how much I really love her and how she has shown me how to love and made me an all-around better person.” – Andrew 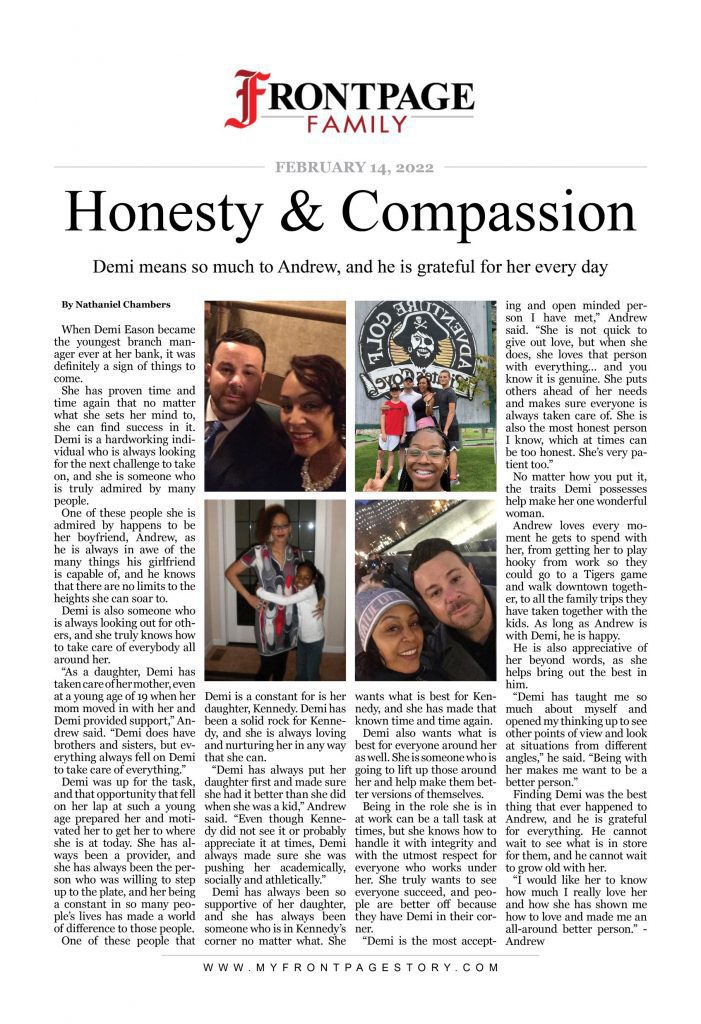