Man Of The People: John Dickson is a leader and a world changer in and around the Redstone Presbyterian community 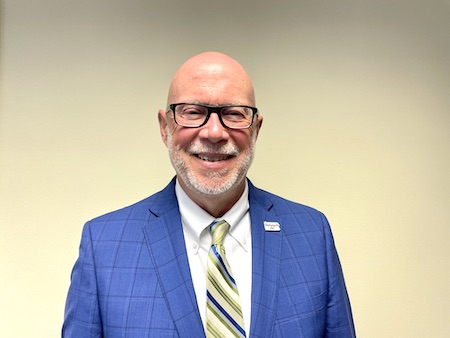 “The Paul P. Haas Lifetime Achievement Award recognizes an individual member who demonstrates excellence in leadership, playing a pivotal role in the overall operations leading to organizational success,” according to LeadingAge PA.

It is the most prestigious Distinguished Service Award given by the organization, and there is no doubt in anybody’s mind that President and CEO of Redstone Presbyterian SeniorCare John Dickson is the deserving recipient. Dickson exemplifies leadership by example, and he is the exact embodiment of what people imagine when they think of a president and CEO of a long-term care community.

Anyone who has worked with or who knows Dickson speaks highly of him, and one of the first things that comes to everybody’s mind is his innovation. Dickson has the special ability to see a problem and find a solution that is going to be beneficial for all parties involved. He has helped make many changes and he has administered new plans that have been pertinent to the growth of the Redstone Presbyterian SeniorCare (RPSC) community.

“I have spent my entire nursing career at Redstone,” RPSC Vice President and Chief Operating Officer Vicki Loucks said. “I well remember the challenging days that we faced prior to our transition in leadership and John’s arrival in 2001. As President and CEO, John was not reluctant to address the financial and morale issues at Redstone. Under his leadership, the organization was stabilized, our employee culture was improved and the stage was set for future growth and development.”

From the moment Dickson stepped foot into the RPSC community, he brought a sense of change, and he was never afraid to speak up. He also has a sense of connection with many government officials, which can help with implementing some of his innovation ideas.

“Under John’s leadership, Redstone has been recognized as a ‘Best Practices’ organization for its innovative employee health insurance plan, which combined a full-scale wellness program to significantly reduce health care costs,” RPSC Vice President for Mission Support Lisa Dormire said. “The Redstone organization, as a result of its wellness initiatives and measurable premium savings, has been recognized as a Healthiest Employer in Western Pennsylvania from 2011 through 2015.”

Health is another area of focus for Dickson, and he has clearly established the epitome of a happy, healthy organization. He has helped take RPSC from a company with low morale and a place that did not have great benefits or health acumens to a place that has become a standard for long-term care communities.

“John has also been an instrumental leader in the Healthcare Council of Western Pennsylvania and previously in the Faith Based Network in our region,” Presbyterian SeniorCare Network President and CEO James Pieffer said. “John is known as a collaborative and dedicated member of these groups. His work on the risk retention program within the Faith Based Network was essential to helping many organizations to provide essential liability coverage at an affordable rate during many times of financial crisis.”

Know someone like Mr. Dickson who has accomplished a lot over the course of their professional career? Allow the writers of My FrontPage Story to give them their deserved face time on the cover of the paper! Check us out today!

Dickson is an advocate for others, especially those who work for him and those who are residents within the RPSC community. He is always looking for ways to help out in ways that benefit everyone.

As mentioned before, Dickson is also someone who is always looking toward the future. He has a knack for seeing where the community is at and where it has a potential of growing, which is why they are such a sought-after senior living provider.

“We had expanded to several campuses [since my start in 1998] and were in need of a true visionary leader to take over from our project manager style leader shortly after I joined the board,” State Representative and Redstone Presbyterian SeniorCare Director Bob Brooks said. “In 2001 the board hired John Dickson as our new president and he quickly grew into the CEO role as our much-needed visionary leader.”

Brooks said that for the last two-plus decades he has had the pleasure of seeing Dickson establish solid governance controls, along with strong fiscal controls, and he is a major reason why the community is far and above in a much better place than it was even 20 years ago.

“As a leader, John invites us to confront challenges head on, explore opportunities for change and prepare for the future, even when this involves risk,” Loucks said. “He is supportive and encouraging, and always engaged as a leader. He shares the limelight and the credit for success with his team, even as he shares the burden of challenges and disappointments. In his decisions and his leadership, his heart is always centered on our employees and residents.”

She said that Dickson’s impact is limitless, and the fact that he is always focused on what is best for his employees and residents makes him the best leader possible for the RPSC community.

Dickson has accomplished many great things and has played his many different roles over the years – such as being a board member for multiple organizations – and he is a great role model for the many employees who will continue to look up to him for years to come. He is a man of the people and the Paul P. Haas award is the culmination of his servant leadership.

“His commitment to seniors having a seamless experience between different types of healthcare providers was and is his primary objective,” said Healthcare Council of Western Pennsylvania President Nick Vizzoca. “His vision is creating pragmatic strategies around customer experience, quality metrics, engaging health plans and flawless patient/resident handoff scenarios.”

Dickson’s number one priority always has been and always will be making sure that his residents have the most comfortable transition and the best possible time at his senior living community, and he is an awesome leader because of it.

Congrats on the award, John. You deserve it! 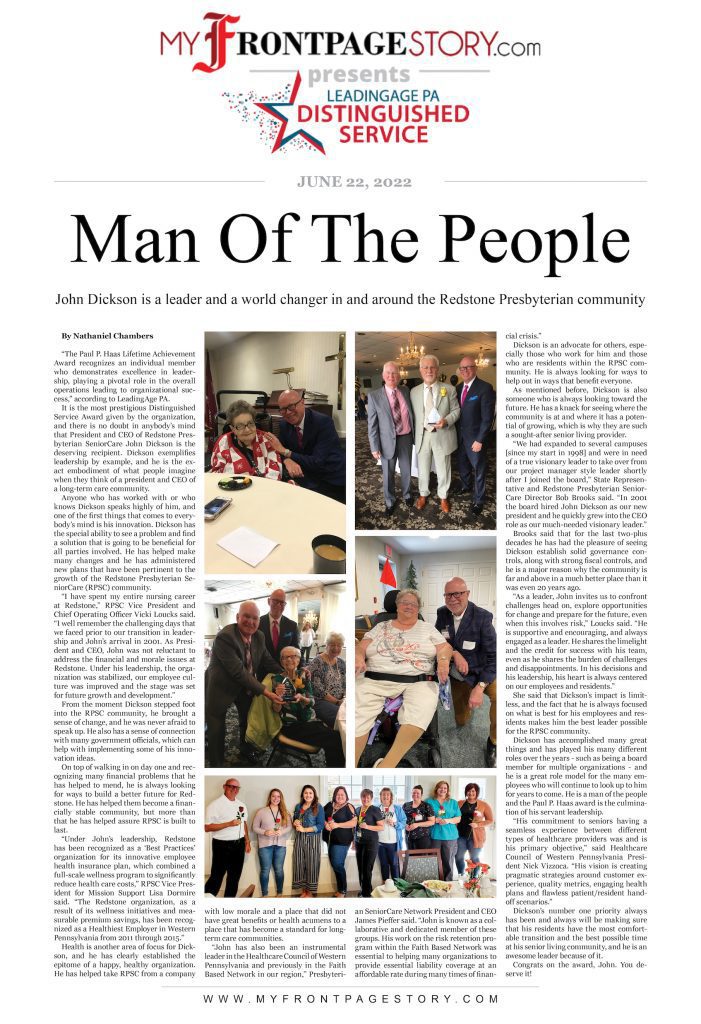