Life Full Of Lessons: At 75-years-young, Ann is still chalk full of knowledge and lessons for everyone to learn from 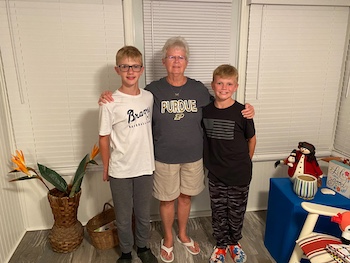 While he may not say it nearly as much as he wishes he would, David George is more than appreciative of his mother, Ann.

From their vacations in Florida and the times she was home during the summer when he and his siblings were younger, to their east coast and west coast baseball stadium trips when David got older, the moments he has spent with his mother are full of memories.

Some memories that David has with his mother are not all fun stories either, but instead are filled with life lessons that he carries with him to this day. One of the memories that has always stuck with him are from when he was playing baseball growing up.

“I was 10-years-old and playing a little league baseball game,” David said. “I made three errors in the field and my mom got up and left and went home. When dad brought me home I asked her why she left. She said she wasn’t going to sit there and watch me keep making mistakes. It wasn’t funny at the time, but now I look back on it and laugh. I was 10! But, I quickly knew mistakes like that were not tolerated.”

What may sound like a harsh story on the surface is actually one that is a great reminder of who Ann is. She is a loving mother who wants what is always best for her children, and she constantly expects the best from everyone all around her.

These high expectations Ann has for her family and everyone else all around her are a direct result of the expectations she has held herself to throughout the years. She never lets anything get to her, and this speaks volumes to her personality.

“She perseveres,” David said. “No hardships get in her way and she doesn’t slow down. She dealt with the sudden death of youngest child, Julie, in 2002, a divorce in 2014 and bouts of arthritis that she has learned to manage with help from doctors. She is as independent and stronger than ever. She is obsessed with the upkeep of her two properties and driving around in her convertible Camaro, just as she did her original 1969 Camaro. She has even been described to me as one of the nicest people ever.”

Ann is the strongest person David has ever known and seeing her get through anything the way she does makes him proud to call her his mom.

She is also a very caring, genuine person who has so much heart for all the people around her. So many people are drawn to Ann based on her personality and the way she truly treats everyone.

“She is genuinely a nice person, though I remember her getting mad at me when I was young many times as a mom,” David said in a lighthearted tone. “She is loyal to her family, even if she’s not happy with some of the decisions we make.”

“She is always supportive regardless of any poor decisions we make,” David added. “She was a parent who had high expectations for our behavior, especially in public, and my sisters Jennifer, Julie and I knew to never get out of line.”

Her children being well-behaved was something that Ann always wanted, and these expectations she had for them when they were younger have helped turn them into strong-willed, independent, cordial adults.

Ann is just someone who loves her family more than anything, and she is always making sure that she shows them what love and loyalty looks like.

David said he has also learned so many great things from his mother, as she has always been a wonderful role model. She has shown him how to be a better person and how to grow into someone who takes after her, and he is grateful for this.

“She taught me how to be a good parent to my kids and that any obstacles you overcome will make you stronger and a better version of yourself,” David said.

There are so many lessons to be had in life and being able to understand them and learn from them is very important. This is something that Ann has always realized, and it is something she has always shown her family.

Ann is loved by many people, especially her own family, and the people in her life are glad that they have the opportunity to know her. She is so strong-willed and can get through anything, and she is truly a role model to many.

“Even though we don’t say it much, my boys and I do love her and always want her to be happy doing what she does.” – David