When Steven talks about his wife, Tasha, he cannot speak enough to how strong and amazing he thinks she is.

From the moment Steven met Tasha, he always had a different sense about her, and he is glad that he hit the nail on the head. He could not imagine his life being any better than it is now, and that is all thanks to his loving wife.

“She means everything to me,” Steven said. “She is the mother of my kids and the person I get to spend the rest of my life with. You don’t choose your kids, but you do choose your spouse.”

This point that Steven made shows exactly what he thinks of his wife. They chose to be with one another, and he is very grateful for it.

Throughout the years of being together, he has also had the privilege of learning many things from Tasha, and he knows he is a much better person because of these things.

“She has taught me patience,” Steven said. “I am also trying to be more understanding. I do not get as angry as I used to, either. There’s just a whole bunch of things I have learned over the years.”

Steven has also learned how to truly treat people by seeing the way his wife is with all those around her. She is a kind and compassionate soul, and she is also someone who can be relied upon by so many people.

“There’s always that one horse who is calming and relaxing,” Steven said. “That’s her. She takes on so much herself. It’s like waking up on a Sunday morning and putting on a pair of slippers. She makes it easy.”

Tasha makes life easy for all those around her, but there are four specific people she makes life infinitely easier and better for that have not been mentioned yet. Tasha would not be who she is today if it were not for the opportunity to raise her kids – Trinity, William, Skye and Arlo – with an exuberant amount of love. Steven is so grateful to see the bond and relationship she has with each of them, and each bond is special and unique in its own way.

“The kids love her unconditionally, and she loves them the same way,” Steven said. “Her anger never gets her on anything. She is not a fierce woman by any means, but if I had to get between her and her kids, I’d be terrified.”

Tasha has that mama bear mentality, and this is something that truly sets her apart from so many other moms. She is always there for them, no matter the time of day and no matter what is going on.

Her kids have a 15-year range from youngest to oldest, but Tasha makes the transition from showing her 18-year-old love to showing her 3-year-old love so seamless, and it is something that they all are very appreciative of with her.

For Tasha, there is nothing that is more important than her kids, and she is someone who just has a great big heart for all four of them.

She is also a great role model and someone who shows them what it is like to not get rattled by anything, and with that comes a lot of life lessons Trinity, William, Skye and Arlo learn from on a daily basis.

“Her patience and her unending love for her children reflect who they are shaping into,” Steven said.

Steven knows their children have the opportunity to grow into amazing men and women because of who their mother is, and he trusts that they will do just that. They spent so much time together as a family, and he hopes that this will help pay dividends in the long run.

“Everything we do with the kids is what I love the most,” Steven said.

Being a mother is exactly what Tasha was meant to be, and she wears that sleeve loud and proud.

Everything Tasha does and everything she stands for makes Steven excited to call her his wife each and every day, and he is blown away by her intelligence and her personality constantly.

“She is quick as a wit and has a lot of intellect,” Steven said. “She has some of the better common sense I have ever seen.”

There is nothing Tasha is incapable of, and Steven knows he is lucky that he landed such a perfect woman.

Steven and the kids are grateful and thankful for Tasha, and they love her more than anything.

“Tasha, I will always be your biggest supporter.” – Steven 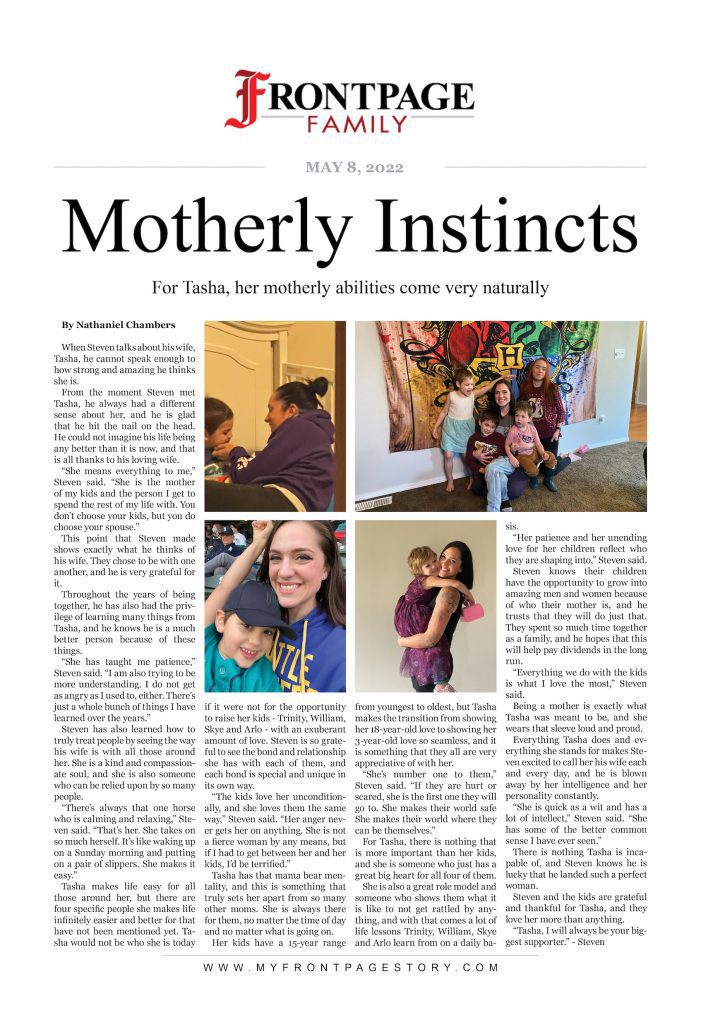