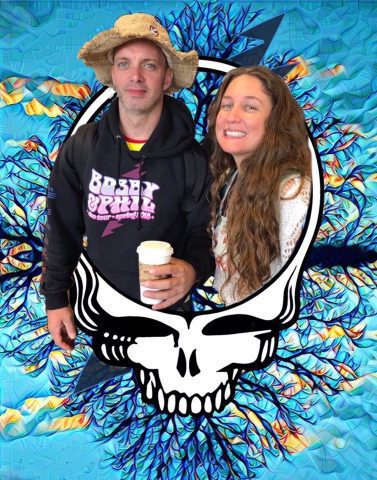 Mike likes to tell his girlfriend, Lisa, that she had him at “Frodo.” He just didn’t see it at first.

Mike remembers being struck by Lisa’s first message to him through OkCupid, and he wondered how a woman he had never met could have such nerve. Turns out, Mike had the right movie, but the wrong “Precious.”

“She messages me ‘Frodo,’” Mike said. “I’m thinking it’s that Gollum dude. I was like, ‘Can you believe this girl? She called me Frodo. I don’t look like that guy.’”

Lisa thought Mike looked like Elijah Wood, so calling him Frodo was actually a nice compliment. Once Mike got it, he calmed down, clicked through Lisa’s profile, and was instantly blown away. He saw a free-spirited woman who was adventurous and loved to surf, and he felt something for her that he couldn’t fully explain.

That feeling was blind at first, and it was all set up by a “thirsty” friend who turned him on to OkCupid. Mike wasn’t looking for a relationship at the time, but Lisa found him and got his attention for all the right reasons. Before Mike even saw a picture, he was hooked.

“She said, ‘Aren’t you curious to see a picture?’” Mike said. “I said, ‘I don’t even care what you look like at this point.’ Then she sent me pictures, and I was like, ‘Are you kidding me?’ I wasn’t looking for the prom queen, but I kind of found it anyway.”

Lisa has proven Mike’s instinct right over and over again in the four years they’ve since been together. She is a hardworking executive in the insurance industry, but she is relaxed and goes with the flow in her free time.

Mike loves the two very different sides to Lisa, and he finds that her cool, patient demeanor helps to balance him out.

Mike says he is now convinced he can tell the queen of diamonds by the way she shines, and he sees a woman who constantly puts others’ needs before her own. But what he might love more than anything else is the way Lisa treats his daughter, Danni.

“She is extremely close with my daughter,” Mike said. “It’s awesome. It’s one of the most beautiful things I’ve witnessed. I want my child and my significant other to be close, and they are.”

The way Lisa’s longtime friend, Kristin, tells it, the relationship Lisa has with Danni should come as no surprise. The two women go all the way back to fifth grade, and Kristin has always seen Lisa as a friend who was there for her and invested herself in others.

In Kristin’s eyes, there could be no better friend than one who conveys warmth the way Lisa does. It’s easy to be in her company, Kristin says, because her default position is to always listen and support.

“She’s definitely really considerate,” Kristin said. “She is very thoughtful and she’s got like an intuition about people. She has a way of really understanding people, and she really does care about her friends and her family. She is the most caring friend I have, for sure.”

Mike has felt that from Lisa from the very beginning, but even more so now as she shares his interest in The Grateful Dead and she makes incredible works of art that she either gives away or donates the proceeds. It’s another case where Lisa’s beauty, Mike says, shines from the inside out.

Lisa makes their relationship feel easy, just as she does with her friendships. No matter what’s happening in their lives, Kristin says her friendship with Lisa is still comfortable and meaningful and she wouldn’t trade it for the world.

“Friendship for me and Lisa is a muscle memory,” Kristin said. “No matter how much time has passed, no matter how much we may have changed over the years – college, relationships, children, careers — our friendship is easy to slip back on, like a pair of worn-in jeans. She always accepts me where I am and for who I am.”

Life hasn’t always been easy for Mike, but he sincerely believes that everything that’s happened, for better or worse, was meant to lead him to this point. Lisa is the woman who makes him better just by being in the same room as him, by helping him be more patient, and by loving Danni as if she were her own daughter.

For that, Mike feels grateful and excited for a future where he’ll always be Lisa’s Frodo.

“She’s not just the woman I can live with, she’s the one I can’t live without,” Mike said. “She’s irreplaceable to me. She’s more than my girlfriend. I consider her my legit best friend and my partner in time.” 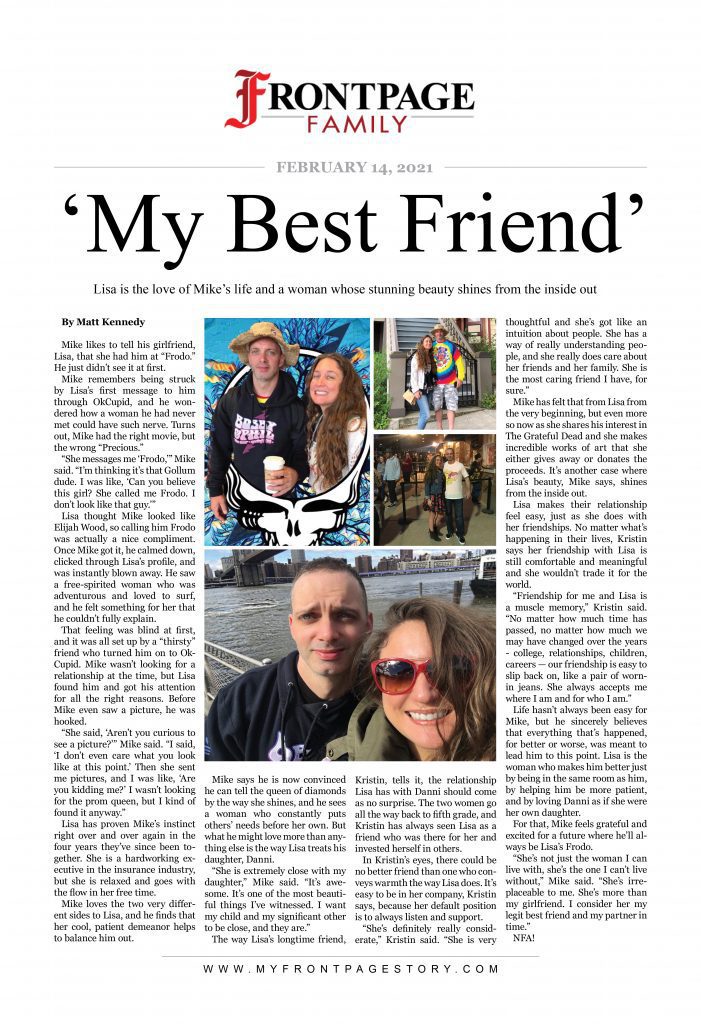