‘Open Heart’: Karyn Mitchell loves everyone like they are her own 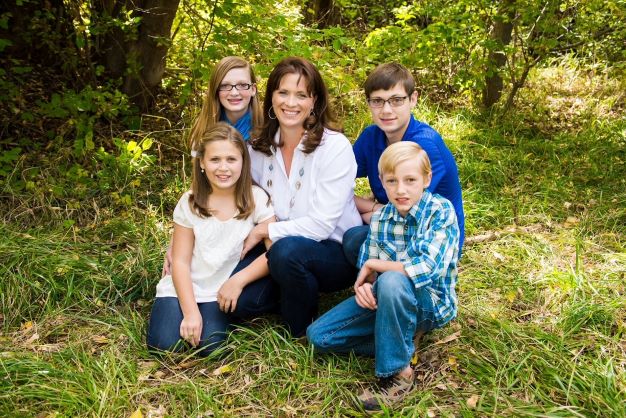 These are the words consistently used by her husband Buddy, son Joseph, and the director of operations for the family business Kyle Giddings.

If one person says something like that, especially a family member, you might think they are just looking at their spouse or mother thru rose colored glasses.  When everyone is saying that?  Well, then you know it’s the real deal.

“She’s a tireless worker at our business.  She’s in a field where it’s male-dominated and she’s proving to everybody that women can do it better,” said Buddy, her husband of 30 years.

“What I admire most about Karyn is her unmatched work ethic,” echoed Kyle.

“When deadlines are coming down to the wire, she always steps up to make sure the team is united and things are going off without a hitch.”

Karyn’s ability to “make sure the team is united” in every aspect of her life may well be her most defining characteristic.

It started growing up as one of ten (10!) kids that Fred and Karleen Dewey had and even amidst the natural chaos of a family that big, Karyn was often a stabilizing force.

That has carried over to her own family now as she is the rock that Joseph, Abigail, Jonathan, and Anna Grace lean on time and time again.

“She always has good advice even when you don’t want to hear it,” said Joseph.

“She loves fiercely and can be a real mama bear.  She’ll stand up for you even when you don’t really deserve it.”

There’s that loyalty and selflessness again.

There is simply no better example of that selflessness, of putting others needs above her own, than her role as COO of Simply Floors.

You see, Karyn’s chosen vocation was in physical therapy where she even had gone as far to have gotten a masters degree in that field.  But once she realized that the family would do better if she ran the company there was no hesitation.  Mama bear had to do what was best for her cubs.  As usual.

“She totally runs our family business,” said Buddy, “Without her the business wouldn’t be anything.”

Truth be told, as both a couple and in business Buddy and Karyn are simply a perfect match.

“You know how it will be a huge storm, and you look out the window and there is a bird just using all the wind from the storm to glide gently and peacefully in the storm? Well, Buddy is the storm and Karyn is the bird. Buddy is always moving at 100 miles an hour, with new ideas and plans for the business. Where Karyn is the one that takes those ideas and makes them make sense and uses some of them to improve the business and their life in general.  Without the wind, the bird couldn’t find peace. Without the bird, the wind would have been useless.”

Joseph sees the same thing when he looks at his parents and talks about what has made it work so well for 30 years.

“My dad has the ideas and my mom has the details. Without my dad my mom would be stuck in the minutiae, worrying about the small things. Without my mom my dad would be in the clouds, following one big idea after another and getting distracted. But together they make a great team, able to synthesize my Dad’s dreams with my Mom’s pragmatism.”

Buddy’s big ideas that were perhaps lacking some detail started from the very beginning. When Karyn was 15, Buddy approached her and told her that he was going to take her out on a date when she turned 16.

There was only one small problem; Buddy didn’t know when her birthday was!

Thanks goodness Karyn’s best friend Michelle, perhaps at Karyn’s prompting, was able to let Buddy in on that pretty important detail.  The rest, as they say, is history but also a great metaphor for their entire relationship.

“She’s really smart and very beautiful but I would say the most amazing thing about her is her incredible honestly and loyalty,” said Buddy.

“When people meet us, most are shocked that someone as beautiful as her can be as smart as she is.”

While all these traits are wonderful the more you hear about Karyn the more you realize her secret sauce is really quite simple; it’s the way she makes people feel about themselves.

“She has this overwhelming desire to make sure we all feel like we are succeeding,” said Kyle.

“That’s what makes her who she is.”

One way in which she does that is by always having her employees backs if customers are talking down to them.  That’s a characteristic she has always exhibited in her family life as well.

“By always standing up for us she showed us we can stand up for ourselves.  Mom has taught us self sufficiency and frugality.  She’s always a voice of pragmatism, never doubt,” commented Joseph.

Another way is by working tirelessly to develop procedures that allow the employees to know exactly how to handle every situation.  Those things take time and attention to detail.  Again, that has manifested itself a number of times in her family life, including on Joseph’s favorite trip to Belize.

“She found so many cool things for us to do, from the ATM caves to the Mayan ruins we saw.  The whole trip was a blast, and it was all thanks to her planning and foresight.”

It really is wild how Karyn’s strengths cross over seemingly back and forth between the business and her family but it’s true.

So true, that Buddy wanted to do something extra special for her this Christmas.  He wanted to give her a story that was written all about her so that she would know exactly how people from every important aspect of her life felt about her.

“While we aren’t always good at being vocal about it, she is appreciated more than words could ever proclaim,” said Kyle.

“She has seen us all through storms not only professionally but personally as well and she will always be the person we all look to to steady the ship.”

Joseph agreed, adding, “I want her to know I will always love her.  And that I highly value her wisdom, even when I don’t agree with it.”

“Even though she feels unappreciated for her work everybody knows that it’s her that makes everything run,” said Buddy.

“She’s been my wife of 30 years and she’s still way out of my league!” 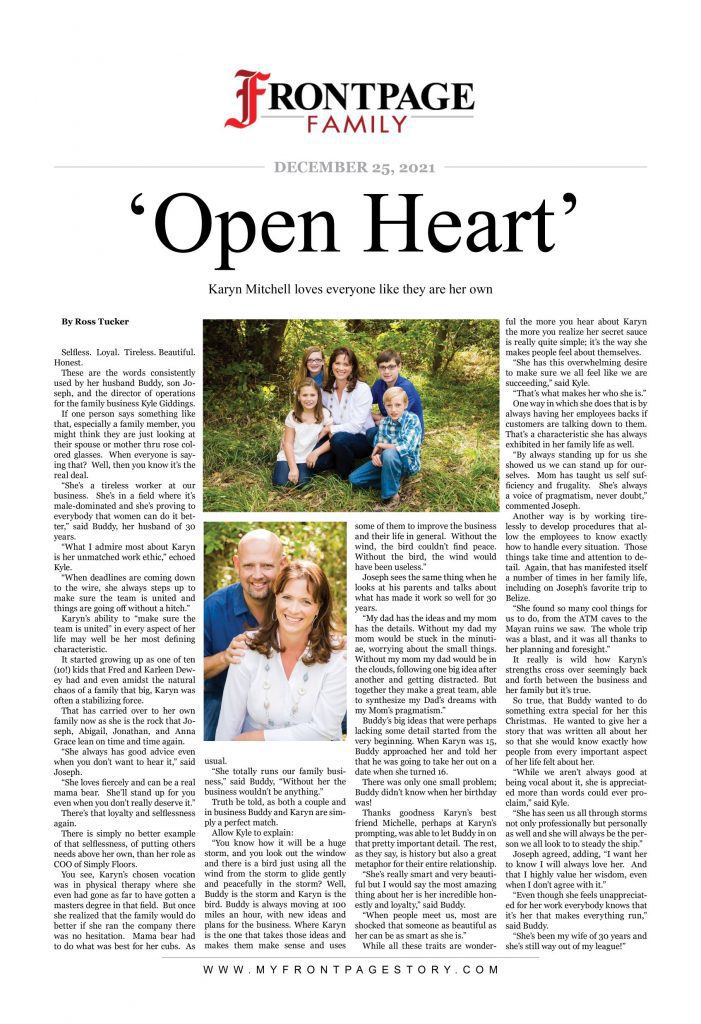