James Coddington is the latter, and his family admires him for all the hard work he has put into creating a mini grocery store empire for the last 38 years.

What started as Jim’s Northeast United Super, and grew into a few Piggly Wiggly franchises, Raytown Thriftway, Shawnee Sunfresh & Ottawa Sunfresh is concluding today with the sale of  Sterling Apple Market and Buckner Thriftway.  He is finally stepping down from the ranks of ownership, and deservedly so.

“Jim is the hardest working man I know,” his wife, Audry, said. “He knows the grocery business inside and out. He has always been about giving the customer a good value and the best customer service. He would never ask an employee to do something he wouldn’t do himself.”

Jim started bagging groceries as a teenager at the local Schunck’s in Independence, MO. He worked his way up the chain of command at various stores around Kansas City before deciding to purchase  his own business a decade later.

He has put a lot of blood, sweat and tears into building his business, and he is an owner that people truly enjoyed working for. He was not afraid to get his hands dirty when duty called, and he has always valued customer service above all else.

“He’s always got your back,” his son, Brad, added.

Whether he is at work or at home, James is someone who has always made sure to help people out when they are in need.

“He’s always been someone we can look up to or turn to for advice when in a difficult situation,” his son, Brian, said.

This became especially apparent and important when he was running a business, because he was never going to leave anybody high and dry.

“With no family legacy in the grocery business or even general-business sense in the family  to rely upon, he set out and bought his first store at the age of 27 in 1984 in Northeast Kansas City,” James’ sons said. “In the beginning, each week brought another opportunity to admit defeat and fold up shop, but he outworked and networked his way to success in the first decade.” He truly built his business on sheer force of will and determination while striving to give his customers and employees what they needed.” 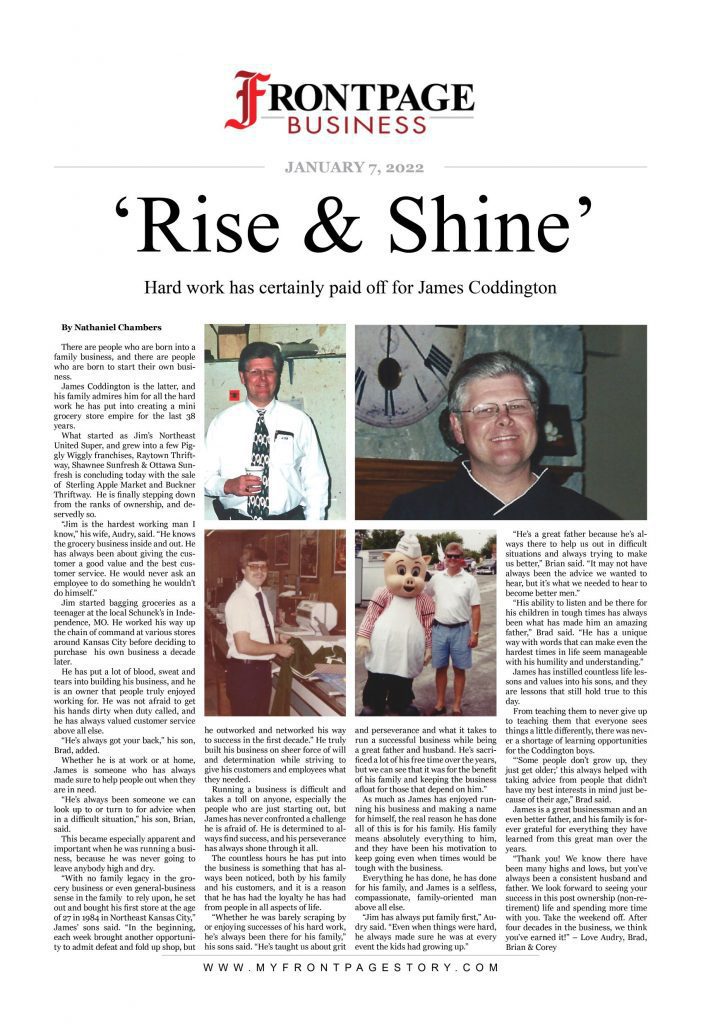 Running a business is difficult and takes a toll on anyone, especially the people who are just starting out, but James has never confronted a challenge he is afraid of. He is determined to always find success, and his perseverance has always shone through it all.

The countless hours he has put into the business is something that has always been noticed, both by his family and his customers, and it is a reason that he has had the loyalty he has had from people in all aspects of life.

“Whether he was barely scraping by or enjoying successes of his hard work, he’s always been there for his family,” his sons said. “He’s taught us about grit and perseverance and what it takes to run a successful business while being a great father and husband. He’s sacrificed a lot of his free time over the years, but we can see that it was for the benefit of his family and keeping the business afloat for those that depend on him.”

As much as James has enjoyed running his business and making a name for himself, the real reason he has done all of this is for his family. His family means absolutely everything to him, and they have been his motivation to keep going even when times would be tough with the business.

Everything he has done, he has done for his family, and James is a selfless, compassionate, family-oriented man above all else.

“Jim has always put family first,” Audry said. “Even when things were hard, he always made sure he was at every event the kids had growing up.”

“He’s a great father because he’s always there to help us out in difficult situations and always trying to make us better,” Brian said. “It may not have always been the advice we wanted to hear, but it’s what we needed to hear to become better men.”

“His ability to listen and be there for his children in tough times has always been what has made him an amazing father,” Brad said. “He has a unique way with words that can make even the hardest times in life seem manageable with his humility and understanding.”

James has instilled countless life lessons and values into his sons, and they are lessons that still hold true to this day.

From teaching them to never give up to teaching them that everyone sees things a little differently, there was never a shortage of learning opportunities for the Coddington boys.

“‘Some people don’t grow up, they just get older;’ this always helped with taking advice from people that didn’t have my best interests in mind just because of their age,” Brad said.

James is a great businessman and an even better father, and his family is forever grateful for everything they have learned from this great man over the years.

“Thank you! We know there have been many highs and lows, but you’ve always been a consistent husband and father. We look forward to seeing your success in this post ownership (non-retirement) life and spending more time with you. Take the weekend off. After four decades in the business, we think you’ve earned it!” – Love Audry, Brad, Brian & Corey