‘She Said YES’: Maureen McQuillan has made Charlie the happiest he has ever been with her faith, love and friendship 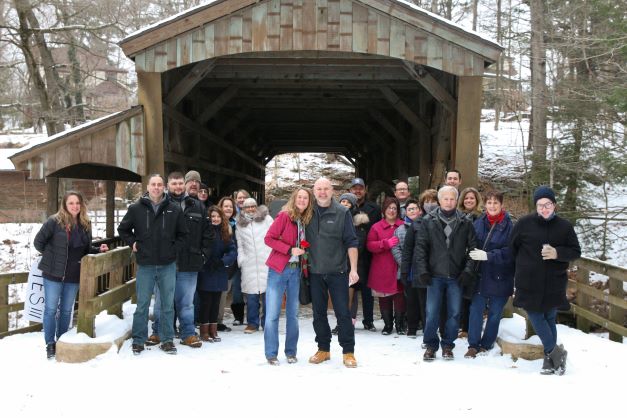 Charlie and Maureen McQuillan’s unique love story featured two major milestones where they had to endure through either heavy rains or frigid temperatures. And while it was no question that their love for each other would never be derailed by some minor inconveniences, the fact that those challenges turned into beautiful memories says a lot about this faithful couple.

First, there was an Aug. 28 first date where all of Charlie’s outdoor plans had to be scrapped because of heavy rains. All was well because they ended up at the covered bridge in Mill Creek Park, which has since become their “spot,” followed by dinner at the Croatian Club and dancing.

Rain couldn’t have possibly changed the fact that something special was brewing.

“We both knew when we parted that night that we were supposed to be together,” Charlie said.

The trouble there was that snow was on the ground and the thermometer read 15 degrees, which called for all of them, Charlie included, to persevere through the plan. It all went off without a hitch, thankfully. Maureen said yes, and family and friends were there to cheer them onto life’s next great chapter. It wasn’t exactly how Charlie drew it up, but he was thrilled beyond the belief to be making a lifelong commitment.

That was one year ago today.

All of this goes to suggest that God has been working to bring these two together from Day 1, but maybe He had a little fun with them along the way.

Charlie and Maureen have shown through those early moments and beyond that what they have is special and that any such obstacles, no matter how big or small, could stand between them.

“I have NEVER felt a love like this, and I have never loved someone like Maureen,” Charlie said. “We had so many signs when we were dating. Some of the craziest things would happen all the time. After a while, we started to label them as ‘God winks,’ signs that God was aligning us together.”

The very comfort they have always felt around each other was perhaps the first big sign. Charlie and Maureen were “swooped away” by their bold love, their shared faith and instant chemistry. That process began when Charlie was looking into an assisted living facility for his mother and came across the facility where Maureen worked as activities director. There was a comfort in the building that inspired Charlie to volunteer there so he could spend more time with his mom.

It was through that volunteer duty that Maureen “put him to work” with Bingo, card games, picnics and other activities. She ultimately left that position, but Charlie reconnected with her at a funeral for one of her former residents. They started texting after that and met as friends for a picnic in Boardman Park, which led them to Mill Creek Park, a midnight stroll, and their first kiss.

The rest became history, and Charlie’s admiration for Maureen has continued to grow with each passing day. The way he tells it, she makes that admiration very easy.

“Maureen is the most giving person on this planet,” Charlie said. “She does so much for everyone and her family. She is the most kind, caring, loving, faith-driven soul I know. Maureen and I are very strong faith companions and really feel like God has put us together to accomplish something wonderful.”

Charlie simply can’t wait to move into the future and find out all the things that he and Maureen can accomplish together. Being with her has made him the happiest he has been in his life, which he says is apparent to everyone who knows them.

They love to do everything together and spend as much time in each other’s company as they possibly can. Unique and beautiful already, Charlie is excited by the fact that the love story for these best friends and soulmates is still being authored one amazing day at a time.

“Love is the greatest gift God has given us,” Charlie said. “Maureen and I always want to show everybody how much we’re in love with each other all the time. It’s not something fake or produced. It just pours out of both of us when we’re together and everybody sees it. Lead by example is our motto.”

Maureen, I pick you. Will you pick me? She Said YES! 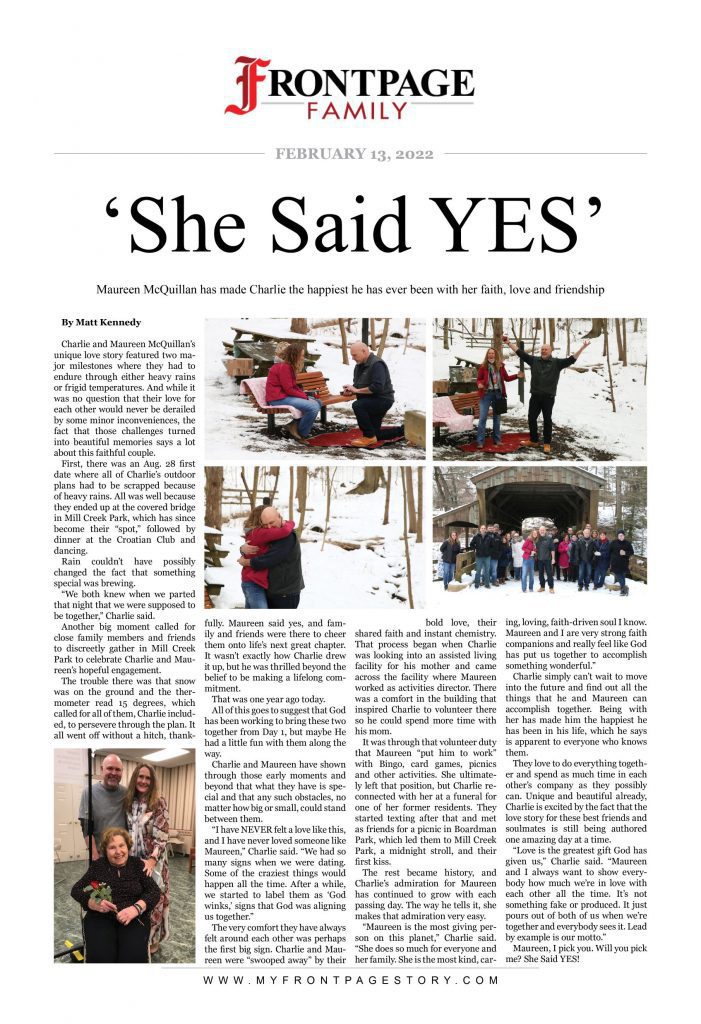