The Best There Is: Diana has made Michael’s life infinitely better from the moment she walked into it

Diana does not take her relationships with other people lightly.

Hailing from Tijuana, Diana is someone who makes her friendships and relationships last, and she is someone who is always going to be there for other people.

From the moment she and her boyfriend, Michael, first met, he saw something different in her and realized that she was a woman that was worth pursuing. He took a shot in the dark when he asked her out, but that wound up being the best decision he would ever make.

“The first time I met Diana I saw her walking alone on the beach, she looked unhappy for some reason,” Michael said. “Not knowing what her plans were, I watched as she waded in knee deep water walking along the shore. When I actually had a chance to speak to her, I told her I’m going to have a slice of pizza and a beer at Luigi’s and that she’s welcome to come along if she’d like. That’s how our relationship got started.”

Sometimes taking a chance is all you need to do to find the girl of your dreams, as that is exactly what Michael did.

Now, five years later, he gets to reflect on the best half decade of his life. He cannot imagine having spent the last five years with anyone other than the most amazing woman in the world, and he cannot wait to spend the rest of his life with her either.

Diana has such an amazing personality and she means the absolute world to Michael. She has a heart of gold and she is a very selfless individual.

“Diana is a beautiful woman with a great heart for others,” Michael said. “She loves her family and friends, her daughters Brianna and Samarah, her son Saul and her best friend MaryEllen. Diana brings happiness and love to everyone that comes in contact with her. If Diana is your friend, you have a friend for life.”

“Diana has a special way about herself that brings joy and happiness,” Michael said. “She loves to cook for her family. On holidays she works so hard preparing Thanksgiving Day and Christmas Day meals and always does it to make sure everyone is happy.”

Diana already has a keen sense of optimism and is someone who is a generally happy person, but she becomes exceedingly happier when all those around her have a smile on her face. She shows so much self-sacrifice to make sure people are taken care of, and she is truly appreciated for all she does.

She is also someone who would do absolutely anything for her children, and she is always putting an emphasis on making sure they come before anything or anyone else.

“There’s nothing she wouldn’t do to ensure the happiness and well-being of her children,” Michael said. “Diana is a wonderful mother, even though she doesn’t always think that she is”

Her kids could not imagine a better role model and someone to look up to every single day of their lives. Diana is the best mom in the world, and her love is always exuding.

Time spent with Diana is time well spent, and Michael constantly cherishes all the moments he gets to spend with his girlfriend. Whether they are out and about or sitting at home together, as long as he is with her, he is happy.

“We enjoy going out for walks in Ocean Beach on the pier,” he said. “Walking around, taking in all the beauty of the beach. We like going out to eat sushi at Niban, and just staying at home watching a movie on Netflix is fun too.”

Michael knows how blessed he is to have such a wonderful woman by his side, and he knows that she will always have his back.

They are always going to be there for each other, and he cannot wait to see what the future holds in store for them. Diana is an amazing woman, and he wants to remind her of that daily.

He loves her and wants to remind her how beautiful, smart and awesome she is. Diana brings him so much joy, and she is a one-of-a-kind woman and the greatest catch of them all.

He is grateful as well that Brianna and Samarah opened their hearts to allow Michael into their family, and he cares so much about all three of them.

“We’ve been together five years now, Sweetheart,” he said. “It’s been a great journey with you. I hope I haven’t disappointed you in any way. I know there’s been some crazy things that have happened, some ups and downs, but I want you to know that I love you from the bottom of my heart. Happy Birthday, Sweetheart! Hugs and kisses!” 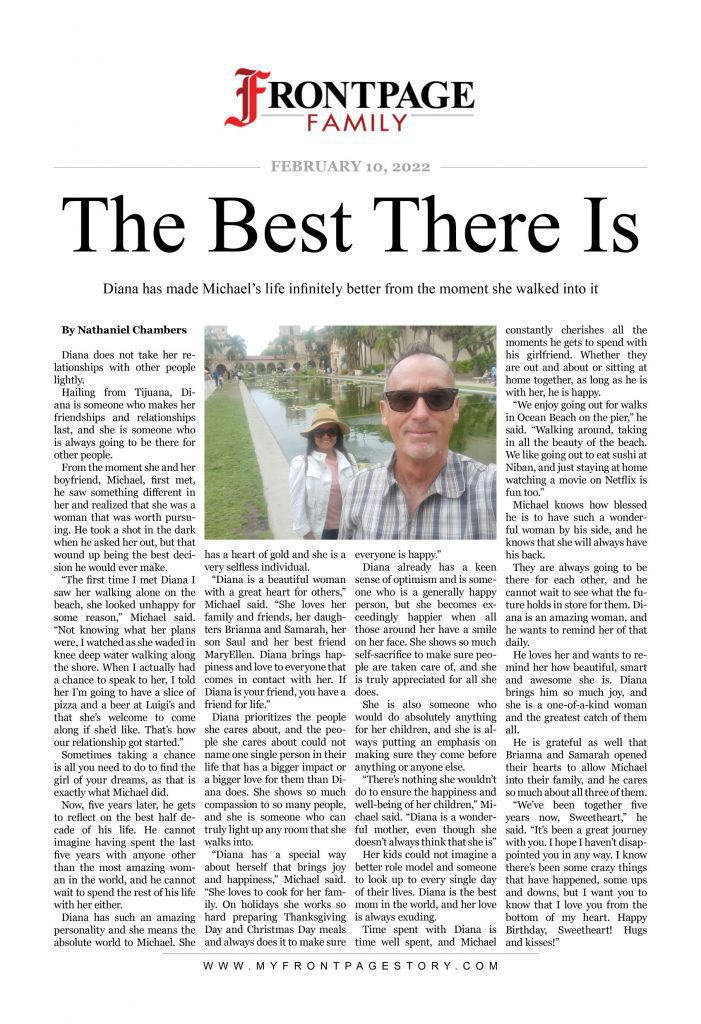