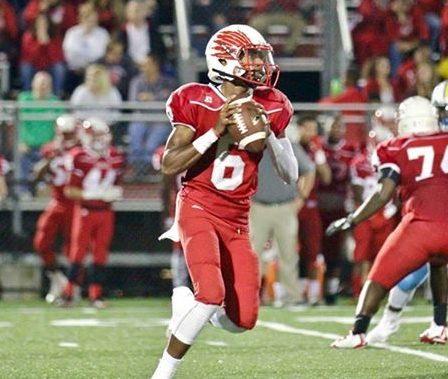 To call Smyrna (Del.) quarterback Isaiah Wilson V a “dual-threat” is to sell him short.

His arm and legs are impressive of course, but they are just the beginning. The reality is, Wilson poses a threat in so many more ways when he steps on the field.

Wilson is comfortable inside the pocket and out, on designed passes and designed runs. He can push the ball down the field or put it on a dime on timing routes.

Wilson beats defenses just as often with his mind as he does with physical skills, which is often the product of hard work off the field.

Wilson has the ability to play hero ball, but he recognizes the value of his teammates and builds them up. He has the “it” factor to rally and elevate them, his coaches say.

“He has some things you can’t teach,” Smyrna coach Mike Judy said. “He’s got tremendous athleticism. He might be the most athletic guy on our team. He’s fast. He’s quick. He’s smart. He’s super explosive. He’s got good arm strength and good accuracy. He could do anything a quarterback would need to do.

“He is a super, super impressive kid.”

Wilson’s arm, legs, mind, leadership and playbook mastery all added up to a Delaware state championship his senior season at Smyrna, a 21-2 record in his final two high school seasons, 7,700 total career yards and 62 touchdowns.

All of those skills came together and made the game look easy for Wilson and a Smyrna team that won its third straight Delaware state title. His talents also earned Wilson a full ride to Norfolk State University.

Wilson credits countless hours of prep for his ability to play fast on the field. That work was fueled by an intense desire to avoid any situation where losing could occur.

“I hate losing,” Wilson said. “I do everything I can to make sure I’m prepared during games and won’t be put in a position where I can lose. I prepare way before games so that during game situations, if something unexpected were to happen, I know how to handle it.”

Wilson was a three-year starter at Glasgow High School before moving to Smyrna for his senior season. He put a bow on his Glasgow career by leading the Dragons to the first perfect regular season record (10-0) in school history.

“It was great,” Wilson said. “We left our own little legacy even though we didn’t win a championship. We will always be the first undefeated Glasgow team.”

Wilson then took on the monumental task of transferring and trying to find his footing in a new program. Smyrna wasn’t just any program, either.

The Eagles won back-to-back Delaware state titles before Wilson arrived. But he put his head down, learned the offense, got to know his teammates and emerged quickly as an impact player and leader, offensive coordinator Mike Marks said.

“That takes a pretty impressive kid,” Marks said. “Not only did he come in and make adjustments very quickly, but he was able to establish himself as a leader in a very short period of time. He turned himself into a kid that the young kids really rallied around and took lessons from because he is a very, very good leader.

“He has strong leadership ability by nature, so you got kind of the best of both worlds. You got one of the best athletes who is also one of the best leaders. You saw a lot of kids really buy in to Isaiah and buy into what Isaiah represented as a teammate, and that’s pretty powerful when you’re bringing a kid in from the outside.” 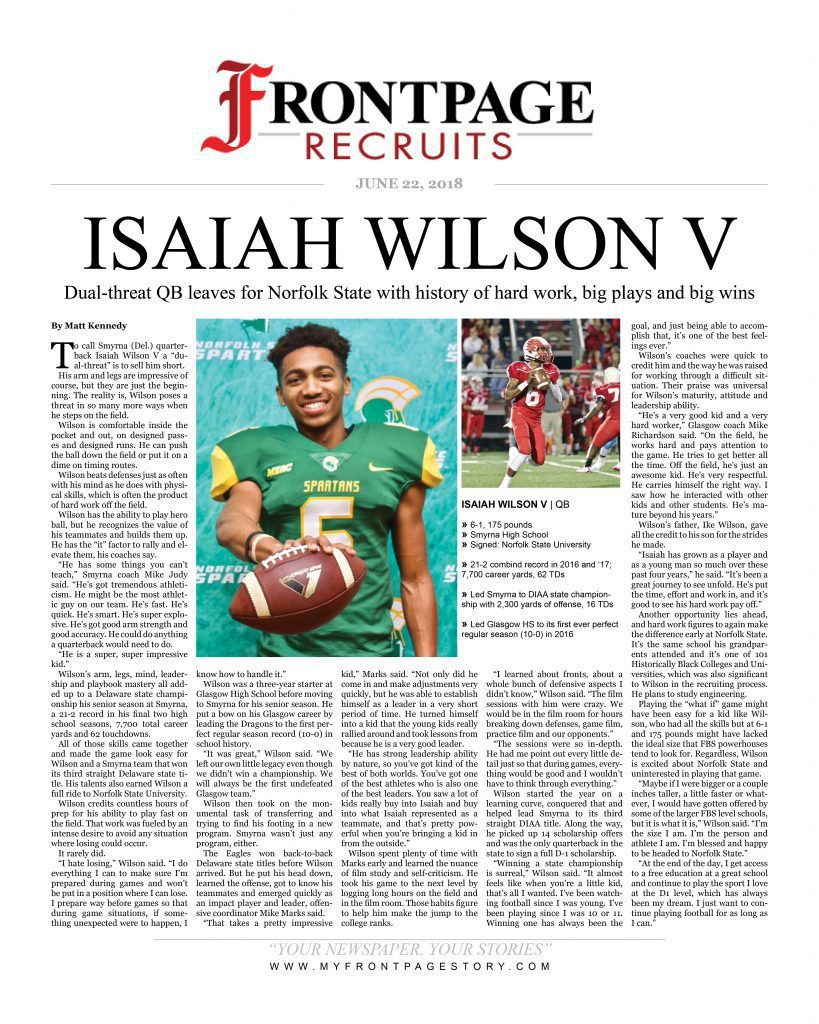 Wilson spent plenty of time with Marks early and learned the nuance of film study and self-criticism. He took his game to the next level by logging long hours on the field and in the film room. Those habits figure to help him make the jump to the college ranks.

“I learned about fronts, about a whole bunch of defensive aspects I didn’t know,” Wilson said. “The film sessions with him were crazy. We would be in the film room for hours breaking down defenses, game film, practice film and our opponents.”

“The sessions were so in depth. He had me point out every little detail just so that during games, everything would be good and I wouldn’t have to think through everything.”

Wilson started the year on a learning curve, conquered that and helped lead Smyrna to its third straight DIAA championship. Along the way, he picked up 14 scholarship offers and was the only quarterback in the state to sign a full Division 1 scholarship.

“Winning a state championship is surreal,” Wilson said. “It almost feels like when you’re a little kid, that’s all I wanted. I’ve been watching football since I was young. I’ve been playing since I was 10 or 11. Winning one has always been the goal, and just being able to accomplish that, it’s one of the best feelings ever.”

Wilson’s coaches were quick to credit him and the way he was raised for working through a difficult situation. Their praise was universal for Wilson’s maturity, attitude and leadership ability.

“He’s a very good kid and a very hard worker,” Glasgow coach Mike Richardson said. “On the field, he works hard and pays attention to the game. He tries to get better all the time. Off the field, he’s just an awesome kid. He’s very respectful. He carries himself the right way. I saw how he interacted with other kids and other students. He’s mature beyond his years.”

Wilson’s father, Ike Wilson, heaped all the praise his son for the strides he has made.

“Isaiah has grown as a player and as a young man so much over these past four years,” he said. “It’s been a great journey to see unfold. He’s put the time, effort and work in, and it’s good to see his hard work has paid off.”

Another opportunity lies ahead, and hard work figures to again make the difference early in his career at Norfolk State. It’s the same school his grandparents attended and it’s one of 101 Historically Black Colleges and Universities, which was also significant to Wilson. He plans to study engineering.

Playing the “what if” game might have been easy for a kid like Wilson, who had all the skills but at 6-1 and 175 pounds might have lacked the ideal size that larger FBS powerhouses tend to look for. Regardless, Wilson is excited about Norfolk State and uninterested in playing that game.”

“Maybe if I were bigger or a couple inches taller, a little faster or whatever, I would have gotten offered by some of the larger FBS level schools, but it is what it is,” Wilson said. “I’m the size I am. I’m the person and athlete I am. I’m very blessed and happy to be headed to Norfolk State.”

“At the end of the day, I get to get a free education at a great school and continue to play the sport I love at the D1 level, which has always been my dream. I just want to continue playing football for as long as I can.”