Temple commit Jordan Magee is a triple threat as a quarterback, safety and student

When Jordan Magee drops back to pass, he sees everything as it unfolds.

The 6-3, 205-pound senior from Dover (Del.) High School knows his receivers’ routes and understands how to read the clues a defense gives him.

Those are skills Magee plans to take with him to the next level. Just not as a quarterback.

Magee is committed to Temple as a hybrid safety/linebacker, but has offers from Delaware State and Morgan State and is starting to hear more often from Ivy League schools, Delaware and Virginia Tech, among others.

Temple was the first to offer him, he said. That offer was meaningful and started a chain reaction that led to interest from other schools. The Owls’ coaches, players, facilities and education opportunities all stood out to Magee. He has a 3.8 grade-point average and plans to study business.

“They’ve been down since Day 1,” Magee said. “They were my first offer. I like being in the city. It’s a nice environment. The staff, the team, everything is good. I like the facilities. The education is great, too. That’s the main thing, to be a student-athlete.”

Magee has shown flashes on defense, but his role as a valuable player on Dover’s offense limited how often he could line up at safety last season. He finished with 80 tackles, 10 TFLs and four fumble recoveries. He also made strides as a quarterback with 1,040 passing yards, 530 rushing yards and 12 touchdowns.

“Schools are looking at me mostly on defense, but Delaware talked to me about playing some offense,” Magee said.

“Temple wants me as an outside linebacker and safety. Most colleges want somebody who can fill the gap and cover. They think I can do that.”

Magee focused this offseason on his consistency as a quarterback and on improving his footwork and ball skills as a safety.

“For quarterback, it was mainly being consistent,” Magee said. “I’m inconsistent sometimes. I’ll have a couple good throws, then a couple bad throws. It’s something I needed to focus on. For the defense part, I need to work on my feet, getting in and out of my breaks faster and attacking the ball.”

Making the switch to quarterback as a sophomore put Magee on college radars, he said. He is listed at 6-3 and 208 pounds and has the size to play either position at the FBS level. He said the experience at quarterback helped to validate his athleticism for more schools.

“Colleges want athletes,” Magee said. “They started looking at me more when I started playing quarterback.” 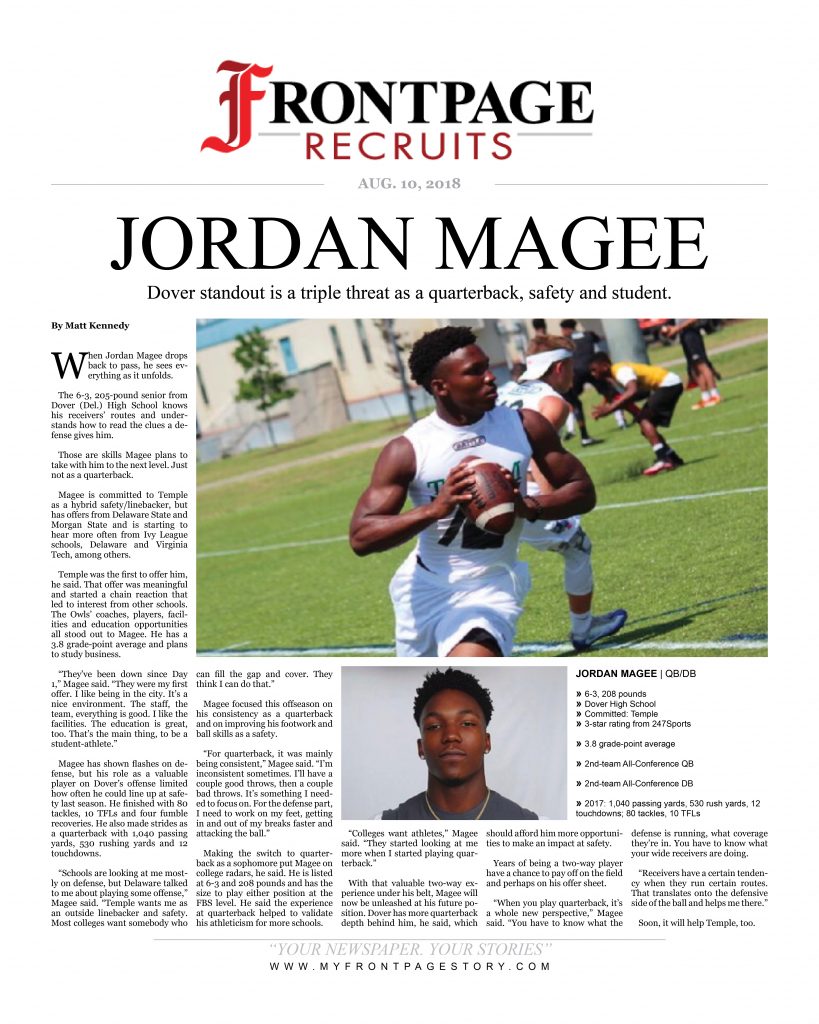 With that valuable two-way experience under his belt, Magee will now be unleashed at his future position. Dover has more quarterback depth behind him, he said, which should afford him more opportunities to make an impact at safety.

Years of being a two-way player have a chance to pay off on the field and perhaps on his offer sheet.

“Receivers have a certain tendency when they run certain routes. That translates onto the defensive side of the ball and helps me there.”

Soon, it will help Temple, too.