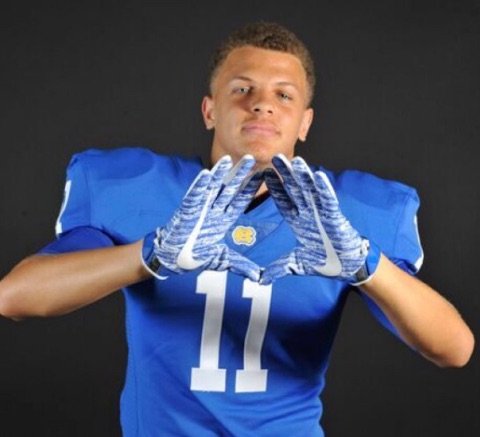 Michael Perkins has good reason to believe he will keep getting bigger and stronger. And as he grows, the wide receiver from Chapel Hill, Texas, hopes his offer sheet will, too.

A recent assessment of his spine suggested Perkins could be 6-foot-2 or taller by the end of his senior year. He is closer to 6-1 and 175 pounds now, but with the physicality of a much bigger player. Perkins is getting attention from FBS programs who love his blocking, but the interest hasn’t turned into scholarship offers.

Perkins has clear marching orders for his final prep season. Colleges would love to see him get bigger and more explosive. Perkins wants to make more catches, but he also wants to inflict more damage when he does.

“Every school I talk to loves my blocking and physicality,” Perkins said. “A lot of them are telling me they want to see me get up to the 185-pound range. I can work on extra yards and find the end zone more. Work on my explosiveness basically. Instead of catching passes for 10 yards, to go out and get 40.”

One at a time, Perkins is addressing the skills that create game-changing plays.

In the weight room, he’s getting stronger and working on his quickness. On the field, it’s all about using his hands better and not allowing balls to get into his body. Off the field, he’s working hard on his diet to gain maximum weight with a new-found attention to detail.

Perkins is trying to get bigger the right way.

“My water intake has been insane, about a gallon and a half a day,” Perkins said. “I’m changing my eating habits. My workout schedule is fine. I’m lifting. A coach told me I need to be eating 7-8 small meals a day instead of three big ones. My protein intake and calories need to be through the roof. I’m doing it, and I’ve gained about five pounds in the last week and a half.”

Perkins has also learned that power suits his style of play and benefits him just as much as quickness. The stronger he gets, he’s finding the more advantages he has.

“I’m getting a lot stronger,” Perkins said. “I’ve been really focusing on upper body strength. Lower body is great for speed and agility, but a lot of times, upper body can get you separation.”

Route-running is a focal point of Perkins’ football training. He knows he can be a more complete receiver and that he has the ability to dominate. Adding another inch or two can make a difference with coaches, too.

“Isn’t that crazy, that one inch means everything?” Perkins asked.

The way Perkins sees it, a more prototypical frame can only bring out more of his strengths. He is working on everything else he can control to get better and keep making college coaches at all levels pay attention.

Perkins has gone to camps at Texas A&M and Southeastern Oklahoma and the ETSN Combine, and he’s heard from coaches who can see his potential. They say he needs the game film to back it up, and they are asking that he uploads new film often during his senior season.

Perkins is ready for the challenge. He knows his film must be better, and he’s going to update his highlight reel as many times as coaches want. UMass, Kansas, Texas State and McKendree, he said, are among the schools that are interested in monitoring his progress.

Perkins has 35 catches for 662 yards over the past two seasons, along with 40 tackles and two forced fumbles from his post at safety. He is eager to play more on special teams and knows his willingness to do the dirty work is a huge asset in his favor.

“My film is all right,” Perkins said. “No doubt this summer I’ve been working. My route-running has improved tremendously. I’m able to outsmart corners. Not necessarily work harder, but work smarter. During 7-on-7 I’ve been exploiting man coverage. My get-off, that first step, it’s starting to get there. I can get past cornerbacks in a heartbeat and into my route.”

Those details won’t go overlooked his senior season. By his nature, Perkins goes over 100 percent of his goals. He’s done it at his church, with community service, in the classroom and in all of his offseason workouts. If the college offers don’t come, it won’t be for lack of effort.

Perkins loves football and wants to make sure it’s a part of his life for the next four years. He also knows it’s a means to an end and a degree in education administration or business administration means so much more.

“If I have four or five offers, then it comes down to what program has the career path I want,” Perkins said. “When it’s all said and done, playing four years of football and going into the NFL are so low. At the end of the day, you’re getting your degree or want to do something you like with rest of your life.” 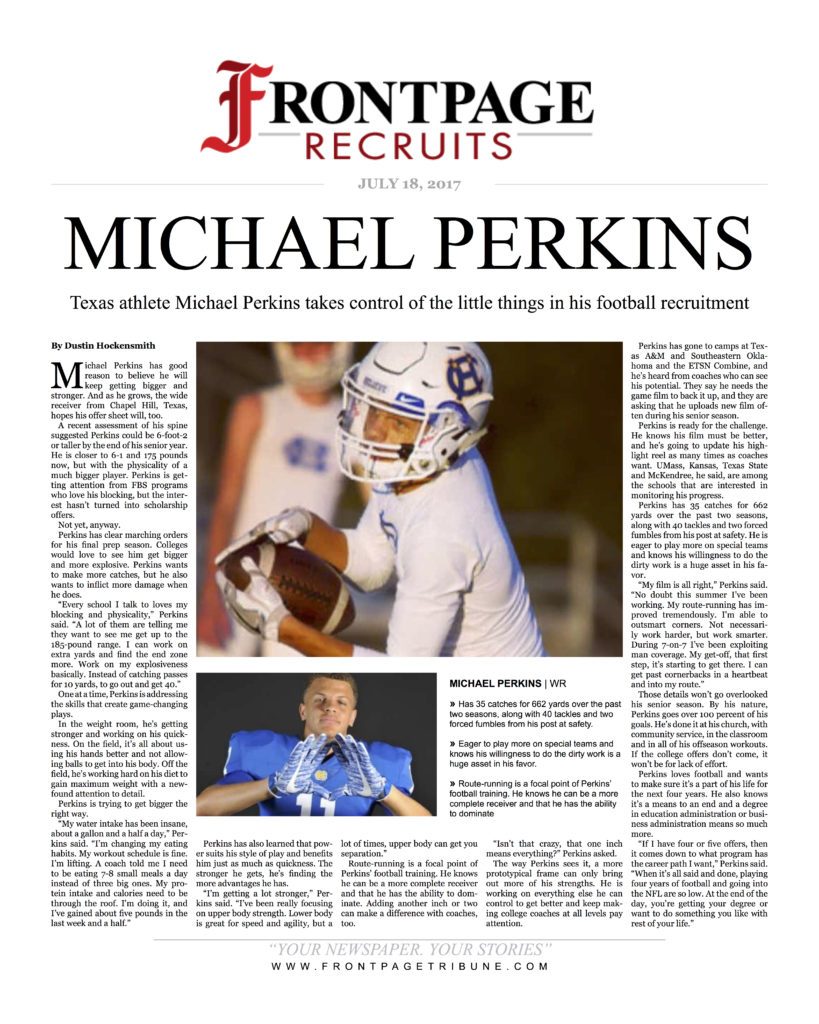