‘It doesn’t feel like work’: Linacre Media takes sports broadcasting into the future

A pioneering spirit has taken Mark Fratto all over the sporting world, to depths he might have never expected when he first broke into the business.

Still, Fratto pushes forward to new challenges and with technologies that put him at the intersection of his passion and a booming business. Linacre Media was borne of necessity and from a decade of professional experience that now make every day an adventure.

Fratto bounces around New York City’s five boroughs as a public address and ring announcer. He is also the Principal and Director of Business Development of Linacre Media, which he launched in 2008 to provide a wide range of digital video services with a client list that includes the NBA’s D-League, the WNBA, Golden Boy Promotions and a number of college programs.

MyFrontPageStory.com is here to tell your story, too. From family milestones to weddings and athletic achievements, we’ve got you covered. Learn more here.

The D-League’s Westchester Knicks were Fratto’s first clients, and they quickly took their working relationship to the next level. A small-scale digital production evolved into simulating on MSG Network and into the homes of 11 million subscribers. It marked a new level of legitimacy that Fratto spent years honing.

“A couple games in, which was intended to be digital only, management at MSG and with the Knicks themselves thought the product was very good and wanted to start simulating on MSG network,” Fratto said. “Kind of overnight, we weren’t just fulfilling an NBA contract, we were producing for 11 million households.

“It was really significant because in that one swoop, it legitimized the model of production, the digital model, where it’s a 12 or 13-man crew including announcers. We’re not using a big crew or big TV truck and we’re still producing for that many households in the New York City market.”

The Big Apple is a market Fratto knows well.

Fratto graduated from the State University of New York, College at Geneseo, with a degree in mass communication in 1999. He worked in communications at U.S. Military Academy at West Point and began his professional career at the University of Maryland, where he was one of Hall of Fame basketball coach Gary Williams’ right-hand men for seven seasons, including the Terrapins’ 2002 national championship.

Fratto left College Park for Queens, N.Y., as the head of St. John’s University’s athletic communications team. He was the media contact for the Red Storm’s storied men’s basketball program and was responsible for generating publicity for all 16 of the school’s athletic programs. These were NCAA Division I teams that had to fight for all the publicity they could get.

What Fratto found at the Queens campus was a department that slipped below national standards for communications. Beyond the work in his job description, Fratto saw the opportunity to build from a place of disadvantage and to break through with new methods to better compete for attention in the biggest media market in the world.

The need to fill a void for St. John’s fans led to the push for in-house video production. Fratto honed that concept at St. John’s and later applied it to the private market when he launched Linacre Media. 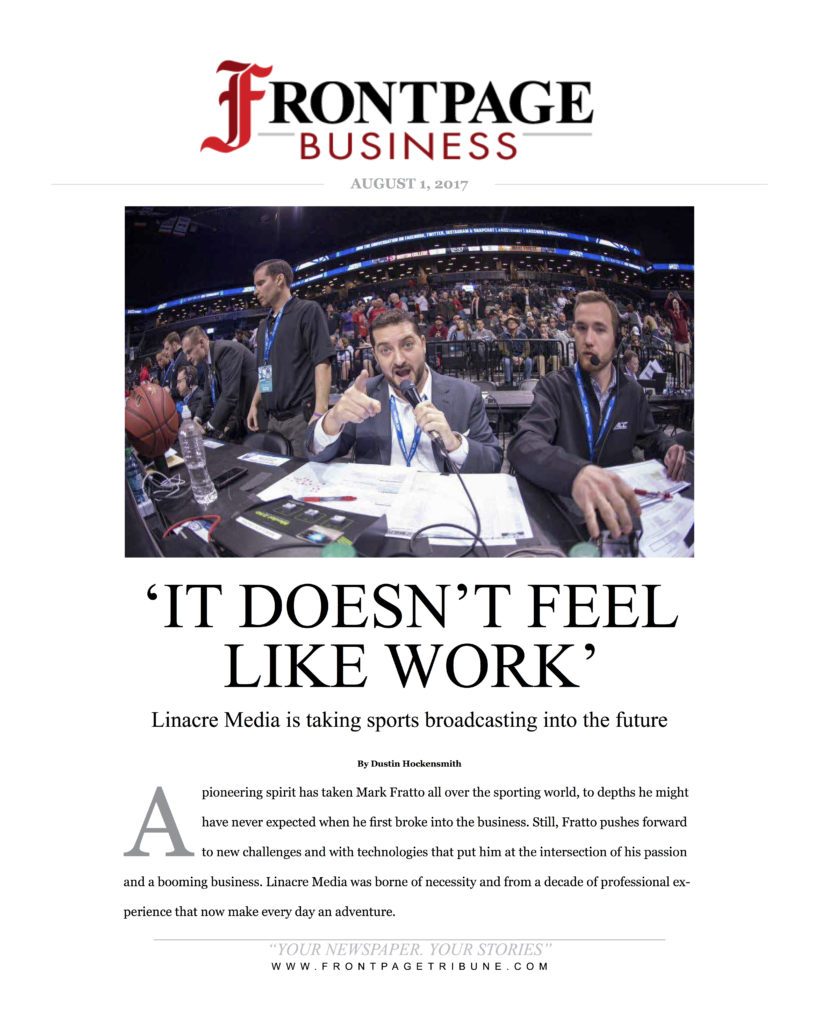 “At St. John’s, we had to essentially become our own media outlet to get any kind of publicity in any sport but men’s basketball,” Fratto said. “It was having up-to-date written information. It was hitting social media hard, and then the video aspect, whether on demand stuff telling feature stories, athlete profiles or announcements, then of course live games themselves.

“What I wanted to do with Linacre Media was take that and privatize it and make it available to a number of schools, teams, leagues and pro teams.”

Fratto has stayed at the front of the technological curve, in part by attending the annual Sports Video Group College Sports Summit in Atlanta. The latest push is further into social media with better optimization for mobile devices. The recent launch of “FIGHTNIGHT LIVE” on Facebook Live is a new frontier with a full range of added benefits for boxing fans.

“FIGHTNIGHT LIVE” features multiple camera angles, graphics and plenty more, along with the opportunity for fans to interact with commentators and analysts before, during and after the fights. It makes good business sense for all involved, including Fratto as a driving force behind the move to the Facebook Live platform.

“We’re taking stuff that wouldn’t have been on TV before and giving it a medium and then adding an interactive element,” Fratto said. “It’s not just a cathartic release or break from your work day or work week. Now, it’s something where your opinion matters. You have a voice and people will hear it. For me, it’s cool.

“I think it’s a tremendous opportunity, not just for fight sports but a lot of different sports to follow this model. We shot 50 games for the D-League for Facebook Live. There’s big opportunity there. The advantage we have is we have a great relationship with Facebook, where they take the content and distribute it themselves. They’re doing digital marketing for us and with us.”

Fratto is pushing forward on the broadcasting front and still pursuing his passion for public address with gigs announcing for Major League Soccer’s NYC Football Club, steady work at Madison Square Garden and the Barclays Center in Brooklyn and as the full-time announcer for the Brooklyn Cyclones, a short-season affiliate of the New York Mets.

Public address and video production continue to intertwine and sometimes create business for Fratto he might not have gotten otherwise. All the while, he’s working for himself and enjoying the freedoms that comes with it. Fratto is living the dream and pushing the boundaries on the front wave of the digital video boom.

“That relaxed setting, the ability to travel to Florida when I want, and doing those things where we have crews of 15 to 20 people in places bringing in revenue for the company, it’s really optimal,” Fratto said.

“It doesn’t feel like work. I go to the gym in the middle of the day when there’s not a lot of crowds. You can do all these different things with your life that you just don’t get those opportunities otherwise.”