Their own normal: Wagner family finds its stride between deployments

The Wagners enjoy their bubble, but they’ve learned to find their stride without it.

The family’s story isn’t uncommon in the military, where deployments create an ever-changing rhythm to their lives. Jonathan is an infantry officer in the Marine Corps. He values the work he does and is uniquely positioned to make the world a better place. He has served in the Middle East and on a variety of Marine Expeditionary Unit (MEU) tours.

The Wagners — Jacquelyn and Jonathan and sons Jonathan Jr. and Noah — have come to appreciate the time between Jonathan’s deployments. They happen in three-year cycles as his deployment status rotates. The family currently resides in Washington, D.C. after previous stints in North Carolina, Washington, D.C. and California.

Rather than holding their breath while Jonathan is gone or fearing the day he departs again, the Wagners are appreciating their own brand of normal and focusing on the days ahead of them.

The importance of Jonathan’s work and the calling it has on his life more than balance any temptation to feel guilt for leaving his family.

“I feel like I’ve been blessed to live a life of public service in the Marine Corps,” Jonathan said. “I’m doing what I was put on the Earth to do. I feel like I have made a positive impact on the world around me. That quickly balances it out.

“I believe my work is necessary. I believe I play a small role in preventing and removing suffering from the lives of others. Whether it is stopping bad guys from doing bad things to good people or providing humanitarian assistance following a natural disaster, I have a job that directly allows me to do my part to make this world a better place. I also believe that my family understands the importance of my work.”

Jonathan’s life work is easy for wife Jacquelyn to support, but she has gone a step further.

Jacquelyn has emerged as a leader herself in the Marine Corps community, helping to guide other families through the challenges and pitfalls of deployment. She has been through it enough to teach younger families how to not only cope with the distance, but thrive in spite of it.

“Thankfully, in the military community, what we do have is a great network of wives,” Jacquelyn said. “Usually, when guys deploy, the wives team up and are like sister wives. You lean on other wives for support.

“We had a really close friend, her husband deployed with John. We basically raised our kids together. When you’re in California and far away from family, you have to learn to become independent quickly and lean on others for support.” 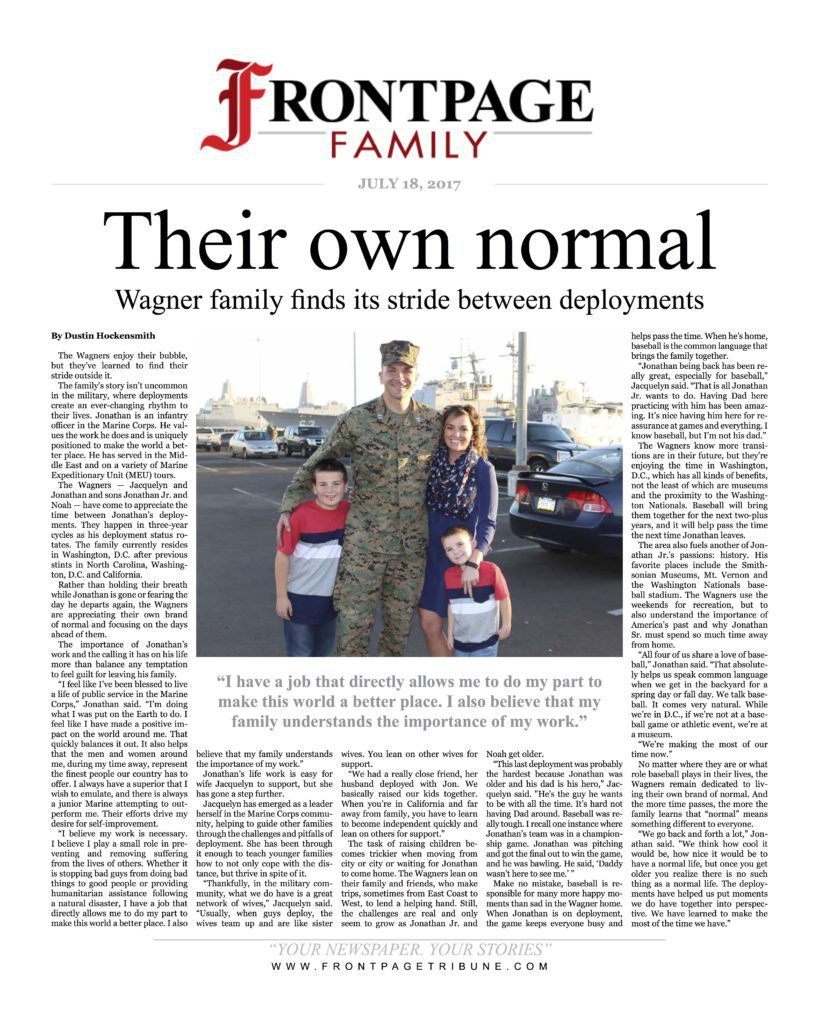 The task of raising children becomes trickier when moving from city or city or waiting for Jonathan to come home. The Wagners lean on their family and friends, who frequently make trips, sometimes from East Coast to West, to lend a helping hand. Still, the challenges are real and only seem to grow as Jonathan Jr. and Noah get older.

“This last deployment was probably the hardest because Jonathan was older and his dad is his hero,” Jacquelyn said. He’s the guy he wants to be with all the time. It’s hard not having Dad around. Baseball was really tough. I recall one instance where Jonathan’s team was in a championship game. Jonathan was pitching and got the final out to win the game, and he was bawling. He said, ‘Daddy wasn’t here to see me.’”

Make no mistake, baseball is responsible for many more happy moments than sad in the Wagner home. When Jonathan is on deployment, the game keeps everyone busy and helps pass the time. When he’s home, baseball is the common language that brings the family together.

“Jonathan being back has been really great, especially for baseball,” Jacquelyn said. “That is all Jonathan Jr. wants to do. Having Dad here practicing with him has been amazing. It’s nice having him here for reassurance at games and everything. I know baseball, but I’m not his dad.”

The Wagners know more transitions are in their future, but they’re enjoying the time in Washington, D.C., which has all kinds of benefits, not the least of which are museums and the proximity to the Washington Nationals. Baseball will bring them together for the next two-plus years, and it will help pass the time the next time Jonathan leaves.

“All four of us share a love of baseball,” Jonathan said. “That absolutely helps us speak common language when we get in the backyard for a spring day or fall day. We talk baseball. It comes very natural. While we’re in D.C., if we’re not at a baseball game or athletic event, we’re at a museum. We’re making the most of our time now.”

No matter where they are or what role baseball plays in their lives, the Wagners remain dedicated to living their own brand of normal. And the more time passes, the more the family learns that “normal” means something different to everyone.

“We go back and forth a lot,” Jonathan said. We think how cool it would be, how nice it would be to have a normal life, but once you get older you realize there is no such thing as a normal life. The deployments have helped us put moments we do have together into perspective. We have learned to make the most of the time we have.”