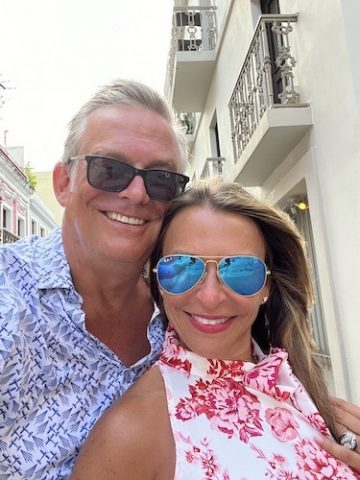 You never know how fate can make a difference in someone’s life.

This is something Ryan Shaw learned when he first saw Vanita their freshman year on the Michigan State campus in 1990. The first time their eyes locked on each other, Ryan never imagined she was looking at him. He thought she was way out of his league, but fate intervened on numerous occasions giving Ryan several opportunities to meet and speak to her.

Unfortunately, he failed miserably each time, struggling to speak and only able to mumble incoherently.

Finally, Ryan unexpectedly found himself in her dorm room speaking to her roommate one evening. Soon Vanita walked into her room, they made eye contact and Vanita made a beeline over to Ryan and sat down right next to him. It was then Ryan realized the attraction was mutual.

After spending the first night talking until morning, they knew right away that they were meant to be together. It’s now 32 years later and they have two amazing children together and are now celebrating their silver wedding anniversary. Ryan could not ask for a better woman to call his wife.

“She means everything to me,” Ryan said. “She is my soul mate. We’ve been together for 32 years, and I would be lost without Vanita. We are great partners and best friends. And there’s really not one thing that makes it great. It’s everything.”

Ryan appreciates everything about his wife, but one thing that seems to really stick out is watching her as a mom. Vanita is such an amazing mother to Logan and Ava, and while they will both soon be in their 20s, that does not stop Vanita from loving and supporting the two of them unconditionally. Her endless compassion for Logan and Ava is noticed not only by her husband, but by so many people all around Vanita.

“She puts them first, every time,” Ryan’s sister Amanda said. “She loves them completely. She creates an environment where they feel safe and loved. She doesn’t judge them. She supports them and guides them without being pushy. She keeps the line of communication open with them so they always know when to ask – for help, for love, for guidance.”

“She’s not only great with our kids, but all her nieces and nephews,” Ryan added. “She’ll do whatever they need… within reason obviously. She always wanted to host the birthday parties and after-formal dances at our house. This allowed her to do the decorations and get the food and drinks. She just loves to see the two of them have fun. The way she loves them and takes care of them is awesome. And she even calls me her oldest kid.”

Vanita is such a sweet, kind and loving soul, and she would certainly do anything for her family. She is not only a role model to her biological children, but also to her big child she married, and all three of them are beyond appreciative of her constant love and support.

Vanita’s selflessness goes far beyond the way she treats and loves Logan, Ava and Ryan, however, as she is also someone who is constantly treating her friends and everyone in between with nothing but care and respect.

“Vanita knows how to cheer people up and make them laugh,” her cousin Vanessa said. “It doesn’t matter if I’m upset about something, it won’t be for long with Vanita by my side cracking jokes! I love how blunt she is and how she says what everyone else is thinking but too scared to say! I admire how she throws caution to the wind and doesn’t care what others think.”

If you need anything, day or night, you can call on Vanita. Her friends know this, and her sister-in-law certainly knows this and is far and away grateful for this. Amanda is so glad to have Vanita in her life, and she is glad her brother married a great wife.

“She was the sister I never had and always wanted!! As I grew, through teenage years, early adulthood, adulthood and motherhood, she was always a constant in my life,” Amanda said. “A friend I could talk to, a sister I could confide in, a mother to give me the true advice others maybe thought was too hard to say.”

One theme between what Vanessa and Amanda have both mentioned about Vanita is the fact that she is not afraid to be honest… and she can be brutally honest if a situation warrants it. She will certainly always say things while sparing your feelings as much as possible, but she will not hold back.

Vanita just wants what is best for everyone, and she feels speaking her mind aligns well with this. Her heart is huge and she is going to be there for everyone no matter what, and her own experiences and battles allow her to use firsthand experiences to help out everyone else.

“The love she has for everybody is amazing,” Ryan said. “If there is a friend or family member going through tough times, she will organize meal trains, ensuring they can focus on this issue at hand and not what to eat at night. She will go above and beyond for everybody. She’s very supportive and always there for her friends, many of whom she’s had since high school. If she knows someone is not doing well, she regularly checks in on them.”

Vanita does everything with heart and she does everything with passion, and that is what makes her such a great wife, mother and friend, as well as a great leader at her job. She is passionate about what she does and is constantly helping to push her employees to be the best and maximize their potential.

All in all, Vanita is such a wonderful person who anyone would be honored and lucky to have in their lives. She shows up when people need her the most, and she is a friend to everyone.

“Vanita, you are my love, my life, my everything,” Ryan said. “I am so lucky to call you my wife. You make me the happiest person in the world.” 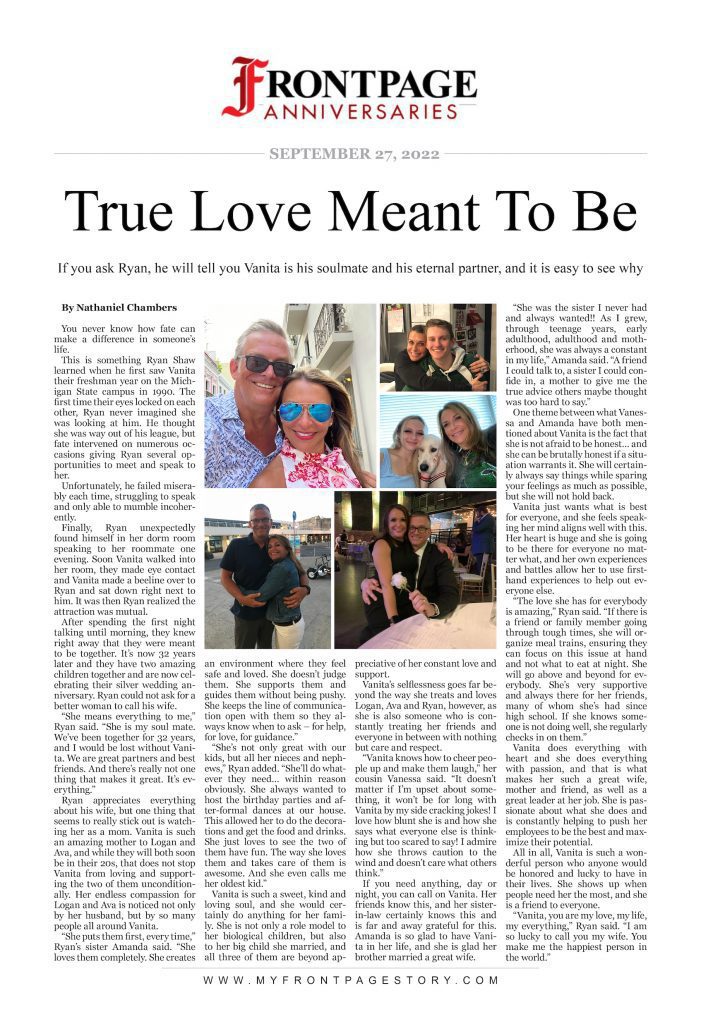 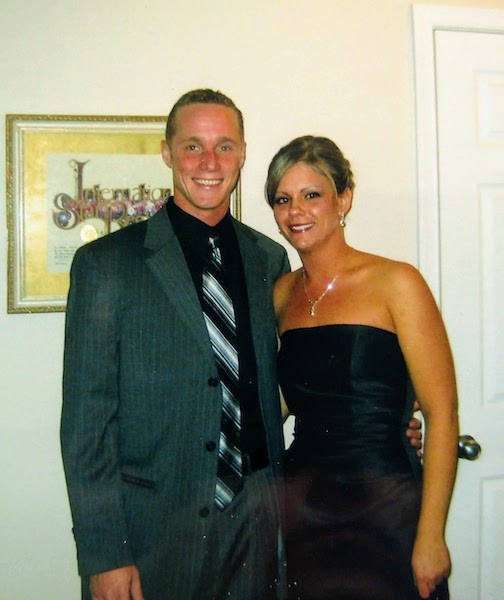