A Christ-Centered Marriage: Debi prays for her family every single day, and it has made all the difference

Jim and Debi’s love story is one for the ages.

This couple has been married for over half a century, yet there is not a day that goes by where Jim is not truly thankful and appreciative of his loving, faithful wife. He has nothing but good things to say about her, and he feels blessed that he gets to be her husband.

“She means everything to me,” Jim said. “We got married in 1970 and have been married almost 52 years. It has been the greatest years of my life, and she is truly my world.” Christ is at the center of their marriage, and Debi’s beliefs and values are what put Him there.

“I was raised Roman Catholic, so all I knew was you were supposed to go to mass on Sunday. Eventually, I didn’t go to church anymore,” Jim said. “She didn’t want the boys to grow up without going to church, however, so she started taking them to church. At the age of 50, I started listening to only Christian radio. I also started reading the Bible. John 14:6, Acts 4:12, and 1 Timothy 2:5 really stuck out to me, as they reminded me that there is only one way to the Father. The most important thing through the years is that through her prayers, God changed my heart.”

Jim and Debi have three wonderful sons and now have five beautiful grandchildren. Jim knows that Debi prays for him, their sons and daughters-in-law, and their grandchildren every day. Everyone in their family can count on her being there no matter the situation, and they know she truly wants what is best for them. “She always looks out for them,” Jim said. “She’s a mama bear; a real protector. She also cares about other people so much, much more than herself.”

While family is the most important thing to Debi on this earth, nothing is more important to her than her heavenly father. Debi is deeply rooted in faith, and she has lovingly encouraged Jim in his own walk of faith. “My wife said she prayed for me for 28 years because I did not know the Lord, and I developed a relationship with the Lord,” said Jim. Debi was able to see in him the man God called him to be.

“When I was first becoming a Christian, she explained verses to me and prayed with me.” With her gift of discernment, Debi is the one her husband is glad he has in his corner. Jim said, “When you love a woman like that, you should show her love and respect. When you get married, you sign up to serve somebody else. Through time, I’ve learned you need to be a servant leader to that person.”

Whether you are talking about her family, her friends or a stranger in need, Debi’s love does not discriminate. She has a servant’s heart, loves like Jesus, and is always making sure that the people around her have everything they need.

Debi is a strong Christian woman who spends time daily in the Word and in prayer, and she makes sure that she encourages those around her to do the same. She is truly selfless and completely genuine. People know that when they are around Debi, they are going to be well cared for. “She has such a kindness about her,” Jim said. “Her heart is huge and she has always thought of other people. She is just a beautiful, kind person.”

Jim tries his best to honor her every day, and though there are days he knows he falls short, his love and respect for her never waver. She is truly the greatest thing that has ever happened to him, and his blessings with her are countless. “I love her with all my heart,” Jim said. “She’s my valentine every day. I just want to thank her for being the mother, grandmother, wife and daughter that she is. I know she doesn’t get much recognition for that.”

This is truly an amazing love story, and it is one that should inspire others to make Christ the center of their marriage. 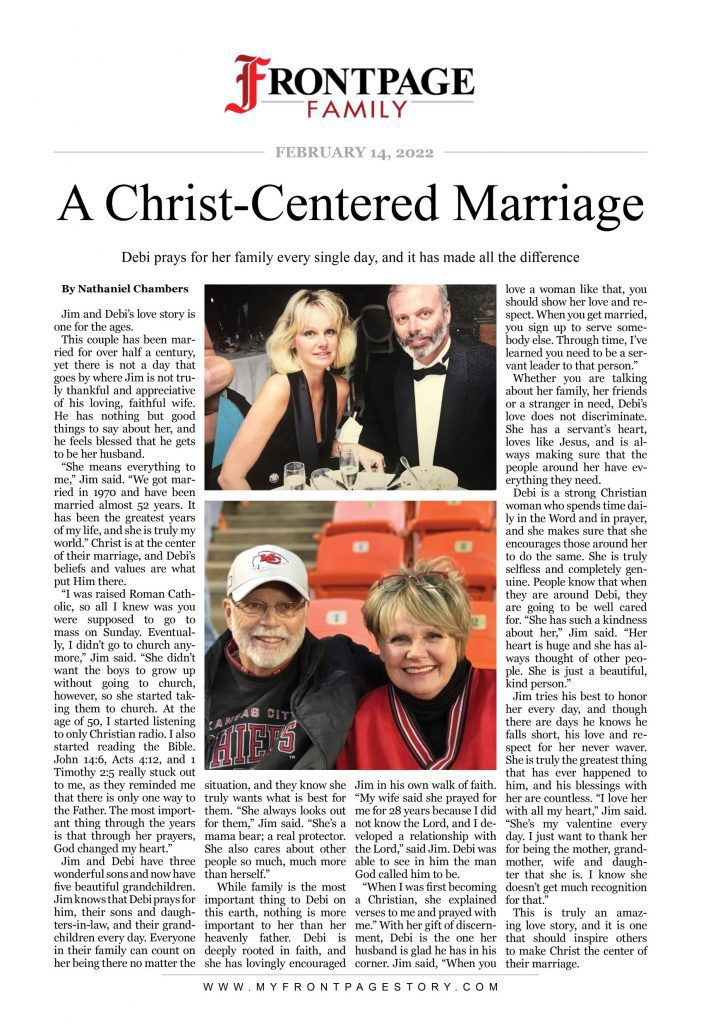