‘A Special Life’: The life of George P. Gromacki was an extraordinary one, because at its core, it is a story of love 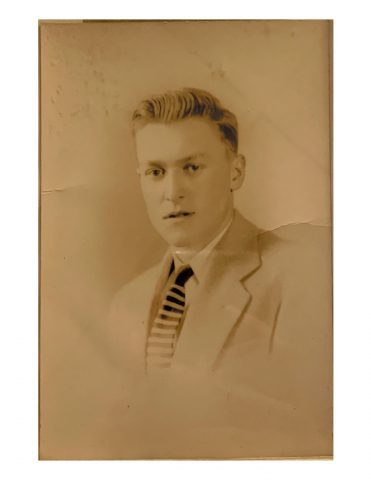 George P. Gromacki grew up on a Massachusetts farm as the youngest of eight children to Adam and Josephine. Adam knew that America afforded his family opportunities he did not have in Poland. All of the children were required to work on the farm. It was hard, physical, work, and it taught George the work ethic that would lead to his successes later in life. His parents also taught him the importance of being a just and fair man.

George was the first child his parents allowed to play high school sports. As a result, he considered playing a privilege, rather than a right, and loved sports with all of his heart. They would play a big part in his life, and that of his children, in the years to come.

He became the first member of his family to graduate from college, earning his Associate’s degree. He was then drafted into the US Army during the Korean War. It was not easy, but as he said later, “it toughened me up.” He returned home and earned two more degrees, a BS in Accounting and an MBA.

One day in 1958, George saw the picture of a girl he recognized from the student union at UMass.  He asked his friends if they could set him up with her, and they arranged a date. Although she had no idea who he was, Jean Klocko agreed to go out with him. He knew within 6 weeks that she would be his wife someday.  He proposed, and she said yes. They married in the summer of 1959, and he was the one and only love of her life for 42 years, and vice versa.

Naturally gregarious with a love for people, he excelled in the real estate and insurance businesses; still he longed to reach his full potential. So each night, after a long day of work, he attended the Western New England School of Law. He earned his fourth college degree, a JD, and then passed the bar.

George used his knowledge to help build South Deerfield into one of the most desirable communities in Western Mass., including developing King Philip and Gromacki Avenues from scratch. “He loved his hometown,” Jean said. “It was so important that the developments were quality so that he and the town could be proud of them for years to come.”

He bought two homes and built another on Sugarloaf Street. He also owned properties on Elm Street and in Hatfield for a total of eight apartments and two pieces of farmland that he and Jean rented. He enjoyed providing people a nice place to live, and offered below-market rates to be fair to all. In addition, he served full-time on the faculty at Holyoke Community College. He found joy in teaching because he truly loved helping others.

The performance aspect of the job fit his personality perfectly. “He always wanted to make people feel comfortable, and made friends very easily,” said Jean. “He was such a joyful person with a great sense of humor.”

Of all things, he loved his family the most.

“He always made time for his family,” Jean added. “He never missed our kids’ high school games, home or away.  And we always ate dinner together.”

Our Veterans do so much for us. MyFrontPageStory is trying to help tell their story and remember their legacy. Order yours today!

His daughter Sue recalls, “Every day at 5:03 pm, I would hear the door to our garage squeak. Dad was home! It is still one of the sweetest sounds I have ever heard; I am so glad they never greased that door.”

It’s hard to speak of George Gromacki without focusing on his faith, and as an extension of that, his service to St. Stanislaus Church. He was proud of his Polish heritage, and by serving his Parish, he also was serving his fellow Poles. He was a lector, collector, bell-ringer, and Parish Council President. He founded the Palm Sunday Pancake Breakfast and spearheaded building the Pope John Paul II Center. He donated to the parish, including the church hymnals and the large wooden cross in the center.

George’s love of sports, family and community led him to coach his children’s youth teams. And he played to win, almost always coming in first place. He treated every kid in So. Deerfield like a champion (Sue’s nickname for him), whether they were an All-Star or the last one off the bench.

He and Jean also built a tennis/basketball court in their backyard.

“One thing that always brought a smile to his face was watching the neighborhood kids play various sports at our house,” she said.

Although Sue and his son, G.P., never played organized tennis, G.P. married Miki, who did.  Their daughter, Katie, plays competitively. All four of his grandchildren, including Derek George Gromacki and Sarah and Stephanie Lathrop, are athletic.

“They are all good students and athletes, but most importantly, they are very good children,” Jean said. “They’ve carried on his ideals and goals.”

George loved his country. He was proud of being a Korean War Veteran and served as Chairman of the town Memorial Day parade, leading the parade in his uniform (which he still fit in 30 years later). In 1999, he raised the money, then personally installed American flags on every telephone pole on Sugarloaf St., which stay up from May to September.

When his future son-in-law, Scott, then a Captain in the US Army, saw the flags for the first time, he said, “This is the kind of town that I want to defend.”

When told that George installed them, he replied, “What a great American!” George also led the construction of the monument to the town’s Veterans of Foreign Wars and spearheaded the placement of a nameplate of each person killed in action above his respective street sign. George’s two years in service impacted his community in a substantial way.

George taught his children to stay true to their principles, to do what is right, and to always do their best. Sue is internationally-recognized in optometry, while G.P. is among the most accomplished college basketball coaches in the country. George was G.P.’s idol and his first image of what a coach should be.

“My son was like his shadow,” Jean said. “They were very close. My son is a very hard worker and believes in quality work. George placed in him a sense of competitiveness, and he is a very competitive person now.”

George wasn’t physically present during G.P.’s three national championships and two WBCA National Coach of the Year awards, but he was present in spirit. G.P. realized that when the score of the first game after he died was 69-30, their exact ages.

In summary, George ascended from the most humble of beginnings to success both personally and professionally, and he did it with great integrity, leadership, character, kindness and love.  His aim was to make the most of the talents and opportunities God gave him and to do God’s will.

“He lived a special life,” Sue said. “There will never be another one like it. His life was about giving back: to the God to whom he was so grateful, the family he loved, and the community he served. Although he left this earth much too early, he made a substantial impact on his generation and on generations to come.”

For 34 years, a framed poem hung in George’s office behind his desk, for all of his customers to see, if they looked closely enough.

It began, “There is no difficulty that enough love will not conquer,” and concluded, “If only you could love enough you would be the happiest and most powerful being in the world.” 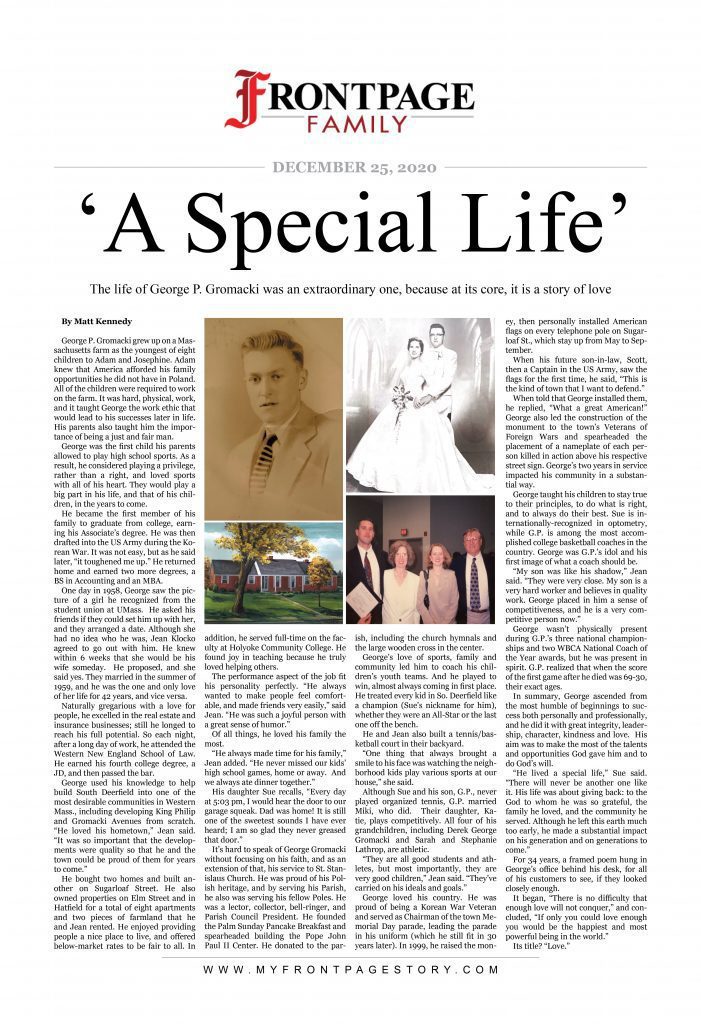