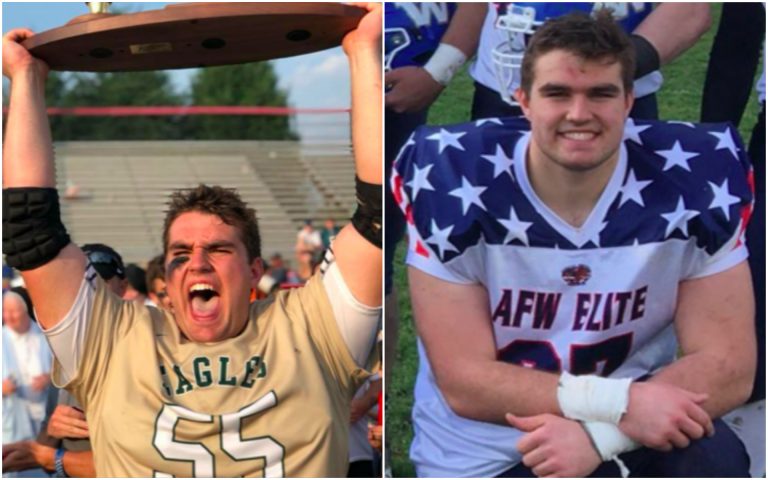 Mac Barry knew a couple more inches on his 6-1, 270-pound frame might have made the difference in how big-time colleges perceived him. But at the end of a tricky recruiting process, he learned that didn’t mean as much to him as getting his college decision right.

Barry got his share of high-profile offers to play football at the Divisions 1, 2 and 3 levels, but the blend of academics and football at D-2 St. Anselm College in Manchester, N.H., won him over.

“I like that it will challenge me academically and athletically,” Barry said. “I loved the coaches. I loved the campus. They have really good people on campus who care about you. They’re also who wanted me the most and where I felt most comfortable, where I liked the kids on the team and where I could see myself fitting in the best. I will be living there for the next four years and being around those coaches and teammates.”

A leader and a “Renaissance Man” at Bishop Shanahan High School, Barry knew he wanted to challenge himself academically and play football as soon as possible at the next level. When he ran a wide range of college offers through that filter and considered coaching staffs and campus fit, St. Anselm emerged as a clear favorite.

Barry was accomplished as a two-way player and interior lineman at Bishop Shanahan, and he appealed to colleges because of his ability to play lacrosse and throw shotput. His athletic skills were diverse, but his football dimensions were open for interpretation and led to interest from schools across the whole spectrum of sizes.

The wide scope of offers made the recruiting process even tougher. The Barry family had no shortage of options, but they were faced with the challenge of weighing all the pros and cons of big and small schools alike.

Dayton, Stetson, St. Francis and Sacred Heart were among the bigger schools to pursue Mac. Little Ivies such as Williams, Wesleyan and Hamilton were also interested.

“If he had 2-3 more inches, this would have been a hell of a lot easier,” Dan Barry said with a laugh. “Overall, the whole process was fun, but I felt bad for him going through it. You become friendly with guys at all different levels, then you feel bad. It’s tough. In the end, it all worked out the way we envisioned it.” 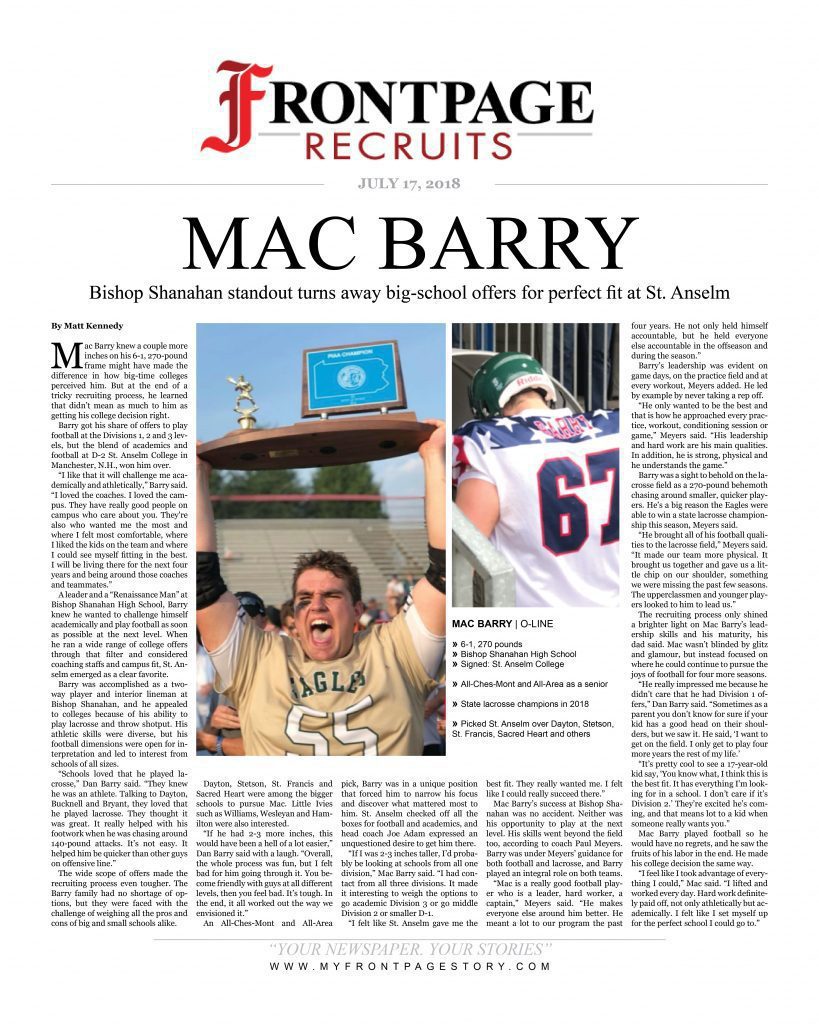 An All-Ches-Mont and All-Area pick, Barry was in a unique position that forced him to narrow his focus and discover what mattered most to him. St. Anselm checked off all the boxes for football and academics, and head coach Joe Adam expressed an unquestioned desire to get him there.

“If I was 2-3 inches taller, I’d probably be looking at schools from all one division,” Mac Barry said. “I had contact from all three divisions. It made it interesting to weigh the options to go academic Division 3 or go middle Division 2 or smaller D-1.

“I felt like St. Anselm gave me the best fit. They really wanted me. I felt like I could really succeed there.”

Mac Barry’s success at Bishop Shanahan was no accident. Neither was his opportunity to play at the next level. His skills went beyond the field too, according to coach Paul Meyers. Barry was under Meyers’ guidance during both football and lacrosse seasons, and Barry played an integral role on both teams.

“Mac is a really good football player who is a leader, hard worker, a captain,” Meyers said. “He makes everyone else around him better. He meant a lot to our program the past four years. He not only held himself accountable, but he held everyone else accountable in the offseason and during the season.”

Barry’s leadership was evident on game days, on the practice field and at every workout, Meyers added. He led by example by never taking a rep off.

“He only wanted to be the best and that is how he approached every practice, workout, conditioning session or game,” Meyers said. “His leadership and hard work are his main qualities. In addition, he is strong, physical and he understands the game.”

Barry was a sight to behold on the lacrosse field as a 270-pound behemoth chasing around smaller, quicker skill players. He’s a big reason the Eagles were able to win a state lacrosse championship this season, Meyers said.

“He brought all of his football qualities to the lacrosse field,” Meyers said. “It made our team more physical. It brought us together and gave us a little chip on our shoulder, something we were missing the past few seasons. The upperclassmen and younger players looked to him to lead us.”

The recruiting process only shined a brighter light on Mac Barry’s leadership skills and his maturity, his dad said. Mac wasn’t blinded by glitz and glamour, but instead focused on where he could continue to pursue the joys of football for four more seasons.

“He really impressed me because he didn’t care that he had Division 1 offers,” Dan Barry said. “Sometimes as a parent you don’t know for sure if your kid has a good head on their shoulders, but we saw it. He said, ‘I want to get on the field. I only get to play four more years the rest of my life.’

“It’s pretty cool to see a 17-year-old kid say, ‘You know what, I think this is the best fit. It has everything I’m looking for in a school. I don’t care if it’s Division 2.’ They’re excited he’s coming, and that means lot to a kid when someone really wants you.”

Mac Barry played football in a way he would have no regrets, and he saw the fruits of his labor in the end. He made his college decision the same way.

“I feel like I took advantage of everything I could,” Mac said. “I lifted and worked every day. Hard work definitely paid off, not only athletically but academically. I felt like I set myself up for the perfect school I could go to.”

Like this story? Can you think of an occasion in your own life that’s worthy of the feature story treatment from a professional journalist? Read more about who we are and what we can do for you.