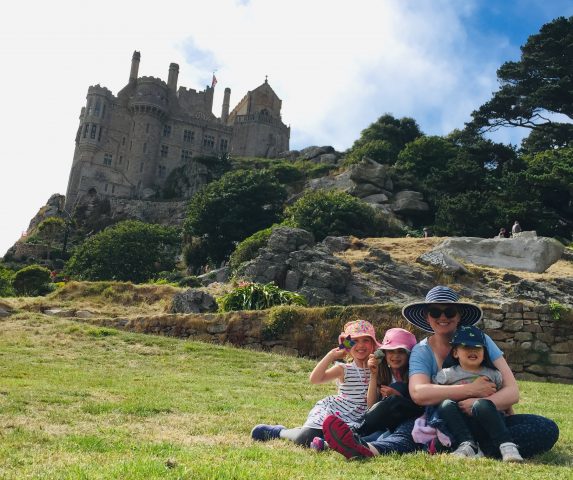 Miriam Allan puts her natural gifts on public display all the time, but somehow doesn’t realise just how much she is admired by family, friends and fans.

Miriam is a classical soprano who performs in concerts, opera and recitals. She maintains a full and pressure-packed schedule where she flies all over Europe, to the United States, her native Australia, and elsewhere to perform.

Her husband, Richard Bannan, also sings professionally, but is the first to admit Miriam is on another level, and not just on ability alone.

The way she works and prepares, and her readiness to jump-in at a moment’s notice are as impressive as her God-given abilities. She’s a rarity as an artist who is willing to roll up her sleeves and do the work.

“It’s humbling. Things many of us find difficult to do, she can do without blinking,” Richard said. “She can operate at such a high level and answer a call on weeks or days notice to do a job I’d be stressed about for months and months.”

Richard and Miriam crossed paths early in their respective singing careers. Their relationship began with an invitation to sing in the same choir, then led to two years of cordial greetings.

It became something more when Richard had too much wine and Miriam had a seat to spare.

Richard stumbled his way to the bus for a tour stop hours away. He was over-served the night before and stepped on a packed bus with just one open seat, which of course was next to Miriam.

“She sat me down and said, ‘It looks like you need to not talk,’” Richard said. “I’m going to watch ‘Buffy The Vampire Slayer.’ Do you like ‘Buffy’? We watched five episodes of Buffy on this bus journey then got off and had dinner together and spoke about Buffy. We discovered we both could do it at considerable length.

“For the rest of the tour, we were pretty much inseparable. One thing led to another, and we moved in with each other six months after that. We bought a house a year or so later, and we were engaged a year or so after that.”

Miriam’s career took off not long after, and that proved to be one of just a few occasions where she and Richard shared the stage.

“We work together very, very rarely,” Richard said. “And it’s normally because she has decided to slum it.” 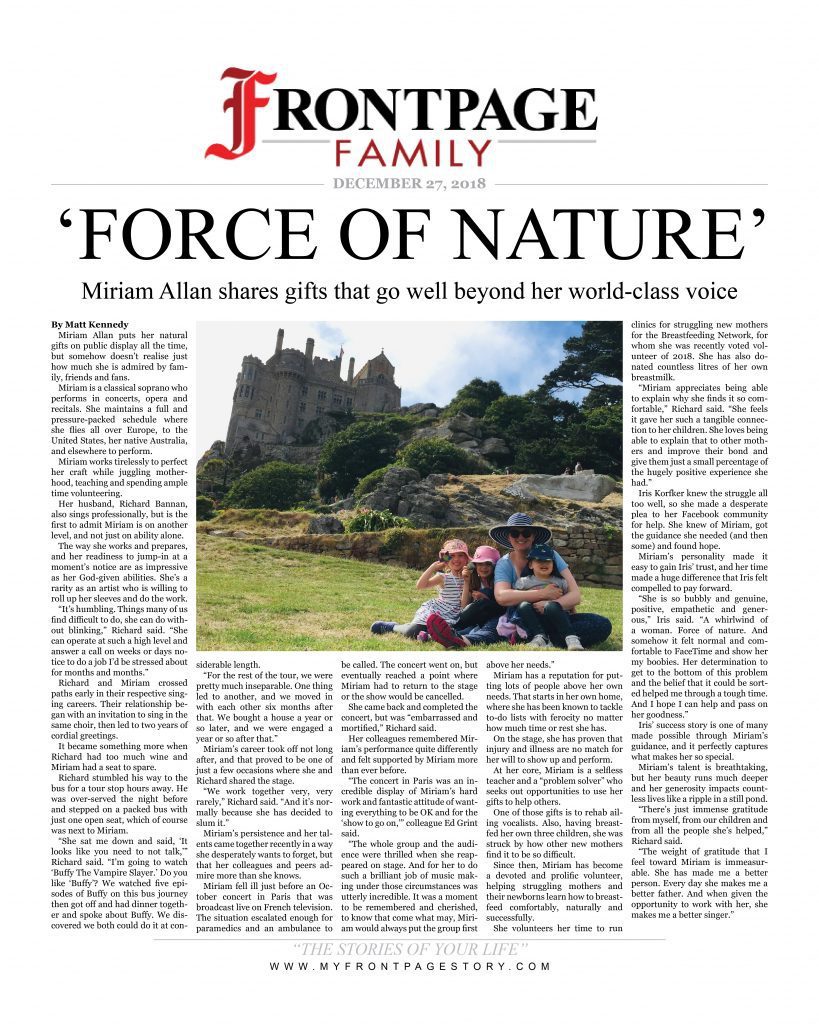 Miriam’s persistence and her talents came together recently in a way she desperately wants to forget, but that her colleagues and peers admire more than she knows.

Miriam fell ill just before an October concert in Paris that was broadcast live on French television. The situation escalated enough for paramedics and an ambulance to be called. The concert went on, but eventually reached a point where Miriam had to return to the stage or the show would be cancelled.

She came back and completed the concert, but was “embarrassed and mortified,” Richard said.

Her colleagues remembered Miriam’s performance quite differently and felt supported by Miriam more than ever before.

“The concert in Paris was an incredible display of Miriam’s hard work and fantastic attitude of wanting everything to be OK and for the ‘show to go on,’” colleague Ed Grint said.

“The whole group and the audience were thrilled when she reappeared on stage. And for her to do such a brilliant job of music making under those circumstances was utterly incredible. It was a moment to be remembered and cherished, to know that come what may, Miriam would always put the group first above her needs.”

Miriam has a reputation for putting lots of people above her own needs. That starts in her own home, where she has been known to tackle to-do lists with ferocity no matter how much time or rest she has.

On the stage, she has proven that injury and illness are no match for her will to show up and perform.

At her core, Miriam is a selfless teacher and a “problem solver” who seeks out opportunities to use her gifts to help others.

One of those gifts is to rehab ailing vocalists. Also, having breastfed her own three children, she was struck by how other new mothers find it to be so difficult.

Since then, Miriam has become a devoted and prolific volunteer, helping struggling mothers and their newborns learn how to breastfeed comfortably, naturally and successfully.

She volunteers her time to run clinics for struggling new mothers for the Breastfeeding Network, for whom she was recently voted volunteer of 2018. She has also donated countless litres of her own breastmilk.

Iris Korfker knew the struggle all too well, so she made a desperate plea to her Facebook community for help. She knew of Miriam, got the guidance she needed (and then some) and found hope.

Miriam’s personality made it easy to gain Iris’ trust, and her time made a huge difference that Iris felt compelled to pay forward.

“She is so bubbly and genuine, positive, empathetic and generous,” Iris said. “A whirlwind of a woman. Force of nature. And somehow it felt normal and comfortable to FaceTime and show her my boobies. Her determination to get to the bottom of this problem and the belief that it could be sorted helped me through a tough time. And I hope I can help and pass on her goodness.”

Iris’ success story is one of many made possible through Miriam’s guidance, and it perfectly captures what makes her so special.

Miriam’s talent is breathtaking, but her beauty runs much deeper and her generosity impacts countless lives like a ripple in a still pond.

“There’s just immense gratitude from myself, from our children and from all the people she’s helped,” Richard said.