Keep On Fighting: The fight is not over for Ruth yet, but she keeps winning every little battle along the way 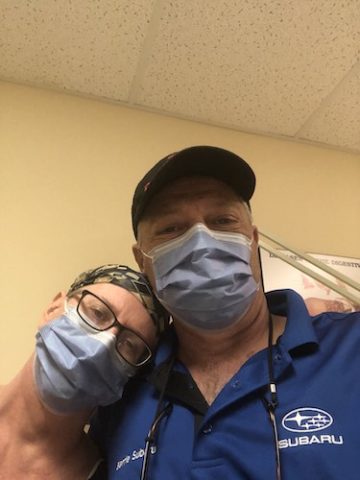 Do not ever question Ruth Rodgers’ optimism and outlook on life.

This is a woman who has been through the wringer, but somehow she always finds a way to keep up her optimism. She will tell you that her sense of optimism and never giving up is all because of her husband, Kevin Fletcher, but he will tell you that he has played just a small part in the perseverance his wife shows on a daily basis.

On top of her amazing fight, Ruth is also someone who has a great personality. She loves watching hockey, movies, going bowling, hitting up the casino, dressing up at Halloween and spending lots of time with family. She is a special woman in Kevin’s eyes – as well as in the eyes of all of her other family members – and he loves her for her grit, determination and compassionate heart.

But why exactly did we start off by talking about the fight that Ruth Rodgers has. Well, that’s because her perseverance was put on full display earlier this year. After essentially being misdiagnosed, she sought a second opinion, and she is glad she did.

“I went to the doctor with a sore throat,” Ruth said. “I was told it’s cold season and to go home as it should pass. It wasn’t until it got so bad that my husband said, ‘Let’s go to the hospital.’”

And that is when Ruth got some life-altering news. It was not merely a sore throat, but cancer.

“At the hospital it was determined I had a tumor on the back of my tongue and throat,” she said.

So she went from thinking she just had a sore throat to being diagnosed with a tumor. It was a shocking turn of events, but it is a turn of events that would not have happened had her husband not pushed for them to go to the hospital.

Lucky for Ruth, however (or at least as lucky as could be in that situation), her tumor was caught early on. It was something that was treatable for the hospital and the doctors, although it has certainly been anything but an easy journey.

“I began treatment June 7, 2022,” Ruth said. “I was very positive at first as I was told it was a common cancer, but treatment was very hard with it involving radiation and chemo.”

However, Ruth kept up her spirits. While radiation and chemotherapy are never fun to go through, she did not ever give up. She kept up the good fight and did not look back.

But how exactly did Ruth keep up the fight on even the toughest of days?

Well, for starters, she is a very strong-willed individual who does not give up. Her grit and determination has been something she has had her entire life, but it is something that became very noticeable when she started going through these treatments.

However, there is another thing that Ruth attests her strength and determination to. She is a family woman through and through, and her family has had her back since day one. This rings especially true for her husband, as Kevin has been by her side 24/7 through this gut-wrenching journey.

“My husband took two months off work to stay with me during my treatment,” Ruth said. “At first, going to and from the hotel to the hospital by wheelchair was not bad. He pushed me for 40 minutes each way as the treatment progressed. The sickness made me tired and my body was shutting down, though. There were times where I wanted to give up. I received encouragement from everyone – family, friends, anyone who was aware of my sickness was there when I needed them.”

And that is what has been amazing about this journey. Ruth has not only kept up this fight for her and her husband, but also for her family. If there was ever a time she was thinking about giving up, she thought about her siblings, husband, daughter and son-in-law and granddaughter, as well as her parents and her brothers that have been looking down from above since Ruth started this journey.

And thankfully, Ruth has gotten through the worst parts of this fight. She has her family and friends to thank for this, but Kevin thinks that she should also be proud of herself for getting through what she got through.

“Once chemo was stopped, I continued with the radiation,” Ruth said. “Radiation finished July 26, 2022, and we came home.”

Once Ruth was finally able to come home, she was ecstatic. Although it did not mean the end of the fight and the journey, she was taking it one step at a time.

She had to deal with a feeding tube and losing a lot of weight, but she knew that it was what was going to help her feel better. She could not give up now, no matter how hard some days were compared to others.

“I had a feeding tube until December 13, 2022, where my diet was liquid through the tube,” Ruth said. “I lost 40 pounds, and getting my weight up is still very difficult as my appetite is not like it used to be.”

It might be difficult, but it is not impossible. Every day that Ruth pushes through is another day closer to fully recovering from this tumor.

“My throat to this day still hurts when I swallow and my taste buds have not yet returned,” Ruth said

However, as mentioned before, Ruth has a lot of optimism, and that is helping her cope with some of the difficulties she still deals with. She has been through so much and has fought through so much, and she deserves to be praised and honored for keeping her spirits up.

Ruth sees the light at the end of the tunnel, and she cannot wait to get there one day.

“Overall the journey is almost over, however it will still take time to recover completely,” Ruth said.

She thanks her family and loved ones for being there every step of the way, and Ruth’s family and friends want her to know how proud they are of her. She can get through anything, and she will always fight to be there for her family.

“Without the support and love from Kevin, I don’t know if I could have done this alone,” Ruth concluded. 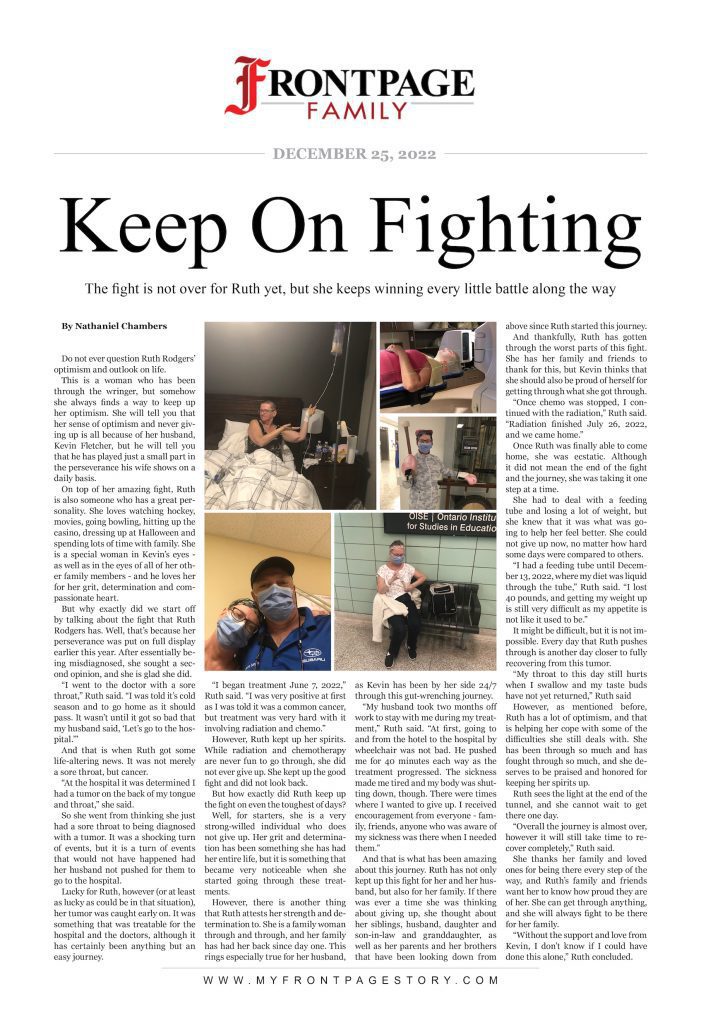