‘My Best Friend’: Lisa Petersmark is a mother, wife and exec who brings out the best in everyone around her

Brett Petersmark strutted into enemy territory feeling full of himself in his Eastern Michigan letter jacket. A buddy brought him along for the ride for a volleyball game in Michigan’s gym, and he had plenty to say to the 5-foot-6 dynamo whose name can still be found in Michigan’s record books.

Brett laid down a challenge once — “Go get another ace” — then twice, and a third and fourth time, and each time, Lisa responded by booming an ace.

All Brett could do in the moment was laugh when Lisa responded that she was just following his orders. In hindsight, that exchange was a perfect representation of Lisa and the fact that she seems to rise to every single challenge in her life.

“She is driven to be the best at whatever she tries,” Brett says. “She is an unbelievable team player and leader, which she loves to do. It’s no problem for her. She likes to let people do their own thing and find their own way, but with expectations.

“She is a driven executive and a warm and loving mother and wife who is still my best friend.”

Lisa is an executive now, but she studied kinesiology at Michigan and later got a masters in accounting and business administration. She spent time in accounting and seemed ready for a bigger, broader challenge, so she studied, worked every possible angle and learned every skill.

The same has always been true at home, where Lisa and Brett raised Courtney (26) and Justin (24) to be focused, well-rounded and hard-working. Lisa walked that tightrope between being a dynamic mother and an executive whose career path demanded long hours. From Brett’s perspective, she’s been phenomenal in both roles.

“She encouraged them to take their education seriously, but would also push them to find their own way,” Brett said. “She told them to not be afraid to go out there, make mistakes and take chances. Don’t be afraid to fail, but to learn from that and get better. She also taught by example because when it was time to do the work, she did the work.”

Maybe that was the athlete in Lisa talking, or maybe all the principles she learned on the volleyball court happened to fuel her incredible success in business. Either way, she and Brett have a connection to both worlds — he played football at Eastern Michigan and in the NFL — and they have a unique way of feeding off each other.

In that respect, it’s not just the kids who learn from Lisa and improve themselves.

Brett finds it hard to be in Lisa’s presence and not want the best for himself and their family. That’s the lasting impression she’ll always have on the family she loves so much: Lisa inspires all of them, Brett included, to be the best versions of themselves.

“I’ve always wanted to be a better person because I see it in her and want to be as fun-loving and driven as she is,” Brett said. “That’s one of the reasons we get along so well. We both want to just have a passion for anything, even with our family and friends. She just wants to live life to the fullest and then share it with others.”

Brett couldn’t feel more grateful that he not only gets that opportunity with Lisa, but that they are closer in their 29th year of marriage than they were in their first, fifth or 10th. So much of that credit goes to Lisa and her constant pursuit of excellence.

It’s almost like she wakes up every day with Brett challenging her to get an ace. 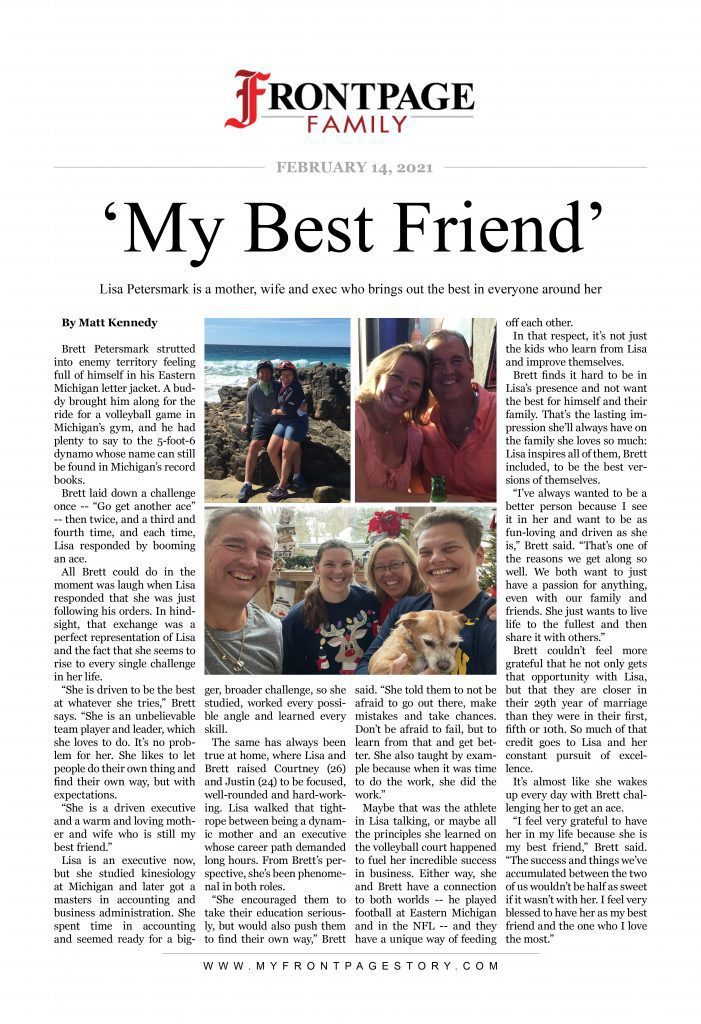