They say you don’t appreciate what you have until it’s gone.

For Suisse Derenbecker’s family, this statement is true in a different sense. Her family was always appreciative of everything she did for them, as she was such a kind, loving, and compassionate woman, but what her children did not realize until they were grown is what she had endured in her past.

One seemingly small example is her name. She was raised as Slavka in Praha (Prague) and needed to change her name to feel safe after escaping her country. She chose Suisse after the neutral country of Switzerland and this makes sense knowing that she had to leave everything she knew at the time of first Hitler and then a communist takeover.

Her husband and three children were always aware of the special things she did for their home and those who surrounded her life. She exuded coming from a perspective of life that made her choose joy.

This, Karen, and her two older brothers knew. They just were not aware as to all behind it until they were adults. Karen was the first to know, in her early 30’s, when her mother shared the journals she began back in 1950 once she reached London through Germany after leaving Prague.

Everything that Suisse was is because of what she went through in the past, as it helped shape her into the wife, mother, grandmother and friend she was in her later years. And while her family did know part of her story, they have learned throughout the years exactly what this lady from Prague had to go through to get to the States.

“My mother was born in Prague, Czechoslovakia and had to literally walk – and crawl – out of her country into Germany, leaving her family behind,” Suisse’s only daughter Karen said. “She was 17 years old writing against the Communist takeover.”

Talk about living life on the edge. During her escape from her own country, Suisse kept everything that she was experiencing in journals. One first in Czech and then another in English. She included her encounter with Ian Fleming, writer of the James Bond books,r as he interviewed her once she made it to London.

She showed her boldness and her sense of fearlessness from such a young age, and she did not ever let anything prevent her from getting the truth out there.

“My mother’s teenaged existence is something most in the US couldn’t begin to fathom,” Karen said. “My teen-self included. I didn’t know her story until my early 30s. She was writing for a newspaper in the late 1940’s in Praha (Prague) against the communist takeover, and at 17 – with the help of many – had to literally walk and crawl into Germany before getting to London and ultimately to America. There could be no goodbyes to her family due to dire risk.”

Just imagine having to flee your country without even getting the opportunity to let your family know. That’s exactly what Suisse did, for the sake of both herself and her family, and if it was not for her giant leaps of faith, she would not have ever made it to the US.

Fast forward to many years later and the whole embodiment of who she was. She was someone who wanted to always be looking out for others. Whether it was because of what she went through in the past or just because that is what her heart always wanted to do, Suisse always made it a point to put smiles on people’s faces and remind them to not take life for granted.

“She could never get enough of making everyone else’s day,” Karen said. “She kept a lot inside of her; there was a lot of pain and suffering that she went through that she kept inside of her. But her personality was just that she really cared. She was also a spitfire with so much beauty in her life.”

This is a woman who rode her bike everywhere even to get groceries. Many times she did so with Karen riding on the back basket. She decided to never get a driver’s license but not be completely dependent. She had a battle with cancer that required staples in her stomach. She refused any pain medication when they were removed. It’s not that she lived life on the edge, but rather she lived life with an appreciation that many people would not ever understand.

Suisse was a woman who was set on living life to the fullest, but also living life the way she felt she was meant to live it. She – and her husband – were all about traditions and keeping things simple, and Karen and her family have a newfound respect for this.

“My father was very colorful, and I could see why they wound up together,” she said. “They were all about traditions. There was nothing modern in her house.” Antiques were big for them and once empty nesters they travelled the country antiquing.

Suisse is someone who never took where she came from for granted, even when her family did not know about that.

“The big thing for her when she was fleeing to the states was leaving it all and putting her trust in people that were not like her,” Karen said.

Escaping during the Communist takeover was difficult enough, but escaping while trusting that the United States government was even going to take her side and be accepting of her took a whole new level of faith.

What Suisse went through was tough, and she kept it all bottled up inside for who knows what number of reasons. Her pain and suffering was part of who she was, but she never let it define her or make people feel any less of her.

“Part of me is mad at her,” Karen said. “If she would have told me when I was younger, I would have made different decisions. A lot of me is mad at myself for not understanding, and also for some of the things I said. A huge part of me loves her even more, though. There are a lot of things I wish I could have said that she would not have accepted, because she was never about herself.”

And that’s just it. Suisse never wanted to bring attention to herself or have people feel bad for her because of what she went through decades upon decades ago. That’s not who she was.

“I wish I could have held her hand knowing her story the way I know it now,” Karen said.

Suisse made such an impact on so many people without even bringing up her past, and that speaks volumes about who she was as a person. She cared so much about everyone and was always looking out for others, and she was someone who could turn a room of strangers into a room full of friends.

“Mom was someone who stopped a room as she made everything better in a way you couldn’t quite put a finger on,” Karen said. “She was adored for her eloquent forthrightness. From special European crafting and cooking to worldly and uplifting life advice, she fascinated you. Her accent was captivating. Most of all, her tenacity through many esoteric life events dubbed her untouchable by despair’s grip… and authentic.”

Suisse’s genuineness was amazing, and it is a trait that not enough people in this world possess. She was never a woe is me person, but instead she used what she experienced in her past to be a stepping stone to living the best life possible. She is remembered so well, even to this day, and she is appreciated even more now than she ever was before.

Karen knows that her mother is looking down on her with that amazing smile on her face, and she is truly grateful for all the memories. The legacy Suisse left here on earth is continuing to grow with each passing day, and Karen knows there will always be more to uncover.

From her journal: “ I walked along the river Thames…I sat and looked down into the water. It’s so beautiful. I wondered if people ever take time to look at the world. Do they see things-really see them- or is everything just a painted backdrop? I wonder??” She was seventeen approaching eighteen in three months when she wrote this.This is just one example of the many writings of Slavka’s that really portrays her amazing outlook even after having seen so much at such a young age.

“I cannot imagine how scared, alone and heartbroken you must have felt. You made the best of everything. I know this through your journal. You wrote of heartbreak but not of being scared. That’s your secret to being open, to know others and love most. Your faith and concern for others had no room for fear at the time. I am forever blessed for you as my mom and inspiration. To hug you and have your hand in mine again.” – Karen 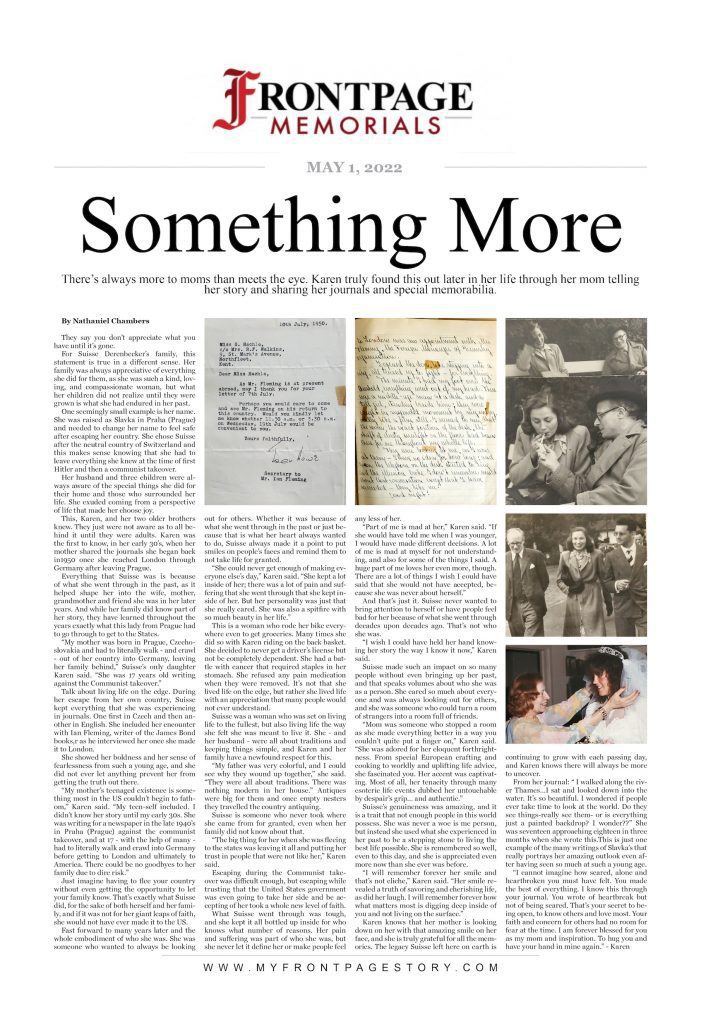