‘A true friend’: Diana Adams is beloved for her selflessness and her heart to serve children 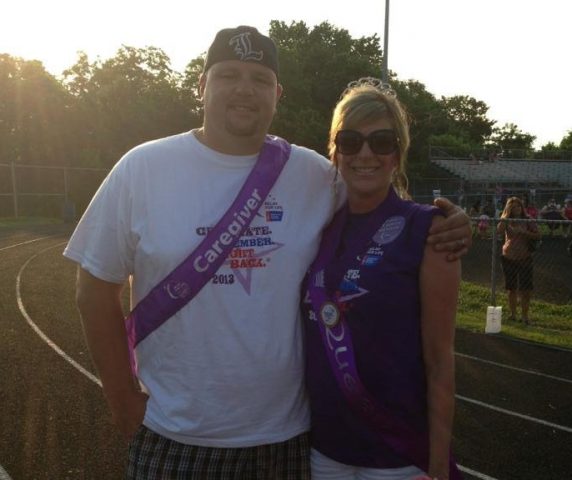 Diana Adams had no idea how much her life was about to change when she agreed to make a bold move from California to Kentucky. She had known her future husband Doug for a little while, but had just started dating him when he got the news of a job opportunity across the country.

“I told her this is something I can’t pass up,” Doug said. “I would love for you to come if you’re willing to go, but if not I’ve got to go. It’s something I worked very hard for. She packed her and her daughter up and came with me. It says a lot about her. That’s a chance letting someone chase what they’re doing.”

Doug and Diana got to know each other for a few years before they started dating. Diana went from trying to fix Doug up with her some of her friends to calling him when he hadn’t stopped by in a while with a demand to come see her.

If Doug hadn’t known by then that Diana was a rare kind of woman, he was about to find out.

“I was in Nevada driving home,” Doug said. “She called me and said, ‘Hey, you haven’t been to my bar in a while, come see me. I went down there and had a couple beers, and when I left, I said, ‘The ball is in your court.’ She took me out to a steak dinner, and she paid. She wouldn’t let me pay. I tried.”

Diana has always been one to make sacrifices if it meant helping someone else. In Doug’s case, she had to make a determination early in their relationship if their kind of young love had the potential to go the distance. She gambled on him and supported him chasing his dreams, and in the end they both won by finding each other.

The move to Kentucky happened in 2007, but Diana got another surprise when she was diagnosed with breast cancer in 2012. She fought the disease and beat it, all the while she stayed focused on affecting change in her new community. Diana ran a daycare out of their home, did missions work and loved on as many kids who could use it.

“We fought that, and we won,” Doug said. “She’s a very strong-willed person, and she has a lot of love for kids. She’s got a lot of integrity. She wants to make a difference. You can walk this life and be happy or whatever, but if you aren’t affecting change, it doesn’t matter.

During her breast cancer fight, Diana found a friend in Melanie Fernandez, who was part of her support system through the process. Diana had her good days and bad, but approached them all with the right amount of perseverance and humility.

Diana showed her caring side later — many wonder if she even has another side — when Melanie and her family were in need.

Melanie was in California and her son was in North Carolina at a college that turned out to be a scam. Diana and Doug had moved to North Carolina by then, and she took Melanie’s son under her wing without question until Melanie could make her way across the country.

“I couldn’t have asked for a better person,” Melanie said. “She’s extremely thoughtful and hardworking. She showed that to me. She was very protective of my son. She stepped in that role for me. There are not enough words to express how thoughtful of a person she is and how hardworking she is.”

That wasn’t Diana’s last experience helping a kid in need. Far from it. She and Doug have dedicated their lives to young kids, both in their own home and internationally. They are committed foster parents who lean on each other through the ups and downs of trying to impact those lives.

Kids land in foster care for all kinds of reasons, but are almost always powerless of their circumstances. Doug saw it in his own life growing up as one of the lucky kids in his neighborhood to have all the food, clothing and love he needed. He and Diana both agreed this was something they had to do.

“It’s always been on my heart,” Doug said. “We know there is a need for it. We started going to church and watching other people do it and said, ‘Hey, this is something we need to get into. Why not try to help these kids out?’ It’s not their fault they’re stuck in the situation they’re in.”

Doug and Diana lean on each other during the rollercoaster ride of foster parenting, just as they lean on each other in life. They are perfect compliments for each other, their friends say, but Diana makes it easy on Doug. She offers the truest, purest, most selfless form of love that makes everyone close to her feel lucky for knowing her.

“Diana is the definition of a true friend,” friend Christina Gouvela said. “No matter where life has taken us, the struggles that our friendship has been faced with or the curveballs life has thrown us, I always know that she is just a phone call or plane ride away. She is a wife, mother and dear friend.

“Diana has been there for me in my lowest and highest points and I hope she is able to say the same for me. Our dear friendship is one that I do not take for granted. We can always pick up the phone and gab like no time has passed. I love this girl like a sister. My life is better with her in it.”

Doug couldn’t agree more. From the time Diana moved with him on a whim, to the way she extends her heart to kids in need to the way she fights for herself and her family, he couldn’t be thankful for knowing her and being loved by her.

“I’m pretty simple,” Doug said. “I just want her to know I appreciate her. There’s nothing else I can say. I love her to death.”“I really appreciate her.” 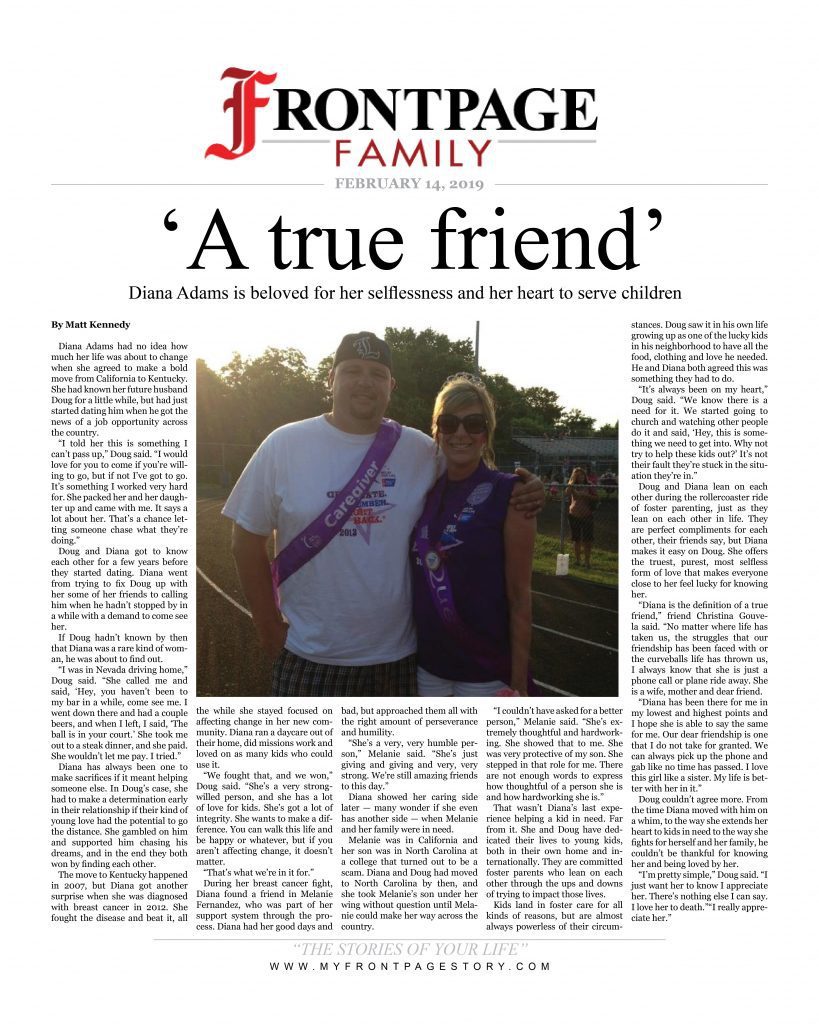